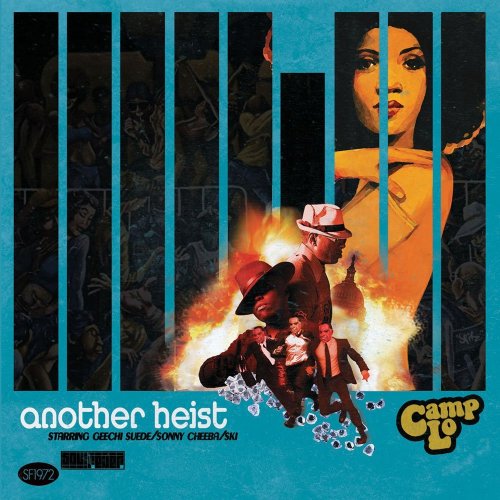 As an artist, the thinnest of lines are the ones between growth, signature style, and success or failure. Camp Lo hit the music scene hard with the debut album Uptown Saturday Night which featured hit singles like “Lucihini (This is it)”, “Coolie High”, and “Black Nostaljack.” However, since then, they’ve been trying to recapture that fame. This album is at least a return that formula after releasing Stone & Rob: Caught On Tape, an album that seemed to focus solely on being a sound in efforts to grab more fans. They abandoned the sound that we are familiar with and the cinematic quality of the composition of the previous 3 albums. The disconnect can largely be attributed to the absence of Ski and his ability to create a complete sounding album (he only produced one track…and even that didn’t sound like what we’re used to for this group). Now that he’s back, let’s see if how this screenplay comes together and if those lines are noticeable.

Another Heist
Produced by Ski
Staying true to from, we get a high energy, head-nod track to start the album. I liken this track to the action sequences of the Blaxploitation flicks they emulate not only in sound, but naming convention and method. I can see them kicking in doors, yielding weapons, and demanding the respect that has seemingly escaped them up to this, their 5th “Audio Picture”. The guitar licks don’t stop and the simple drum pattern plays well to blend with the music and let the guitar and the deliveries take precedent on this intro.

Uptown
Produced by Ski
This is one of those scenes that if you miss part of it, no one is going to reach for the remote and rewind it. It’s not a bad song, but after such a funky kick off, this track sounds like a tertiary thought to seemed to be the mood and thought process of the intro song. Cheeba does a fantastic job of weaving words together into what is known as one of the smoothest deliveries in the game. Other than his contribution to this one, there isn’t much to note about this song itself. Scene.

Satin Amnesia
Produced by Ski
Hello signature sound. Smooth track, melodic celebration of chords, harps, and xylophones, this song sounds like the montage of sex and good times between the protagonist and the object of his affection. Not coincidentally, the song is lyrically about the same setting. I think the hook could have been done a little better, but I’d be nitpicking. I really enjoy how this track feels and the picture painted when it all converges on this track.

Get Em Lo
Produced by Ski
This episode finds our duo draped in bongos and more 70’s excellence as they play the vigilantes to fake ones in the game. I think this feature has the most action in this movie with a frenetic pace and relentless action. This is one of the most captivating songs on this album.

Boogie Nights
Produced by Ski
We arrive as The Lo get ready to hit the streets. Sped up sample in tow, more bongos and drums, they pack up and provide another song that I can almost see the video for as well imagine using this to set the table as we pre-game for the night. Ski typically plays with instrumental samples and chops, but this singing on this one is a nice injection into an already enjoyable sound. With a hook that tickles us old heads that remember those Martini and Rossi Asti Spumante commercials and a dance between the different flows, this caper goes off without a hitch.

Son Of A…
Produced by Ski
Make no mistake, this is an action sequence in the movie. From the funk of the bass and the anthemesque chords that frame this track to the noticeably absent body of the sound this one will leave you waiting for the other shoe to drop. Don’t get too close to the edge tho, at a brisk 1:36, this is merely a interlude/bridge to the next scene…

Good Green
Produced by Ski
…which kicks in with a smooth transition and retains the kick and knock of the previous song even though the tempo is drastically different. The title leaves no mystery as to what this one is about, just depends on how you hear it. Green typically means one of two things…. That aside, while the song is cool, it’ doesn’t really seem to fit the rest of the album.

Beautiful People
Produced by Ski
As Sonny, Geechi, and Ski enter the disco, I picture the scene complete with velvet, bell bottoms, and powerful Afros. Don’t forget the band on stage dippin’ in synch as the club patrons two step with each other like the best choreographed video. This song is almost a direct port of the 70’s show tune sound and the Blaxploitation era that the crew uses to inspire and drive their careers in the biz.

Bionic
Produced by Ski
I get the attempt on this one, but I don’t like it. With so much soul being present in the rest of the album and a distinct harmony from track to track, this track’s slightly off melody and dragging beat make this one better left on the cutting room floor. Not that it’s a bad song, but it is terribly out of place. This is even more evidenced by the lyrics that seem to go on, but not really tell much. There seems to be an attempt at painting a scene but the missteps of dragging out the word A-A-A-A-ATUMN make this song come off as a lazy filler.

Black Connect 3
Produced by Ski
They really could have used this song to end the album. This song paints the illest scene on the album and is definitely one of the songs I’d use to make a Best Of album. With tag team style reminiscent of the great Hip Hop duos like EPMD, Run DMC, Nice and Smooth, and others, they really are at their best on this one. The sample and meticulously musical orchestra make this track one of Ski’s most enjoyable music offerings to the group. Even at 4:27, I’m not ready for this one to end when it does.

Love It Then
Produced by Ski
I don’t know if it’s possible to go wrong with a Stevie sample, and thank god they don’t prove otherwise. The music on this one is really on par with the last one and even tho the hook isn’t solid, the scene is flawless as our crew hits the city again with the ladies in tow. Again, nothing bad to say about this one other than the hook being a problem, but the song is dope as hell. With songs like this, what the hell were they thinking with that last album?

Uptown (Remix)
Produced by Ski
It’s been a minute since I’ve heard 3 songs come off as strong as these last 3 have for this album. Like I said above, this song should have been THE version for the album and the previous offering should have been edited out. The El Debarge sample on the hook and this being the slowest song on the album almost lead your right back into the first song which is the second fastest offering on the movie that we are calling Another Heist.

Bottom Line:
I’ve never thought growth was a product of abandoning your style, but more-so the child of perfection of what you’ve been doing. I support expression and changes in pace, but it doesn’t always lead to success. We could almost do an entire week on artists who tried to “grow” while doing something different and ended up stifling that very aspiration in the process. Every group can’t be Outkast and consistently reinvent themselves on a level where others are still trying to achieve with familiar surroundings. This album is a great return to from and the cohesiveness and style that made us fall in love with the group when we went Uptown Saturday Night. They don’t capture lightening in glass again with this album, but they do provide another enjoyable movie to the Camp Lo studio and leave us looking forward to yet another offering. There are some definite signs of the magic that we remember, and I already can’t wait til the next soundtrack comes out.