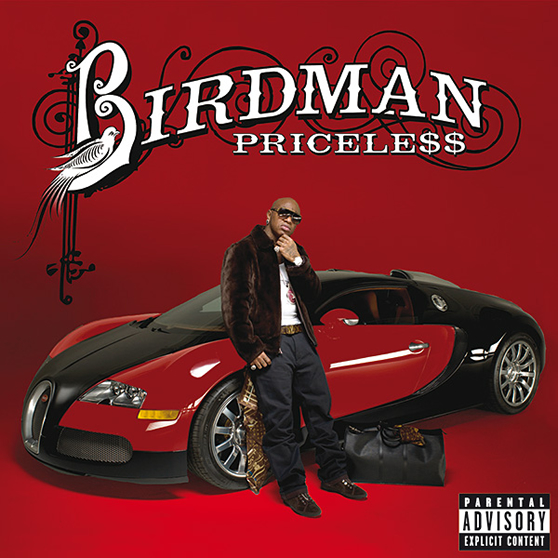 The respect for Bryan “Birdman” Williams has always been mixed. While he will always be applauded for building his New Orleans based Cash Money Records from nothing (With his brother Slim), his music abilities have always been called into question. Personally, I think this isn’t exactly true. Yes, most of the time when a featured verse of Birdman comes up, I’m usually not checking for it. But to say Baby never spit anything notable is a false (Example: “#1 Stunna”, His verse on “Playa Why You Hatin'”, “What Happened To That Boy”). Of course these moments are rare but they exist.

In the past Birdman’s album have received modest success. Nothing really mind blowing in terms of material, but what do expect from a self proclaimed “game spitter”. Now Stunna is releasing his 4th album Pricele$$. And yes, it once again heavily features his son Lil’ Wayne. And yes, Drake makes a few appearances too. Does this make Pircele$$ worth your precious time? Let’s see.

1. Intro
Produced by T-Minus
On the albums intro, Birdman goes into the usual: He’s from uptown, his youngn’ wears the crown, shouts out to Cash Money/Young Money, and throw in some bird calls for good measure. Besides that, the beat is nice and has a big feel to it. Lyrics? Uh, “The pussy wet so the pussy got a new plug”. *Shrugs*

2. Been About Money
Produced by I.N.F.O.
The one thing that jumps out on this track is that it used a Birdman sample as the hook (“Been about big money. B-b-big money”). Don’t ask me where the sample is from (It’s “Youn Ain’t Know”. Thanks Pitbull) . I also don’t have to tell you what Baby’s topic here: “Keep some extra clips/Keep some extra diamonds/Keep some new whips”. The beat is slow and what you’d expect from Stunna (It even has bird calls in the background. Get used to that…). Average track.

3. Money To Blow
Featuring Drake & Lil’ Wayne; Produced by Drumma Boy
Banger. Yea, I said it. Drake kills this one from his verse to the hook (Wasn’t this his song first?). The Drumma Boy beat is strip club ready for sure and even Weezy comes to do cleanup on the last verse and states the know infamous Young Money/Cash Money strategy (“And we gonna be alright if we put Drake on every hook”). The weak link of course is Birdman. But it can be overlooked here.

4. Money Machine
Produced by Howard “X-Fyle” Metoyer
This one is similar to the previous “Been About Money” as it also used a Cash Money sample for the hook. This time is uses Wayne’s “Bitch I paid/Is all I gotta say” (I think it’s from “Pop Bottles” “Stuntin’ Like My Daddy” (c) Pitbull). At first I was getting ready to write this song off until it got to the halfway mark and the beat changes up. Then shit gets kinda live. Plus Birdman sounds okay here too; “The motor change nigga/So the watch with the meter/Catier face every time that I see her”. Standout.

5. Pricele$$
Featuring Lil’ Wayne; Produced by Jim Jonsin
This wouldn’t surprise me if this was from a Rebirth session seeing that on the hook Weezy is doing his Rock/Auto-Tune thing. I guess it fits because the beat is definitely Rock & Roll inspired. But for some reason, the mix of this and Birdman uninspired lyrics don’t match up (“Keep a bad bitch and put the diamonds on my teeth/Presidential suites/Rumors bout me”).

6. Bring It Back
Featuring Lil’ Wayne; Produced by Laurent “Slick” Cohen
This may have been better if they would have put more room between it and the previous track. They’re both similar. Wayne’s just on the hook again (Again with Auto-Tune). Whatever spark this track had was shot down with Baby’s lazy rhymes: “Flip another hundred/Get another hundred/Spend another hundred/Burn another hundred/Fuck another hundred”. This track will make you feel as bored as Stunna sounds.

7. Nightclub
Produced by Howard “X-Fyle” Metoyer
For a track called “Nightclub”, this track is surprisingly slow. Actually it’s kinda lackluster. The piano heavy production and Birdman lyrics gets that way after the first few lines. It’s not a skip but don’t play this while heading to the nightclub unless you don’t want energy. Ehh…

8. 4 My Town (Play Ball)
Featuring Drake & Lil’ Wayne; Produced Boi-1da
Almost the same formula as “Money To Blow” and while not as successful, it’s a pickup from the previous song. I wasn’t in love with the beat but it works. This is not one to look for Birdman but Weezy does have the line of the song; “I’m a big smoker/I’m a little drinker/The peace sign is just a trigger with a middle finger”. You may have already heard Drizzy verse as it had been chopped up as used by a few rappers already (Soulja Boy for example).

9. Hustle
Featuring Gudda Gudda & Lil’ Wayne; Produced by Drew Correa
The hook on this takes this one out before it even really gets started. Of course it’s Weezy on the Auto-Tune but that’s not really it; it’s just not executed well for this beat and sounds like a freestyle. Gudda does okay (Sidenote: I just realized he was from Sqad Up). As for Stunna, uh, you know what to expect.

10. Shinin’
Featuring & Produced by T-Pain
T-Pain comes through and does double duty. But Teddy doesn’t bring his A-game (Would you?). The beat sounds like it may be just a placeholder and would worked for almost any rapper with it 808’s and what not. But sense it’s Birdman, he can’t really take the song to the next level (Or the first level). Generic track. If you already heard “Got Money” by T-Pain and Weezy, you’ve already heard a better version of this.

11. Mo Milli
Featuring Drake & Bun B; Produced Boi-1da
Dang, Stunna gets Drizzy to help out for a third time. Actually, its just Birdman rapping first and standing back as Drake and Bun (Who wasn’t on the early version of this song) do their thing. The nicely done beat by Boi-1da sounds like a mixture of Houston and “A Milli”. By the way, is this a sequel to “A Milli”? Check this song out for the Bun B and Drake verses.

12. I Want It All
Featuring Kevin Rudolf & Lil’ Wayne; Produced by Kevin Rudolf
I always wondered why Cash Money signed rocker Kevin Rudolf. I hope it wasn’t to collaborate with Birdman and do his hooks, because they don’t mix well. The whole techno sound here doesn’t work either. Wayne shows up and leaves fast too. Nah.

13. Always Strapped
Featuring Lil’ Wayne & Mack Maine; Produced by Mr. Beatz & Lil’ C
By now I hoped you heard this track. I’m surprised they this version instead of the original (Which just featured Birdman & Wayne) or even the remix with Rick Ross & Jeezy. The beat is still hard on this one and Mack Mane’s “I fuck over you like I’m sexing on a top bunk” line is always cool. Worth another listen.

Bottom Line:
Another Birdman album in the books and to me it’s what it’s always been. You look at the album and basically check for the Wayne features (Now add Drake to that list too) and almost skip everything else (Stunna solo on “Money Machine” was good though). I think one thing that really is shown here is Birdman inability to do a whole album. His rhymes are repetitive as is his subject matter to take. Then again, if you are buying this album, you probably don’t care about that. If you like Birdman’s previous efforts, this one will fit right in. If you just looking for the features, you probably should just get those track and move on.