Clipse – Til The Casket Drops [Review] 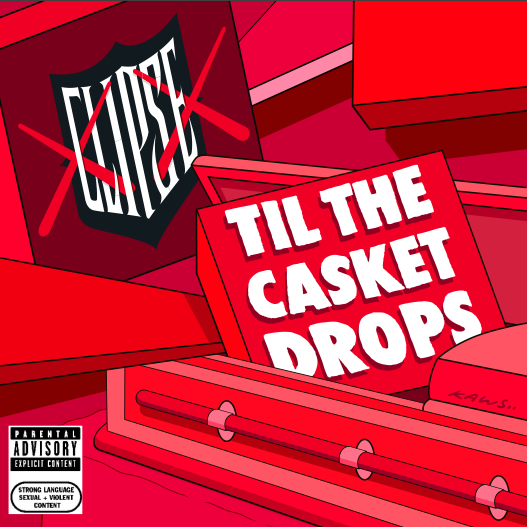 What can you say about Clipse? I can say that they are a very underrated Hip-Hop group. You know, the type that everyone knows makes good music, but were never exceptionally successful commercially. Hell Hath No Fury was definitely one of the albums of the year back in 2006. But at the same time, it launched without a Top 40 single and hasn’t even gone gold yet three years later. Now, Clipse is back with Til The Casket Drops. Despite the absolutely horrible cover, Clipse looks like they’re in position to drop another very good album. Let’s see what they bring this time around.

Freedom
Produced by Sean C & LV
The beat on this one is HARD!! The sample might catch some off guard a little bit in the beginning, but then the beat hits you hard in the eardrum with it’s pounding drums and guitar riff. Both Malice and Pusha T showed up for this one, but I feel like they coulda did a little bit better lyrically. Still, for an intro, it’s hot as hell. Good song.

Popular Demand (Popeyes)
Featuring Cam’rom & Pharrell; Produced by The Neptunes
On the first listen, I’m not gonna lie, I wasn’t exactly feeling the beat. I wanted to like it, but it sounded like another recycled Neptunes production. The beat got hotter each time I went back to listen to it, and now I’m liking it. I’m DEFINITELY not feeling the hook, Pharrell messed it up by making it too long. Cam’rom’s verse was good, but he messed up big time by half-singing/rapping his verse like Pharrell did the hook. Both members of Clipse came solid with their verses, but overall it’s just an OK song.

Kind Of Like A Big Deal
Featuring Kanye West; Produced by DJ Khalil
This was the street single for the album that got everyone excited. The beat is hot! The hook is simple but enjoyable, with Pusha T doing his best Kanye-impression. Kanye himself went IN!!! I could hardly believe his flow on this track when I heard it:

“Spittin’ fire on the PJ in my PJ’s
Fire Marshall said I took it to the Max like TJ
Yea people I said Marshall’s we play
I guess I’m like the Black Marshall meets Jay
Meet Ye’ alligator souffle, got it made
Special Ed got head from a girl in special ed
Ya know the pretty ones in that dumb class
But she got that dumb ass
Hit high school and got pregnant dumb fast
What happen Tisha, your boyfriend come fast?”

Damn. Kanye needs to make an album NOW!! Clearly, ‘Ye out shined the others; with lame lines like: “Got me looking to the heavens like a javelin throw”, how can you expect to shine? Still, great song.

Showin’ Out
Featuring Yo Gotti; Produced by The Neptunes
This song overall is just OK. The beat is hot, again, and lyrically there are some wow moments (“Seein’ through your poker face, that nigga bluffin’/Ladies goin’ gaga for a nigga tryin’ fuck him”), it just doesn’t stand out on the album as a whole. Yo Gotti doesn’t spit anything too memorable, but I can see why they put him on here; this is the kind of music he makes and he feels right at home. Still, nothing really make this track better than the others on the album.

I’m Good
Featuring Pharrell; Produced by The Neptunes
The official first single off the album. I don’t care what anyone says about The Neptunes, when they want to, they can deliver beat-wise. THIS SONG IS MY SHIT!!! Plain and simple. When I first saw the music video for this, I was singing along to the song and everything. Damn. Anyway, both Malice and Pusha went in on this one:

“Man I’m killing it, riding in that brand new
Swimming through the streets, looking like I’m Shamoo
In that big body, with the wet paint
I got some pocket change, from selling wet weight
Today is a good day, ice cubes on my chest
Looking at my Blackberry, freak hit me on the text
Come and beat it up, I just need a minute
You can K ya ass, you ain’t gotta lay in it (Yes!)”

“Finally I’m free, all my dues paid
Them yellow diamonds got the charm like it’s Minute Maid
And I’m lookin’ good, and I’m feeling good
Try an’ stop my shine–I wish a nigga would”

Damn! Pharrell delivers a hook that’s not just good, it’s beautiful! Well, I mighta exaggerated there, but it’s nice. Great song, one of my top picks off the album.

There Was A Murder
Produced by DJ Khalil
I like Clipse’s flow on this one, but the whole song has me up in the air about it. It’s a semi-reggae style beat but it’s questionable (The jury’s out on the hook too). This is one of those hard songs to judge because some people will love it, and others will hate it. So I’ve got mixed feelings on this one.

Door Man
Produced by The Neptunes
Damn! This song is what we call a BANGER!! It’s a little too long, clocking in at a little bit over 5 minutes, but the hook is hot and Pharrell adds to the song through an uncredited background vocal that adds to the song. I’m feeling this one; Clipse rides the beat well (While neither spits anything too memorable). This one would definitely scorch the clubs.

Never Will It Stop
Featuring Ab-Liva; Produced by Sean C & LV
Nah, I’m really not feeling this one. This song doesn’t exactly sound out of place but at the same time just isn’t as good as the previous tracks. The beat is hard (again), but at the same time Ab-Liva isn’t really adding anything to the track and Clipse barely shows up here. SKIP!!

All Eyes On Me
Featuring Pharrell & Keri Hilson; Produced by The Neptunes
Neptunes did it again on this one. This beat is absolutely club ready and I could see this tearing up the radio. Keri Hilson’s hook is infectious and the beat backs her up sounding like that “red carpet runway” kind of shit. Clipse pretty much knew they didn’t have to show up for this one and you can tell because they sound nearly asleep on this. Still, it doesn’t really hurt the song because Keri Hilson does most of the work. Good song.

Counseling
Featuring Pharrell and Nicole Hurst; Produced by The Neptunes
Neptunes did it AGAIN!! Man, why do ya’ll hate on The Neptunes when they bring beats like this?!?!? Pharrell showed up for the hook once again; he kept it simple and infectious this time and is a good formula he should follow more often. Nicole Hurst’s role is that of the “ooohhs” over Pharrell’s hook, but she still adds to the song with her verse towards the end. Clipse once again didn’t really go all out here but again its acceptable because the whole song works so well. Great song.

Champion
Produced by The Neptunes
OK, now I know why people hate on The Neptunes; they blatantly recycle their beats. I swear, this sounds EXACTLY like “Loose Wires” from Kenna’s album Make Sure They See My Face back in 2007. The beat sounds way too distant and Clipse is barely trying at this point to me gliding through their lines till they get to the hook. It worked well up until now because the hook was so good on the previous songs but here there is no excuse. The girls singing back up help the song a lot though. It’s not a skip but very forgettable.

Footsteps
Produced by DJ Khalil
Nope, not feeling this one. SKIP!!

Life Change
Featuring Pharrell & Kenna; Produced by The Neptunes
Seeing both Kenna (One of my favorite singers out right now) and Skateboard P on the track together got me interested. P is using one of his talking-style hooks right here, but Kenna definitely showed up. While he only sings one line he makes it infectious. The beat on this is very electronic; something I’d expect seeing Kenna on the track because that’s usually the beats that he usually sings over. Clipse is rapping really well on this one and actually show up with good flows. It’s a good rebound from the past couple of missteps. Great way to end the album.

Bottom Line:
I’m not just saying this because I’m one of the few Neptunes fans left, but I feel like Clipse shoulda just taken all Neptunes beats on this album (With the exception of “Freedom” and “Kind Of Like A Big Deal”). All the best beats on this album come from The Neptunes. Not that the production was bad; it was nearly impeccable! But this album is a good example of the fact that a good beat can only help you go so far. On some of these songs, Clipse sounds asleep or even bored with their own lyrics. This definitely is a step down from Hell Hath No Fury, but it’s still a pretty good album that wouldn’t disappoint if you picked it up in stores. Clipse did a good job here and hopefully new music from them will come sooner than later with the quality stays at this level.