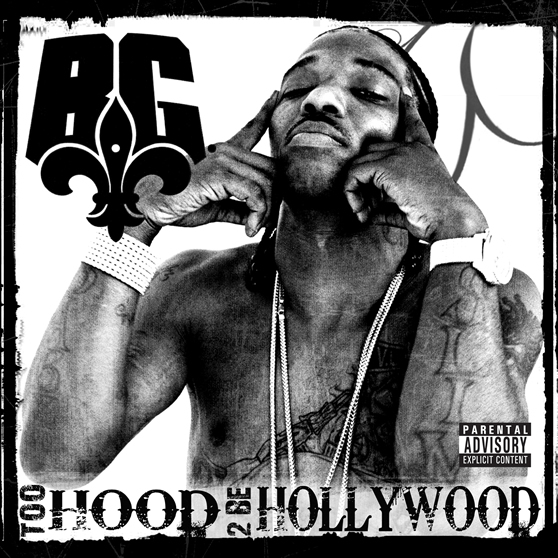 After over a year of delays, B.G. finally returns with his 11th album Too Hood 2 Be Hollywood. While I’m happy to see B.G. back on the game, it’s a bittersweet return for the New Orleans veteran.

You can immediately tell that this is a step up from his previous recent efforts like The Heart Of Tha Streetz, Vol. 1-2. On the album he has features like T.I., Lil’ Boosie and even an (almost) reunion of the Hot Boys with Juvenile and Lil’ Wayne on the same track. The production side is the same too. Notable names like Scott Storch, Cool & Dre, J.U.S.T.I.C.E. League, and even New Orleans Hip-Hop greats KLC and Mannie Fresh all show up here to get behind the boards.

But we all know execution is very important and this where B.G. slips. While the tracks like the Soulja Slim, C-Murder & Lil’ Boosie featured “Nigga Owe Me Some Money” work in some ways other features like the T.I. assisted “4 A Minute” (Who only does a bridge at the end) end up sounding forced. The Weezy, Juve, Trey Songz featured song “Ya Heard Me” looks good on paper but the lack of chemistry won’t have you looking forward to the speculated Hot Boys reunion album anytime soon.

Songs also tend to sound very similar in name and production (See: “Fuckin’ U Right” & “Fuck Thang”). It even gets worse when he tries to recreate one of his biggest hits with “Chopper City Is An Army”.

There are still some bright spots here. Songs like “Hit The Block & Roll” and “Like Yeah” (Where he raps about popping pills while even acknowledging his past drug addiction) make you remember why people check for B.G. in the first place.

Bottom Line:
If you a hardcore fan B.G. or even New Orleans style Hip-Hop I won’t need to tell you to grab Too Hood 2 Be Hollywood. If you’re not familiar with B-Gizzle’s music, you may need to go back to older albums to get the full effect and a better introduction.