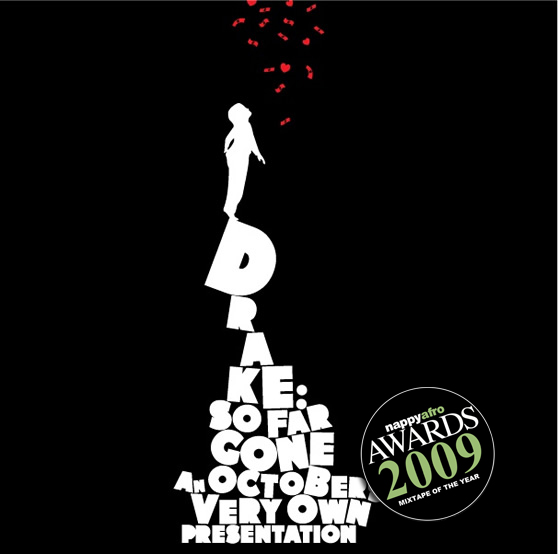 As the staff member that broke Drake to the site…ahem…It is my PLEASURE to announce his So Far Gone as nappyafro’s Mixtape Of The Year winner for 2009. If you don’t agree, let’s go over some simple facts about this mixtape. He’s nominated for a Grammy from a mixtape that came prior to any album release or even major label deal. This mixtape single-handedly propelled Drake into the stratosphere and has Vibe calling him Hip Hop’s new religion. It’s hard to deny that “Successful” alone, reintroduced the world to Trey Songz and reignited his career as well. Lastly, who releases a free mixtape THEN turns around and takes that mixtape and sells over 200k copies? Ok, so for those of you that are hard to please, MTV and Complex Magazine agree with us with Complex going as far as calling this one of the top 5 mixtapes this decade. Simply put, Drake has managed to put his fingerprint on a career that may see him release classics in R&B and Hip-Hop, and that is proof that he is So Far Gone from the nearest competitors for this award.

Runners Up:
Lil’ Wayne – No Ceilings
J. Cole – The Warm Up
Wale & 9th Wonder – Back To The Feature