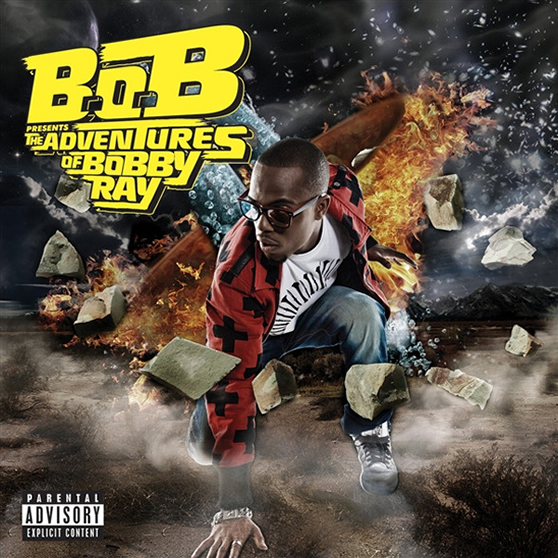 What can be said about Bobby Ray Simmons that hasn’t been said before? Yes, he does sound like Andre 3K. Yes, his latest his song “Nothin’ On You” has gone Platinum and hit #1 on the Hot 100 chart. And yes, he is the most successful and hyped artist to come out of T.I.’s camp since Young Dro, only more so. After several push-backs and delays, some name changes, and the crafting of one of the sickest covers to come out of Hip-Hop in a long while, B.o.B is ready to drop his debut album. Let’s check it out.

Don’t Let Me Fall
Produced by Bobby Ray
The beat on this one is dark and pulsating, immediately reminding of Kid Cudi’s album last year, especially with the singing/rapping combo. I like the piano instrumental, but the guitar over the hook is questionable to me. The rapping is good, I like the flowing over the track, but B.o.B isn’t lyrically the best. He does come with some impressive lines on this one: “Product of Cast Decatur home/Cause I was in the cold, tryin’ to keep my toes unfroze.” Still, I’m not gonna hold this over him because this a pretty good song.

Nothin’ On You
Featuring Bruno Mars; Produced by The Smeezingtons
I’m not gonna talk a lot about this track because its far too played out at this point, but this jump started the career of Bruno Mars and finally got B.o.B the mainstream attention he needed. The hook is catchy as hell and the beat is smooth too. Basically, this was the perfect first single. It’s annoying to me now though.

Past My Shades
Featuring Lupe Fiasco; Produced by Crada
I’ve been a Lupe fiend for a while now, so seeing him and B.o.B on a track together immediately piqued my interest. When I first heard it, I was unimpressed, but I really like this track now. B.o.B’s singing here completes the track in a great way, but again, his lyricism leaves much to be desired. Lupe, however, kills this track! The accent he uses for much of the verse is annoying, but he comes with a couple cool lines: “Bobby Ray, you know you got my number/And them dere (deer) can’t see us like hunters.” Great song.

Airplanes
Featuring Hayley Williams; Produced by Alex Da Kid & DJ Frank E
The second single off the album, another great choice. Hayley Williams delivers a great hook that is slowly taking over the airwaves, while B.o.B spits a rapid fire flow over yet another rock/rap combo beat. At first I didn’t really enjoy this track, but it grew on me with the catchy hook and the emotional beat. Let’s be honest here tho; B.o.B isn’t spittin’ anything memorable here, although I do give props to his message to return to the music of the rap game instead of the politics. Good.

Bet I
Featuring T.I. & Playboy Tre; Produced by A.D. & Kutta,
This posse track is really hot! I like how during each verse, the beat switches from simple, 8-bit style music to full produced club music. B.o.B and Playboy Tre both turned in pretty respectable verses, but T.I. is the one who stole the show on this track: “And I’m still representing/For the niggas in the prison yard still out listening/I’m bout to do a big thing, sucka looking for me? Start in your bitch dreams/I’m 20 ft tall standing on the big screen, getting dough, getting green, my flow sickening/It’s the king, nigga!” Damn. Check out the music video here.

Ghost In The Machine
Produced by Bobby Ray
The Kid Cudi comparison fits very well right here; the theme of loneliness and the darkness of the track reminds me of what I listened to from Man On The Moon: The End Of Day last year. Still, B.o.B sets himself apart through the upbeat singing /rapping that shows him being happy and OK despite the bad things in his life. It’s a long song, but the instrumentals get stronger and stronger as the track moves on, so it’s definitely worth it to check out the whole song.

The Kids
Featuring Janelle Monae; Produced Alex Da Kid
This song is about kids in bad neighborhoods, and how their prospects are slim. B.o.B connects the song’s theme in with his own life and hits us with an almost Carribean style flow and singing here. Janelle Monae fits on here perfectly, singing her own verse and assisting on some background vocals. I didn’t really feel either way about this song at first, but it’s starting to grow on me more. Still not completely sold though. Check out the original Vampire Weekend version here.

Magic
Featuring Rivers Cuomo; Produced by Dr. Luke
This song is a guilty pleasure. It’s so blatantly pop that you want to hate it because it almost sounds like those songs you hear on Disney Channel, but the hook is so damn catchy and B.o.B’s rhymes are witty as hell, going with the magic theme. “See, I deceive ya with my intergalactic ether/I sing just like Aretha, so respect me like I’m Caesar/I kick it like Adidas, blowin’ sticky like adhesive/Be cautious, cause what I be on will leave you with amnesia.” Plus you can’t help but chuckle when he says: “Hocus pocus is my stylo.” I’m still up in the air on this song because I want to hate it so bad, but I can’t.

Fame
Produced by JackPot & Jim Jonsin
This song right here shows why Jim Jonsin is becoming one of the premier producers in the game right now. This song is BANGING!! However, when B.o.B started up his verse, I could swear Jay-Z was looking for his flow (Listen to “Hate” off BP3, then listen to this). B.o.B’s hook is catchy and makes the song much better. It’s a much better take on a concept you’ve heard far too many times before.

Lovelier Than You
Produced by Bobby Ray
This one sounds like a cut off 808’s with the Taiko drum sound in the back. B.o.B’s flow on this irritates me a little bit, but I’m not gonna front like I don’t like this one, because the acoustics really help to bring home the fact that Bobby Ray’s a skilled singer. He comes with a pretty good verse at the end of it all though. At the same time, when I look back at the whole album, this song just doesn’t stick out to me; it’s just OK.

5th Dimension
Featuring Ricco Barrino; Produced by Lil’ C
B.o.B really proved himself lyrically on this one: “Girl, I’m eons and eons, beyond, these peons/Another human like me? There will never be one./The planet that I’m from I can’t even speak on/The stars is what I sleep on, the moon I put my feet on/The way my aura glows, you swear I’m made of neon/Cooler than a freon…” Nice! Things got wierd when he tried to rhyme “Jordan” with “Orbit” and “Ornament”. Maybe it’s because I’m a youngin’, but I couldn’t really get into the hook, it’s way too old school for me. Overall, it sounds almost like filler to me.

Airplanes, Part II
Featuring Eminem; Produced by Alex Da Kid & DJ Frank E
This was widely known as the “Eminem version”. It’s also longer and much more emotional than the original. I give B.o.B props for writing new lyrics to the song, which he probably had to do even stand on Eminem’s level for this track, because anyone who’s heard Em’s latest shit knows he’s on another level lyrically right now. So most people will probably fast forward to Em’s part anyway, so let’s get this out of the way: he kills it. No accent, raw emotion that builds as the track goes on, and of course the lyrics: “And he never dreamed he could rip stadium/He’s just lazy as shit, fuck a talent show in the gymnasium, bitch/You won’t amount to shit, quit day dreaming kid./You need to get your cranium checked/Your thinkin like an alien/It just ain’t realistic” Wow.

Bottom Line:
At the end of the day, I really enjoyed this album. One thing I want to note is that while B.o.B is talented, sometimes I think that his comparisons and similarities to Andre 3000 help him a lot. Many of the songs on here sound like songs off The Love Below, or things that 3 Stacks would sing. Still, I’d be lying if I didn’t acknowledge that this will end up being one of the best albums of the year. B.o.B is a breath of fresh air in the game right now. He brings versatility, emotion, and great songwriting to Hip-Hop with this great debut. If B.o.B is any indication of the new generation of the rap game, maybe there’s hope after all. T.I. better watch out; there’s a new star over at Grand Hustle.

nappyPicks: The whole album is worth the money, there’s something for everyone.