The Starting 5: 2009 All Rookie Team Project 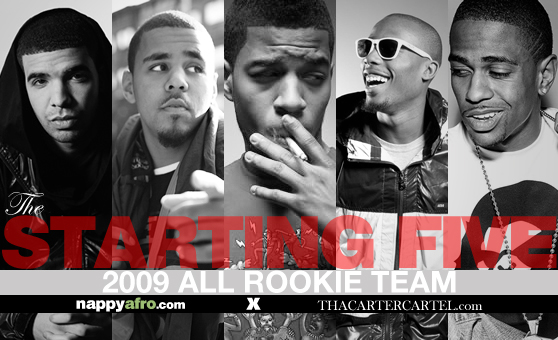 A little background info on this one:

Our homies over at Tha Carter Cartel (Specifically longh0rn) are always putting together these massive projects of certain artists. It could be anybody from Ryan Leslie to Kanye West but these projects contains massive amounts of music sometime tipping over the 500mb scale. I’ve always wanted to help out with getting shine for what they were doing so when I saw 2009 All Rookie Team Project (Seeing as Saule did a whole team theme recently with Hip-Hop groups), I was like; “Yea, this is the one”. Plus with the upcoming NBA All Star Game it all makes sense. All the credit should be due to longh0rn for putting together all this music; the only thing I did was slap on the banner you see above. I’ll let him explain in his own words as we look at the team and pass out the download links.

Here is the Guards of the All Rookie Team 2009. Drake is at the point position running the show for the Rooks. Big Sean is the shooting guard, dropping 3’s (punch lines). The material in these are just all of the mixtapes, random songs, and features these two Rooks did, over 700 mb together.

Jermaine Cole is the small forward on the 2009 All Rookie Team. Dude came out of my state and made it in the game. Not too long ago he was signed as Roc Nation’s first artist. He is now going on tour with Jay-Z, N.E.R.D & Lupe Fiasco. I can say everyday I play The Warm Up, it is easy one of the best mixtapes of last year but people sleep on it. Here’s my collection of his work, I’m sure I have all of it because not alot of material has been released.

Bobby Ray aka B.o.B. is your starting power forward on the 2009 All Rookie Team. Bobby Ray has been compared to Andre 3000 with his rapping style and can actually play the guitar unlike Lil’ Wayne. Like all of these rookies, he is one of my favorite artists right now. Here’s the collection of tracks I have of him, which is a lot!

After dropping his debut album last year, his buzz will only continue. Also has another album dropping sometime this year, so we have that to look forward too. This includes the official mixtapes, and a bunch of random freestyles, remixes, and features CuDi has done. Before I lost all my music, I didn’t have most of these tracks and I’m a big Cudder follower.