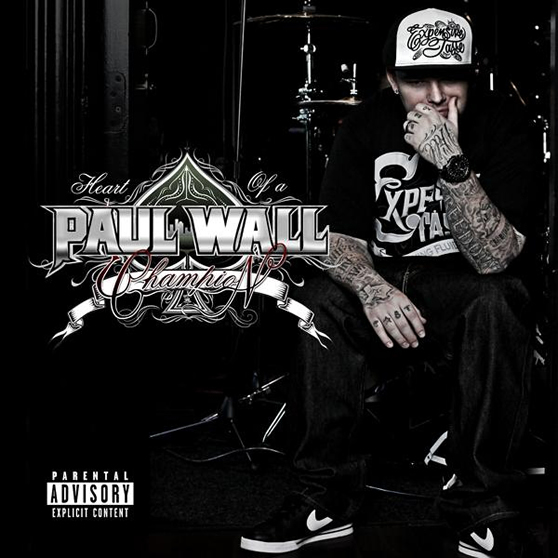 Everybody likes Paul Wall. Okay, he may not be Hip-Hop’s favorite white boy, but that’s only because most forget that he is white. During Houston’s rap explosion during in the mid 2000’s, Paul Wall was one of the main figures on the forefront (I’m not even mentioning him re-popularizing grills; no George Foreman). This led to his major label debut, The People’s Champ, landing atop the Billboard charts as well and earning a Platinum plaque. His two following albums didn’t gain as much success but he returns with his fourth effort, Heart Of A Champion. Will this album once again have The People’s Champ hoisting up a title for H-Town? Let’s find out…

1. Take Notes
Produced by Travis Barker
On the first track we get Paul rapping about his usual topics: getting money, spending money, and shaking off hatters.  It’s nothing lyrical but it’s what you expect. Even though the beat isn’t spectacular, you can tell Travis Barker has improved with his production ability. O guess this is the intro because it has one long verse and no hook.

2. Showin’ Skillz
Featuring Lil’ Keke
This is your standard slow bass heavy Houston track as Paul grabs hometown mainstay Lil’ Keke for the feature. It comes with the screwed up hook but the track as a whole seems boring. I wll gives points to Paul for mentioning Matt Kemp, Pokemon, ESPN’s Web Gems, and The Backyardigans all in the same verse though.

3. I’m On Patron
Produced by Beanz N Kornbread
This was the first single off this album and I’m sure it didn’t take off like Paul would have liked. But in the right system with the right speakers, this shit knocks. When it gets to the chorus, you then know it’s probably is the perfect backdrop when your in the club and you had way too many. Now that I listen to it a fews times, it almost like Paul Wall’s version of “In The Club”.

4. Round Here
Featuring Chamillionaire; Produced by Beanz N Kornbread
Since Paul recently reunited with former friend turned foe Chamillionaire, you know a collaboration was due on this album. Cham sings on the hook and get a verse and Paul gets two over a organ led beat. It’s average but I’m happy the two patched up things.  Did Paul just say he’s “a family guy like Peter Griffith”? Okay.

5. I’m’ma Get It
Featuring Kid Sister & Bun B; Produced by Travis Barker
I heard that this is Paul Wall’s favorite track off the album. Well, Paul turns his usual verse (“You hop out of Buick everybody looking strange/But pull up in a Range/and everybody know your name”), Bun B of course has the best verse (“I’m blowin with my dogs/And blowin’ with my cousins/But the first one is for Pimp/Oh you thought that it wasn’t?”), but Kid Sister’s verse is suspect as it doesn’t really hold up to the previous two (She raps last). The beat is anchored by a screwed sample (“Im’ma Get It/Im’ma/Im’ma”) with hard hitting drums. It works.

6. Stay Iced Up
Featuring C. Stone & Johnny Dang
All you really need to know about this track is that Johnny Dang raps on third verse. The songs is basically a celebration of wearing jewelry like TV Johnny (Wall’s jewelry business partner and the Vietnamese guy with the insane diamond grill). But yes, he does rap and it’s hilarious.

7. Pocket Fulla Presidents
Featuring Andre Nickatina & Mitchy Slick; Produced by Beanz N Kornbread
The production here reminds me of NWA’s “Dopeman”. That’s not nessacarily a bad thing but it’s does grow boring after 30 seconds (The hook especially). I’m not really familar with Andre Nickatina or Mitchy Slick but neither really stand out here either.

8. Ain’t A Thang
Featuring Jim Jones: Produced by Travis Barker
On paper it makes sense for Paul Wall and Jim Jones to do a song together but the actually song comes off uninspired. Especially with lines like “I’m in love with dead men/No Bruno bro”. Yea. I do think better rappers could have done the beat justice.

9. My City
Featuring Dallas Blocker & Yo Gotti; Produced by Beanz N Kornbread
Beanz N Kornbread give up a beat that could pass as vintage Lil’ Jon; not the best thing in 2010. As the title says, this song deals with reppin’ your city but it doesn’t cause me to throw my set up. The singing here is pretty bad too.

10. Smoke Everyday
Featuring Z-Ro & Devin The Dude; Produced by Beanz N Kornbread
If you’re a rapper and have a song about weed, I think it’s law that you have to feature Devin The Dude. The track actually would fit nicely on an album by Devin as it has a soulful feel and is well produced. All three rappers trade weeds tales to good results (“It seems like all I do is smoke and get paid.”). Hell, this make me want to roll up one right now… and I don’t smoke.

11. Live It
Featuring Jay Electronica, Raekwon, & Yelawolf; Produced by Travis Barker
This is the song that most wanted to hear when seeing the tracklist. Initially I was undecided about it but after a few more listens, it really is the standout track off the album. The Chef may have had the best verse but Travis shows more of producing talent. Go here to see my post about this track.

12. Not My Friend
Featuring Expensive Taste & Slim Thug; Produced by Travis Barker
This is actually a song by Paul’s group Expensive Taste comprising of him, Travis Barker, & Skinhead Rob. At this point, the only thing that means on this album is that it features Skinhead Rob. The songs deals with real friends (Of course) but doesn’t add anything to take subject. I’m a Slim Thug fan so check for his verse on the end.

13. Still On
Produced by Travis Barker
This track is ripe for radio airplay complete with the unnamed T-Pain impersonator on the hook and the beat is remincent of a JR Rotem or a pop minded Just Blaze (See Maino’s “All The Above”). Paul explains how he is… still; “While tem other boys sleeping/I’m on the grind creepn'”. It is catchy so you may hear this as a future single.

14. Heart Of A Hustler
Featuring Expensive Taste; Produced by Travis Barker
This is another Expensive Taste track and also the title track of the album. It has a more rock edge this time but the main problem I have with the group is that both rappers aren’t very talented. It’s not a bad song but not a good note to end on

Bottom Line:
Even though Travis Barker & Benz N Kornbread produced most of Heart Of A Champion, this album is exacty what you expected. To his fans this may be good but and that may be the problem for new listeners. Seeing that Paul’s simplistic flow doesn’t have much range a 14 track span, good beats and great features are a must. While there are moments where those things occur, it’s not enough to make a big difference or make the album above average.  Paul Wall is still a likable guy, but in today’s game you need more than that.