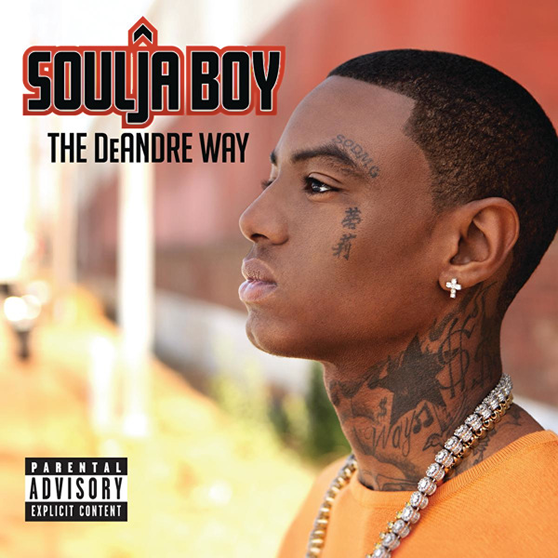 Soulja Boy who has been charged by many with the “Death of Hip-Hop”, releases his fourth album titled The DeAndre Way, says this is his biggest album of his career. Rap purists and many Hip-Hop fans don’t like Soulja Boy or his music for some reason. I don’t hate his music; I choose not to listen because his music isn’t for me. I do however find myself liking a song or two by the young mogul from the Peach State. Everyone knows how he got on, so let’s get into the album.

First Day of School
Produced by R3$ource
Soulja starts off with a song that will definitely have the youngins jamming this one in the morning while they get dressed for school. I can picture a young version of me rapping this while I’m looking in the mirror at my fresh new fit. Hate all you want, this song is ALRIGHT!

Touchdown
Produced by RICO Beats
One thing that helps SBeezy is his beats. The beat goes hard on this one and makes you overlook the simple lyrics. I notice that Soulja is talking about selling drugs on this song…the man is growing up. He even admitted to rapping like Gucci on this song. SWAG!

Hey Cutie
Featuring Trey Songz; Produced by Young Yonny & Troy Taylor
Soulja did this one for all the Soulja Girls out there. I can’t get mad at him for this; he is a (PAUSE) sex symbol for the youngsters. Why not throw the 2010 version of R. Kelly on the hook for even more love from the ladies.

Speakers Going Hammer
Produced by Boi-1da
The current single that got all the kids on facebook hitting the “like” button because the beat goes so HARD! I can’t even lie and say I don’t like this song. The production is what makes the song go HAMMER! I guess he will introduce some new words in the vocab for the kiddies. FIRE!

Pretty Boy Swag
Produced by G5 Kids
If you say that you didn’t jam this song YOU ARE A LIAR! This is another one of them songs that you sing when you jump fresh and you are on your way out the door. The production made this song a BANGER!

30 Thousand 100 Million
Featuring Lil’ B & A-Rab; Produced by Soulja Boy
THANK YOU BASED GOD! Soulja and his lablemate (?) Lil’ B jump on track together, and Soulja gets BASED and gets on Lil’ B’s swag and drops a verse. I have to say that I do enjoy Lil’ B’s music, but this beat doesn’t go as hard as all the other ones. Maybe Lil’ B should have made the beat and the song would have been better.

Mean Mug
Featuring 50 Cent; Produced by Drumma Boy
This one right here is that FLAME! How can you not like this song? The hook will have the thugs in the club going NUTS! The beat on the song is FIRE, and the back and forth between Soulja and 50 actually works on this song.

Blowing Me Kisses
Featuring Bei Maejor; Produced by Bei Maejor
This one reminds me of the “Kiss Me Thru the Phone” matter of fact this might be a continuation of that song. Once again, this is one for the ladies and I’m really not into this one so I have to pass on this one.

Fly
Produced by RICO Beats
Soulja gets on his Kanye shit on this song. He shows some of his artistic growth on this track. This is a different sound from Soulja. I have to say that he kind of went IN on this one. I know I will get killed for this one, but I like this song.

Grammy
Featuring Ester Dean; Produced by Polow da Don
Once again Soulja switches it up and gives his fans something they’re not used to. Anybody saying that SBeezy isn’t about change is mistaken. He did something different and it worked again. I have to say that I am impressed that he took this risk and made it work.

Bottom Line:
Soulja proved that less is more. He gave you 10 tracks of music, avoided all the filler, and in the end it proved to work for him. I know a lot of people won’t give this album a chance just because who he is, but that is to be expected. Soulja did show growth on this album, explored different sounds, and he stepped his game up. People act like he was going to keep up “supermanning that hoe” and screaming “YAHHH!” Nope, SBeezy changed it up and put out a respectable album.