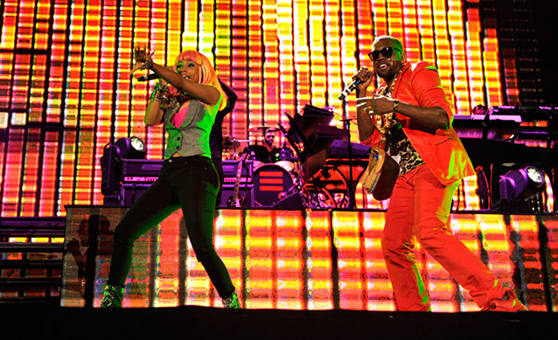 The other big album release this week belongs Nicki Minaj with her debut Pink Friday. Yea, she didn’t overtake Kanye West for the #1 spot but I think that was expected. Actually, she wasn’t really that far behind My Beautiful Dark Twisted Fantasy in terms of sales. All in all, this is win for Nicki, Young Money, (and hopefully) female MC’s everywhere. [Check out Nicki Minaj’s Pink Friday review here]

Despite Ne-Yo‘s album leaked a while ago, Libra Scale still pushes over a 100k and lands in the Top 10.

Jay-Z‘s greatest hits compilation, The Hits Collection, Volume One, does a quiet 27,000 in sales last week. This is not bad considering that it’s just a companion piece to his Decoded book (Which right now is sitting at #3 on the New York Times Bestseller list). He still could have thrown a new or unreleased track on there.

Yelawolf‘s debut album Trunk Muzik 0-60 kinda got lost in the shuffle among bigger releases last week. 5,000 copies isn’t bad for a newcomer but I’m sure many felt he deserved better. Now what? [Check out Yelawolf’s Trunk Muzik 0-60 review here]

Update: Forgot to add sales for albums by Curren$y and Big L. Both are now added below.