Why You Should Listen To: Nas [MixEP] 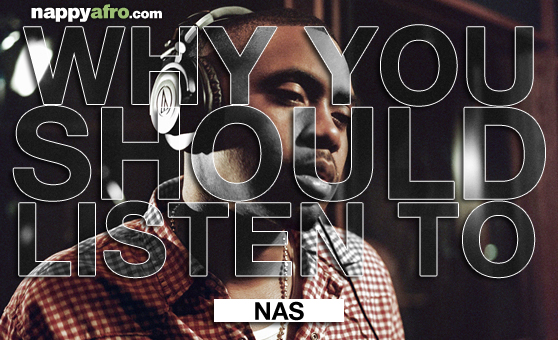 So what started with some members catching feelings and me somehow getting involved in a challenge (Shots fired to the nay say’ers that didn’t think I could do it), ends with a project that I actually enjoyed doing. As the Nas stan around the ‘Fro, it should come to no surprise that I picked Nas as my artist to do an MixEP (although I did consider J. Cole, but the lack of “No DJ’s” for The Come Up mixtape halted that idea). I figured we might as well make it on an artist that was part of the original challenge and why not pick one of Jerm’s least favorite rapper.

Now, this project was by no means hard, considering that Nas has a great catalog of tracks that many would call classic, deep and street. The only minor challenge was to avoid the spontaneous and easy way out by picking all Illmatic, bringing a balance of musical styles (So we don’t end up with all deep tracks or all bangers), and picking songs that would even keep Jerm’s interest. After all this is an EP to introduce the listeners to a wide variety of Nas tracks. I tried to follow a rule that I wouldn’t use the more known tracks and singles that most of us know just to make it a little more challenging (i.e. “N.Y. State of Mind”, “If I Ruled The World”, “Ether”, & “Made You Look”, to name a few).

Bonus: I’m going to go the extra mile, I included 4 more cuts as a bonus, some being personal favorites and some being essential tracks. If you guys catch feelings and don’t like it, ya’ll can eat a dick!