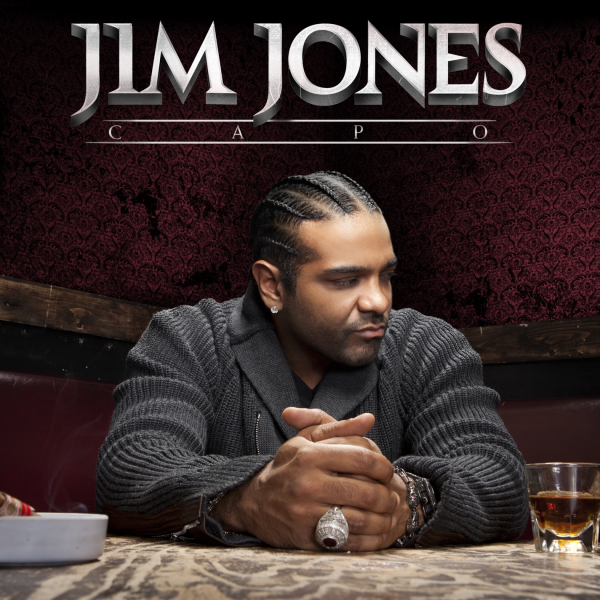 From Jim Jones’ beginnings in rap music playing the background as Cam’ron’s hypeman, I don’t think many would have guessed he’d turn out as a viable rapper in his own right even releasing the big hit “We Fly High”. Fast forward and now he releases his appropriately title 5th album Capo. This album comes two years after Jim Jones’ major label debut Pray IV Reign; which critically was met with praise but didn’t garner the commercial success expected. Now back at Koch E-1, lets see how the DipSet Capo fairs with this newest release.

1. Intro
Featuring Sen City & Chink Santana; Produced by Chink Santana
At the start, Jim Jones continues his campaign for the fast street life. He raps over a stripped down string heavy beat for about a 50 second before the bass comes in. Jimmy rhyming has changed since the last album (Rap a line, heavy ad-lib, repeat), but the beat serves well as the intro for this album. Sen City & Chink Santana only get to share about a minute to rap on the track towards the end. Capo officially begins.

2. Deep Blue
Featuring Chink Santana; Produced by Lamont “LOGiC” Coleman
This beat sounds pixelated at times; like it would be the soundtrack to a Super Nintendo game. Here Jones gives us a glimpse in his hustling life (“I’m not saying I was Sosa with it/I was so so with it”) and the struggle of it. I could have done without that Chink Santana hook. Either way, the song comes off as boring but Jim Jones tries his best to keep the listener interested.

3. Carton Of Milk
Featuring Game & Sen City; Produced by Chink Santana
As soon as the track comes on I reminded of another Jim Jones song “Emotionless” as both songs use a lot of the same elements (They also share the same producer). Like most of the times Jones basically yells his verse, but Game’s verse easily outshines the other two featured on this song:

Other than that, mostly what this song did was make me wanna go back and listen to “Emotionless”.

4. The Paper
Featuring Chink Santana; Produced by Chink Santana
Capo is back on his South shit with this one; so much you’d think expect to hear DJ Khaled on the intro. But honestly, when you get to the generic hook, you understand that even a “We the best!” ad-lib is too good for this track (Well, then again…). For those keeping score, yes Chink Santana has been involved with the first 4 tracks on this album.

5. Heart Attack
Featuring Sen City; Produced by Triple-A
Even though Sen City has been featured many times on songs by Jim Jones, I have basically no idea who this guy it. But I do know that he shouldn’t be singing as much as he did on this song. Sappy. SKIP!

6. Everybody Jones
Featuring Aaron Lacrate; Produced by Aaron LaCrate & Debonair Samir
This was the first single for Capo and if I’m not mistaken, didn’t make much a impact. With the heavy bass simplistic production, it’s definitely aimed at the clubs. It can gets kinda annoying with the “Everybody Jones” sample replayed repeatedly. I’ll pass on this one but I do like the Tara Reid sounding white girl on the track that reminds me of the intro to “Baby Got Back”. And what the hell does “Everybody Jones” mean anyway?

7. Drops Is Out
Featuring Raekwon, Mel Matrix, & Sen City; Produced by AraabMUZIK
It seems that maybe Raekwon did a verse for a verse deal and returns the favor to Jim Jones for being on Shaolin Vs. Wu-Tang. And while The Chef appearance here is welcomed (The same goes for AraabMUZIK’s production), the song really doesn’t really do much to stand out. The beat isn’t bad but the hook sounds like it was already used for this album. All this equals to an average outing on “Drops Is Out”.

8. Let Me Fly
Featuring Rell; Produced by MarvinO BeatS & Shawn Giovanni
Jim raps about spending the night with a girl he just met at the club and having to rush off to catch the flight the next morning and the girl wanting him to stay. The track here is short but it’s one of the better songs on the album with Rell’s guest spot really adding to the song. Mark this one as a success.

9. Getting To The Money
Featuring Cam’ron & Lady H; Produced by Dunlap
There so many reason many I should dislike this song but surprisingly, it ‘s by far my favorite on the whole album. Not only do we see Killa Cam & Jim Jones once again joining forces, but the the beat hear is the real highlight of the track. While it could be filed as another beat that sounds like it could be produced by Lex Luger, it’s still well done (Check out the intro). Another reason this may work is because Jim Jones has never really been scared of a heavy Down South inspired beat. Of course we get a Cam’ron funny quotable:

Not Ronnie Romance, no chance/Don’t hold hands, no ma’am, oh damn/Be at your mom’s crib/Slow dance, no pants

10. Take A Bow
Featuring Lloyd Banks, Prodigy, & Sen City; Produced by D.J of The Innovatorz
I remember Jones talking about getting Prodigy on the album (Which is kinda fast considering he just got out of prison) but it’s a reason this track isn’t championed as P’s first album appearance in three years. On paper seeing Lloyd Bank, Prodigy, & Jimmy looks good; the actually song is underwhelming. First off, the production doesn’t make you feel like this is a notable collaboration. As for the actually collabo, all rappers don’t connect with each other sound as if it was a blend of verses from other songs.

11. Perfect Day
Featuring Chink Santana & LOGiC; Produced by Lamont “LOGiC” Coleman
When I first heard this song, I thought it was a joke. I remember Jim jumping on MGMT’s  “Electric Feel“, but this sounded like the soundtrack to a Special K commercial or something. Then when I saw the accompanying video complete with sign language and hospital visits, I knew it wasn’t a joke. Hey, I’m all for positivity and trying to reach the masses, but this seems really forced to me. And so poppy even will.i.am would get pissed off (It’s also taken as a rip off  “I Gotta Feeling”). SKIP!

12. Changing The Locks
Featuring Ashanti; Produced by Chris Liggio
Just like the previous R&B feature on this album, this track clocks in a around 2 minutes. What’s weird about this one is that it sounds like it was suppose to be Ashanti’s song with a Jones feature. Jim raps in the beginning for about 40 seconds and Ashanti takes the rest. This one seems out of place.

13. God Bless The Child
Featuring Wyclef Jean; Produced by Wyclef Jean
Yea, I really didn’t expect a Wyclef & Jim Jones collaboration either. The track doesn’t turn out too bad but using a screwed up loop of somebody saying “God Bless The Child” is kinda weird. Wyclef takes the first verse (Which wasn’t bad) and the hook while Jimmy takes the last two verses. It is what it is.

14. Itza
Produced by Drumma Boy
On the closer, we hear Jones over some surprising subdued production from Drumma Boy; the beat is well produced just not what I was expecting. Jim is more introspective here and ditches the ad-libs:

It’s a very thing line between trying to play both sides/The game have your heart racing feeling like a coke high/Some get broke down, other come home live/Some do the bean pies come home to bow ties

Nothing to write home about but it’s an okay ending to Capo.

Bottom Line:
The main problem with Capo is that it seems like Jim Jones can’t make up his mind on what he’s aiming for. But when he does make up his mind, he mostly does a poor job at the execution. You have blatant attempts a commercial appeal with tracks like “Perfect Day”, “Heart Attack”, & “Everybody Jones” that are just poorly done. Then you have street tracks like “Drops is Out” & “”Carton Of Milk” that feel like something is missing.

While some DipSet fans may enjoy this album, most should probably wait for The Diplomats reunion album (Interscope deal in tow). Jim Jones fans may just want to go back and listen to Hustler’s P.O.M.E. (Product of My Environment).