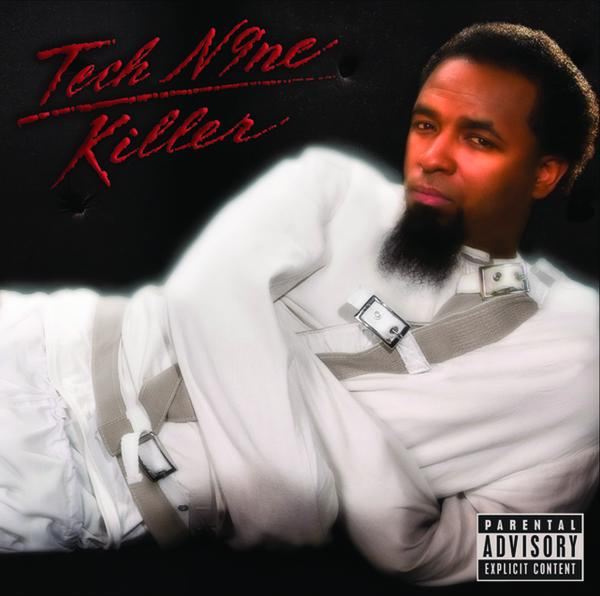 Kansas City’s own Tech N9ne may not have major radio airplay or frequent 106 & Park, but he has been on his grind for almost 20 years. After releasing 9 solo albums, Tech N9ne is ready to let loose his 10th (And maybe his final) album: Killer. After being independent for so long, this latest album will supposedly put him over the one million mark in sales during Tech’s whole career (Which is a great feat for an indie artist).

Personally I have never been a huge fan of Tech N9ne’s music; I mean, I heard a few songs, seen him around in magazines and on various soundtracks but never was compelled to dig deeper. Well, I guess this is a good time as any because the album I’m reviewing here, Killer, is a monster double album with 32 tracks. This could go really good or really bad but either way, the cover is crazy. Get ready for our longest review ever…

1. Dr. Frazier’s Office (Intro Skit)
The intro has Tech N9ne visiting the physiatrist’s office where he I hypnotized and asked to reveal his inner thoughts.

2. Like Yeah
Produced by YoungFyre
The first song showcases Tech N9ne’s usual high energy sound and fast/slow delivery. Over gunshots and heavy horns, Tech explains his success and history while going at his detractors. This is a good start into bringing listeners the world of Tech N9ne.

3. Wheaties
Featuring Shawnna; Produced by YoungFyre
I don’t know if it’s a female rapper drought, but it seems like Shawnna is getting some work lately. The subject of the song is nothing new; a girl versus boy duel about who brings it in the bedroom (So you better eat your Wheaties). The song is average but the hook is kinda weak.

4. Everybody Move
The first single off the album; obviously this song is most likely aimed at the clubs. The productions sounds dated and even though Tech has a able flow, he sometimes sounds silly; “I’m a naughty, naughty, naughty/Boy, boy, boy/When I’m in Aussie, Aussie, Aussie/Ow, ow, ow” (I know that’s his style, but dang).

5. Get The Fuck Outta Here
Featuring Paul Wall & The Popper
Over a slower and darker beat, Tech brings in Paul Wall and The Popper to get at the haters. All of the participants bring something different to the table; Tech bring his unorthodox flow, Popper brings some gangster, and Paul Wall brings…uh whatever it is that Paul Wall brings.

6. The Waitress
This track reminds me of a song Atmosphere did by the same name. It shows Tech has versatility and as Tech rhymes about his infatuation with a waitress he sees. Don’t get it twisted though, it’s doesn’t get deeper than that; it more about phat asses and big tittles than anything else. The beat is okay but it sounds generic.

7. Crybaby
Produced by Seven
Here Tech breaks down how Hip-Hop is not dead and all the detractors saying this is are “crybabies”. He actually takes a side of praising acts like Soulja Boy instead of downing them. The hook is crazy (“…them rappers sounding like waaahhh, waaaahhh, waaaaahhhhh!”)

8. Shit Is Real
Featuring Mr. Stinky; Produced by Matic Lee
This track has a Rock/Reggae feel and talks about how shit is so real sometimes that on weekends, you have to party just to stay sane (a maybe blow your whole paycheck). It’s a pretty straight forward but it gets the job down and I’m sure everyone can relate. Good track.

9. Blackboy
Featuring Brother J, Ice Cube, & Krizz Kaliko
When you have an X-Clan member and Ice Cube on the track as well and a song titled “Blackboy”, it’s a good chance they’re going to talk about the ills of being Black in America. If you know me you know I’m all for shit like this. The beat could have been better, but the subject matter is spot on; no matter how much money you got, you’re still Black. The best line of the song: “I don’t need Jena 6/For me to know America’s still on that bullshit”.

10. Pillow Talkin’
Featuring Scarface
And the O.G. rapper cameos continue. The way this song starts out, you will swear it’s still on the previous song. It deals with telling various women your dirt after sex. The best sounds like something Timbaland would have done in the past. This is one of my favorite off this album because Scarface straight rips it.

11. Paint A Dark Picture
Featuring Dirtball
Sometimes Tech N9ne gets a little dark; this is one of those songs. Complete with demonic voices and creeping beat; Tech and Dirtball spit faster on the track. It’s okay but not for me.

12. Hope For A Higher Power
This song basically talks about looking for a higher power in a sinful world. Over a dark beat, Tech paints a good picture; the hook is just awkward and silly.

13. Worst Case Scenario (Skit)
This is an intro for the next song.

14. Psycho Bitch II
Featuring Liquid Assassin
Can you figure out what this song is about? Tech N9ne returns to a subject previous covered and adds more to it. Over a ruckus beat, Tech and Liquid Assassin speaks about the tribulations of hooking up with the crazy girl (Haven’t we all been there?). Well produced and truthful song.

15. Poisonous
Featuring Liz Suwandi
I listened to this track a few times and I’m still tying to figure out if he doing a big metaphor or not. It has an Indian inspired song with a lady sing on the hook. It’s a okay song but it’s kinda short; around 2 ½ minutes. Somebody hit me up and tell me if I’m wrong or not.

16. Too Much
Featuring Kutt Calhoun
Here Tech big his label up and calls himself the king. The song has an anthem feel to it and it’s affine way to end the first disc. Can somebody please tell me if Kutt Calhoun the same one who used to be down with Cool Breeze.

Disc Two
Don’t think we went crazy and forgot to give this album a rating; click here for the breakdown of the second disc as well as the review for the entire album.