Never Leave It To The Judges 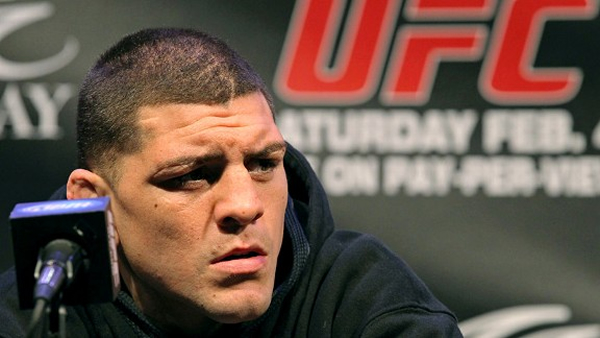 Despite being overshadowed by Super Bowl Sunday, this was a big weekend in the sport of MMA. The UFC held a championship competition of its own on Saturday for the welterweight interim title to decide who would fight the undisputed welterweight champion Georges St. Pierre after his recovery.

Just when I thought Nick Diaz’s career couldn’t get any more full of drama, he loses a controversial decision to Carlos Condit and makes claims to be retiring during an emotional response after the fight. Not for a minute did I believe his frustrated claim of retirement. He’s just a little mad.

Diaz fought Condit for a technical twenty-five minutes while the judges apparently took the night off. I say this not because of the fact that they chose Condit as the winner but because of the complete lack of consensus between fighters, viewers and the judges. The judges scored the fight almost completely opposite from what many viewers did. Many professional fighters from the UFC went to twitter to share their opinions on the fight, most of whom believed Nick to have won by decision.

A fight as close as this is a judge’s worst nightmare. The integrity of the judges from Saturday’s fight is in question not because of who they picked as the winner but because of how they scored the rounds. Many viewers and UFC fighters on Twitter and in polls claimed to have scored the fight 3 to 2 for Diaz with Diaz winning rounds 1, 2, and 5. After watching the fight several times, I’d easily give Diaz rounds 1 and 2. Round 3 was by far the closest round and I’d understand any argument for either fighter winning this one. Condit won the fourth. The fifth was even until Nick successfully locked Carlos in a body triangle after taking him down. I was shocked when I found out that none of the judges gave Diaz the first round and two of the judges had Nick winning only the third round.

Carlos’ coach, Greg Jackson, prepared him to use this ‘stick and move’ style for this fight. He talks about it in this post fight interview. What I ask is: How can his ‘stick and move’ style of fighting be considered successful when Nick landed more head and body shots than Carlos did? Condit landed more total strikes than his opponent, but overall statistics can be misleading. If you look a little more in depth at the numbers you will see that Nick landed 20 more shots to the upper body and 7 more shots to the head than Condit; all while Condit was moving away. Note that Nick was also more accurate above the waist. Throughout the fight Condit would move in and throw what Nick called “baby kicks” and quickly backpedaled. The majority of Condit’s strikes were to the legs which, judging by Nick’s overall reaction, caused minimal damage. This accounts for higher total strikes. Although leg kicks can be extremely damaging and advantageous if used well, some may also use them to win a points battle. Nowhere in the rules does it say that simply landing more total strikes wins you the fight. In fact, there have been several fights in just the last few months where the winner landed less strikes than the loser. The manner in which Condit used for this fight is sometimes referred to as ‘fighting not to lose’ as opposed to ‘fighting to win.’ 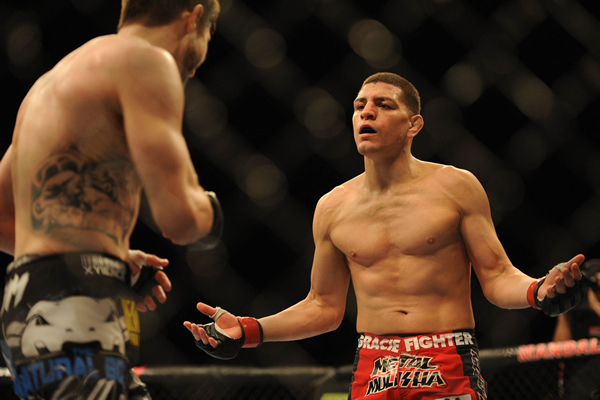 Another controversial debate on this fight is whether Nick’s style of pushing forward and landing strikes makes him the aggressor or gives him control of the fighting area which are both criteria for winning an MMA fight. According to the UFC, it does. On line H of section 14 in the UFC Rules and Regulations, it states “Effective aggressiveness means moving forward and landing a legal strike.” On line G it states “Fighting area control is judged by determining who is dictating the pace, location, and position of the bout.” Condit’s reactionary style of fighting is the opposite of both of these and he never put Diaz in a position where he was in danger of being finished. Nick never stopped moving forward, he out-struck his opponent above the waist, took the fight to the ground by force and secured a dominant position with a body triangle while making multiple submission attempts in the end of the fifth round. The only reason Condit moved at all in this fight was because Nick was walking right through him and his strikes.

With all things considered, I have to give this fight to Diaz. I scored it 48-47 with Nick winning rounds 1, 2, and 5. Apparently GSP won’t be back until around November so I suggest a rematch. There’s plenty of time and these guys are the only two welterweights that would give Georges competition anyway. So lets see it again.