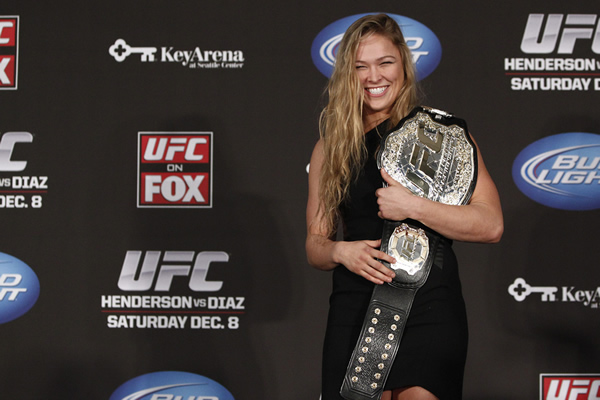 UFC President Dana White made it official last Thursday that the UFC will now be entering into the sport of Women’s MMA. He took the first step which was to crown the former Strikeforce women’s champion Ronda Rousey with her new UFC title.

After receiving her belt, Rousey was a little shy but after a few minutes in front of the cameras she opened up as usual. She’s been known to let loose in front of the cameras as exemplified with her little war of words with Kim Kardashian earlier this year. This time she called out Miesha Tate and Sara McMann, two female fighters that have recently been accused of ducking her.

White announced that her first title defense will be on February 23, 2013 against Liz Carmouche and that it will be the main event. He’s always been skeptical about women’s MMA simply because, at this point in time, there isn’t a very large pool of fighters to make a complete division. About a year ago White was asked if women will ever fight in the UFC. His response, “Never”. The explosion of fame that Ronda Rousey has brought to the sport seems to have changed his mind.

White has claimed that Rousey is now signed to an 8 fight contract and that the promotion will make their best attempt to build a division around their new champ. We’ll find out in February if women’s MMA is a viable sport.