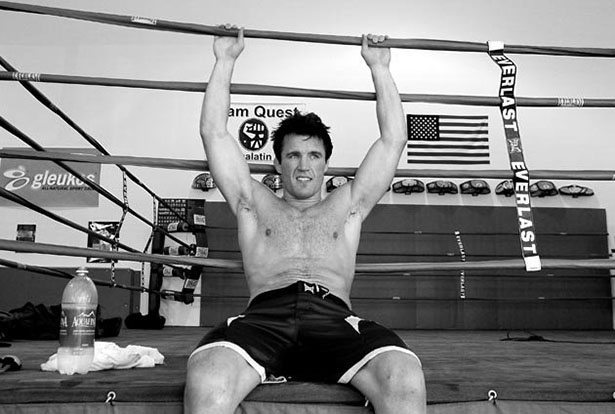 With Chael Sonnen‘s corny, predictable, obnoxious, and obviously fabricated approach to promoting his fights, it’s very easy to look past him as a legitimate opponent for the elite of the elite like Jon Jones, the young light heavyweight champion he’ll be fighting this Saturday at UFC 159. But looking past an opponent isn’t something Jones is likely to do. He’s a very intelligent fighter with very intelligent coaches who surely won’t allow him to do something so stupid.

So what are the things the young champ should look out for? How can Sonnen beat Jones on Saturday?

In fights involving the top three pound for pound ranked guys, many don’t even consider these questions since Anderson Silva, Georges St. Pierre, and Jon Jones usually run through everyone they face while making it look easy. But champs have been upset before.

Although Sonnen’s foray into the sport of mixed martial arts over the last three years has been a product of his creation, he got to this high level with legitimate talent and performance. He wasn’t so outspoken when he was climbing the ranks. He presumably knows he’s on the last stretch of his career and is simply exploiting the media coverage that comes with UFC title fights to make the most money as possible. Honestly, I can’t knock the guy for it. Careers in sports are short and most athletes don’t make the most of them. Chael Sonnen very well may be the best fighter/promoter of all time.

Sonnen’s strengths lie in greco roman wrestling and grappling since he trained with the US Olympic team and competed in NCAA Division 1 wrestling. Jones is also good at wrestling but he never made it at such a high level. Jones’ striking has been his most effective tool and his reach is a major part of that. I think it’s something Chael will look to avoid.

Something we haven’t seen a lot of in the past is Jones’ jiu-jitsu and grappling, presumably because he’s not very good at it. In fact, he admitted as much after Vitor Belfort came very close to snapping his arm. Sonnen isn’t much of a submission specialist but his ability to keep guys on the ground and beat them up is strong. We haven’t seen much of Jones on his back against the top level guys and Chael is the one who can put him there, and keep him there.

Keeping him against the fence is another thing we’ll surely see from Sonnen. Jones has shown good work when pressed against the cage but none of his opponents were at the level of Chael when it comes to greco roman wrestling. I expect Sonnen to be much more successful than any of Jones’ past opponents in doing damage against the cage.

On top of all this, Sonnen can hit. We haven’t seen Jones take many big shots except for a few from Rashad Evans. If Chael can land some good clean shots on the champ, I wouldn’t be surprised to see his performance fade.

Jones has some of the best game planners and coaches in the sport and pretty much everyone is expecting him to execute them well. But as Mike Tyson said, “Everybody has a plan until they get punched in the mouth.”