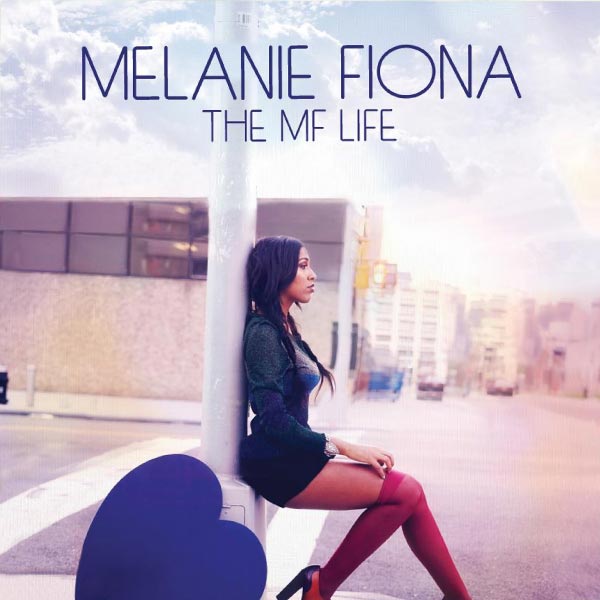 It’s widely known that Melanie is Canadian, a beautiful mix of Indian and African heritage, and can flat out blow. Did y’all know that she was in a group with Drake? How about that she delayed signing with a major label because she didn’t want them to change her into the over-sexed images that we see all too often? I think it’s entirely possible that her strong maturity that shines through her music, may be the reason she’s not a bigger star than she is. We tend to let talent slip by us if it’s not presented in the same cookie cutter manner that we’re used to. Thus artists like Ledisi, Melanie Fiona and others end up getting Grammy nods on albums that don’t tend to move units. Everyone sings the praises of Melanie’s first album The Bridge, but it has yet to go Gold. So what can we expect from someone that has respect by the masses but not the sales? If history is any indication, you’ll be coming to her before she’ll be changin’ to pick up sales, so let’s see if that’s true.

1. This Time
Featuring J.Cole; Produced by No I.D.
I’m glad to hear this song get more airplay commercially lately. No I.D. and J.Cole give it the Hip-Hop backing and Melanie provides the attitude. On a song that is about making the best of a second chance at love with someone and being determined to succeed, the combination of Hip-Hop and attitude couldn’t be any more at home. Not only is this a dope way to start the album, it’s a strong song that maybe could have been a lead single used to move units.

2. 4 AM
Produced by Rico Love, Earl Hood, & Eric Goudy II
Then again, this is the reason the previous song wasn’t a lead single. Rico Love is one of the names that you know if you’ve read more than one R&B liner note in the past 10 years. He’s penned or produced hits for Usher, Beyonce, Keri Hilson, Dirty Money, Kelly Rowland, Jamie Foxx, Fantasia, & Mary J. Blige just to name a few. Hearing him team up with Melanie is pretty much what you’d expect; magic. It was a top 10 R&B song on the charts and it’s been burning since dropping as the second single almost 5 months ago. Using strong lyrics and emotion, Melanie crafts what is one of her bigger songs to date.

3. Break Down These Walls
Produced by No I.D.
There is strength in the lyrics of this song. “My heart beats every beat for you/it hurts when you’re hurt/I’m through when you’re through”. Those relationships when you try to love someone and they seem to push you away as hard as you try to love, this is the anthem. Fiona’s resolve on this song is expressed quite flawlessly in this song. No I.D. provides a beat that marches along perfectly with this song. I hope this is made into a video, the imagery and epic storytelling that is created begs for treatment.

4. I Been That Girl
Produced by T-Minus
After I first heard this song, I was dead set on finding out who wrote it…then when I read it was Drake I thought “the jokes write themselves”. Once you get past that, this is a really insightful and heartfelt song. It is speaking on the various situations of being the mistreated afterthought of the relationship while continuing to do more than you can/should to make it work. As Fiona quips over some sappy strings and emotionally thick music, you may find yourself evaluating your own relationships.

5. Wrong Side Of A Love Song
Produced by Jack Splash
This is one of the best songs on the album. It’s huge, heartfelt, emotional, and naked. Just as the title suggests, she’s on the bad end of the relationship…the side of unappreciating and mistreating someone. It’s amazing to hear how much soul she manages to put into this song considering that she spends much more time being on the opposite end with her other songs. I think that this is one of those songs that will end up being a favorite by anyone that hears it and may be the defining moment of the album. Jack Splash’s production has this song build to a loud (Both musically and vocally) climax and drop off sharply and suddenly which leaves you entranced in the moment.

6. Running
Featuring Nas; Produced by Salaam Remi
Faced with the unfortunate task of trying to follow the previous song, Nas jumps on the neck-breaker produced by Salaam Remi. Melanie refuses to be intimidated by the two old friends and settles in and sings her heart out. “Running” is really solid song that would even be dope without the Nas verse. I’ve read reviews that say that this reminds them of Amy Winehouse music, but I think that’s a reach into the Salaam and Amy collaboration history. It could be just me though, you listen and tell me what you think.

7. Change The Record
Featuring B.o.B.; Produced by Los Da Mystro
This could be a really big song if MTV still had a video show. The pop sensibilities on this are off the chart. Srong rhythmic beat and keys, the simplistic but effective drums and rock themed harmonies really make this the best “crossover” song on the album. Not to be outdone, B.o.B. has the best rap feature on the album fitting the song perfectly. The concept on this one is explained in the hook.

She goes on to compare men to records talking about the skips and the repeat songs she hears from other men. I love the writing on this song, such a simple concept executed perfectly. 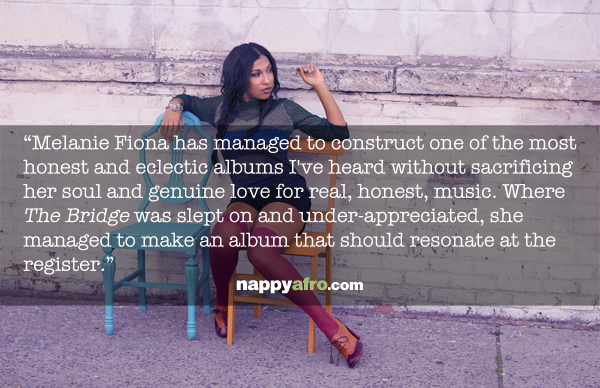 8. Gone And Never Coming Back
Produced by Jay Fenix & Andrea Martin
We get back to ballad with song 8. The song starts off with some simple keys being played up until about the 35 second mark when there is an explosion of music that grabs your attention and doesn’t let you relax until almost a minute later. The exciting change in music is matched by the emotion in Fiona’s strong, smokey, sincere notes. This is the type of song you’d hear in one of those plays when the singer is about to change her life in some form or another. It’s really monumental and big in a musical sense.

9. Bones
Produced by Jack Splash
Now, if there is a song that may have you think of Amy Winehouse, this would be it. That throwback vibe, harmony, horns and finger snappin’ soul help make this another standout song on the album. Lyrically, I don’t know that there is a better song on the regular version of the album.*

10. Watch Me Work
Produced by Infinity, Antario “Tario” Holmes
We get a very funky rocked out track for this one that inspires thoughts of Tina Turner. It’s not a bad song and the beat will have you nodding along, but it still doesn’t manage to grab me like the rest of the album has to this point. It’s definitely one that I will have to keep playing to fully appreciate, but it’s not on the same level as the previous songs on the album.

11. Can’t Say I Never Loved You
Produced by Espionage
“Can’t Say I Never Loved You” has it’s roots in a island vibe complete with what sounds like ukeleles. Much like the previous song, it’s not bad but it just doesn’t grab me like the other songs. There’s also something odd about how this song feels so happy and lyrics are so dismissive. That may be the message, as she says in the song:

Promises, were all I got
It might mean nothing to you,
But to me it meant a lot
You said you loved me but you left
Lord knows I really did my best
I relied on you to do the rest
Can’t say I never loved you

12. L.O.V.E.
Featuring John Legend; Produced by No I.D.
It’s almost comical how much any John Legend feature sounds like a John Legend song, and this is no different. This is just some good music, both in the way it feels and the way it’s produced. On an album that is full of songs about heartbreak this one feels like a breath of fresh air…not that the other songs are bad at all but it does help to lighten the mood. If you enjoyed Wake Up with John Legend & The Roots, you’ll enjoy this instant vintage song.

13. 6 AM (Bonus Track)
Featuring T-Pain; Produced by T-Pain
I won’t even pretend to be fair with this song, I think T-Pain makes good music. Having him feature and write this song is just gold for me. Melanie doesn’t use the vocoder on her lead vocals but does a bit on her background and it really helps layer this song well. These two should really consider doing an album together. This is yet another song that I think would be a pretty big hit if released as a single.

Sidenote: The Deluxe Version of The MF Life features “Rock, Paper, Scissors” which is the best song on the album. If you’re debating which version to get, this song is worth the extra money, go deluxe.

Bottom Line:
Nowadays, music is largely made on a machine or two instead of the actual instruments. The scream of the strings as fingers slide down the neck and the faint release of the rest of the force from a live drum hit are sounds that seem to be reserved for Jazz albums or Roots albums, as it pertains to urban music. Melanie Fiona has managed to construct one of the most honest and eclectic albums I’ve heard without sacrificing her soul and genuine love for real, honest, music. Where The Bridge was slept on and under-appreciated, she managed to make an album that should resonate at the register. Carefully picking her features as well as the production and lyrics of this album make it worth the wait and that wait is understood when you hear the final product. It’s early and depending on how a few albums are categorized, I fully expect this to be a top 5 album at the end of the year. Melanie managed to set the bar really high for artists this year, let The MF Life begin.