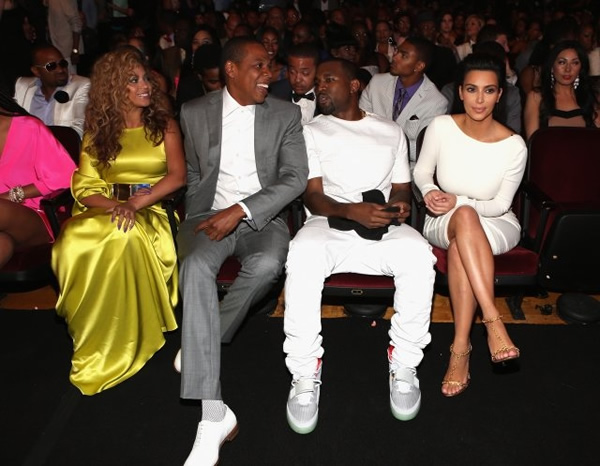 So this year’s BET Awards are over and although I couldn’t watch most of the show, I do know that Jay-Z & Kanye West both brought the wifeys  out, Samuel L. Jackson was hosting, & Nicki Minaj‘s ass was trying to do what Free’s did last year. Besides, Saule Wright & King Jerm shared there thoughts via Twitter (Go here & here to catchup. #AllPositiveTweets). So since I’m gonna have to go back and look at the performances anyway, why not post them here with my thoughts?

As promised, G.O.O.D. Music (Big Sean, Pusha T, 2 Chainz, & Kanye West) opened up with “Mercy”. Kanye also performed some of “Cold”. and then (supposedly) did an acappella verse from the upcoming “New God Flow”. I’m also pretty sure sneakerheads were going crazy over the white Yeezy II’s.

Remember in the intro when I said something about Nicki Minaj’s ass? This is what I was referring to (Is it fake? I don’t even car anymore). No “Starships” either; she performed “Champion” & “Beez In The Trap” with 2 Chainz.

G.O.O.D Music wasn’t the only crew reppin’ on that BET stage. Maybach Music Group (Rick Ross, Meek Mill, & Wale) did a melody of their current hits but the the performance wasn’t anything special. Shout out to French Montana & Gunplay for just walking around on stage with no microphones.

By now you know that it’s federal law that Chris Brown perform at every BET Awards so not matter what (He also has to do a flip of some sort during the performance too). Here’s his 2012’s performance.

Other stuff that happened at the BET Awards that I didn’t feel like posting or writing about: Who idea was it to let Cash Out & Tyga close the show? Usher performed “Climax”, D’Angelo continued his comeback tour, Slaughterhouse performed at the pre-show and so did A$AP Rocky & Swizz Beatz. I’m pretty sure Soulja Boy was crying during the Whitney Houston tribute. Oh, and Kanye got Taylor Swift’d by Jay-Z (Don’t ask me why Jay was dress like Pee Wee Herman). Good night.