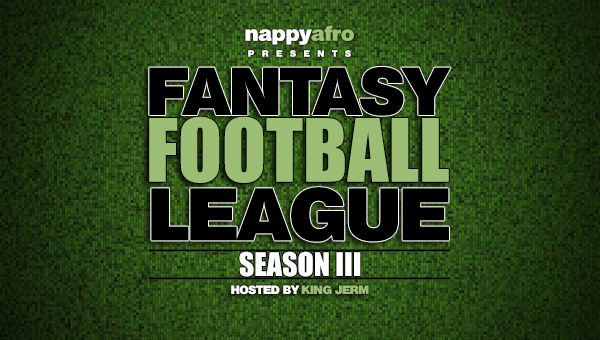 WE’RE BACK!!! Yes sir, your FAVORITE and CUT THROAT fantasy football league is back for its THIRD season! We have the usual band of characters here and we have some new ones on the scene. Let’s see if they are GULLY enough to stay the course. This year we cut down to 16 teams and added a defensive player to spice things up, hopefully that would get more  points on the board than we had last season. I don’t know if you guys remembered who won the trophy last year, but let me remind you ONE MORE TIME….ME! Now enough of the rambling…I have a rundown to do!

Week One Results *Winner in BOLD*

Saule Wright starts the season off with a BIG victory over the reigning champ. Must have been the ring ceremony and the banner hanging that caught King Jerm off guard. Don’t expect that to happen again.

FYF picked up where he left off last season by beating Jenk pretty easy in this one. Jenk didn’t get that big game from Cam that he was expecting. It resulted in Cam getting traded for Arian Foster.

CornellDaGr8 got his first victory in the FFFL with his win over Cyclone in this week one matchup. I don’t know which one made him happier, the FFFL victory, or the way RG3 played in his first NFL game. Look for Cyclone to rebound after his promise to bring home the trophy this season.

Tisha squeaked out a victory over Big O and the Hit Squad this week in the battle of the Redskin fans (which we have too many in this league). Big O’s #1 pick showed out for him, while Tisha’s #1 came up big for her. I hate to say it but, DON’T SLEEP ON TYSHONROCKZ!

Arkitekt picked up a victory and continued his winning ways by picking up a victory over Dr. Mom. Who knew C.J. Spiller would have had the game of his life when Fred Jackson went down. She will compete this year…WATCH OUT! (c) Lee Corso

High score of the week goes out to Faraj and his squad. Spread Jermz didn’t even stand a chance. From one champ to another…that’s how you whoop some ass! PAWS.

LPH tried to start off the season on the good foot, but Clay Davis had other plans. I hope LPH doesn’t have the kind of season he had last year. I’m lying. Good win on Clay’s part.

Another one of the newcomers in the league WAXED P from the D in their first game in the league. P was talking PLENTY of shit on draft night, but I guess this ass whooping shut him up (for now.)