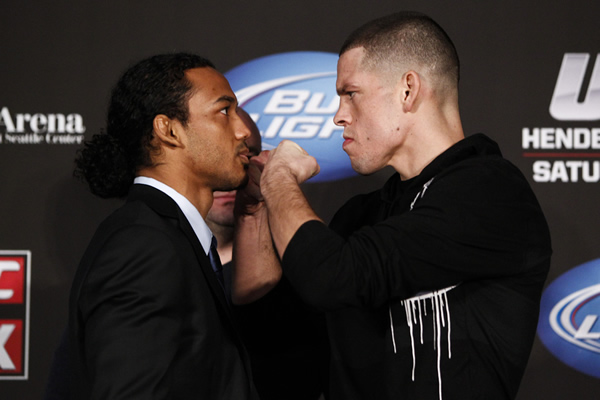 If you’ve never seen a UFC event, this weekend’s is the one to check out, not only because it’s free but also because it’s bound to be the most exciting card ever broadcasted on network television. This event is without question pay-per-view material but the UFC is providing us with an early Christmas gift.

The legendary BJ Penn makes his return against possibly the next prodigy, Rory McDonald. After that, the next light-heavyweight contender will be decided in a match between the young Alexander Gustafsson and the veteran Mauricio Rua.

The main event between the lightweight champion Benson Henderson and contender Nate Diaz is sure to be an electrifying match in any style of the fighters’ choosing. Diaz, one of the best boxers in the sport, is also one of the best jiu-jitsu practitioners which makes him dangerous on the ground and on his feet. His fearless style will prove to be interesting against the powerful champion.

Henderson, who just beat Frankie Edgar twice in a row, is similarly skilled in boxing but also has a wrestling background. His wrestling skills may be useful but because of the Diaz brothers’ skills on their backs, Nate may welcome being taken down. On multiple occasions they’ve enticed their opponents to take them down trusting that their superior submission skills will allow them to easily submit an overconfident wrestler. For these reasons, it’s very difficult to decide where to take the fight with one of the fearless brothers.

I’d say the best way to smother the peppering attack of Diaz would be with Greco-Roman wrestling, pinning him up to the cage while standing and keeping the distance close. This disallows him to maintain the distance he needs to land the hundreds of shots that he usually does. Strikers have attempted to stand and bang with Nate only to find out that he simply eats your punches and continues forward. His high accuracy and strike volume will batter you into submission.

The odds on this match are pretty close. They give the champion the slight advantage which is expected. I’d have my money on Diaz for the upset.