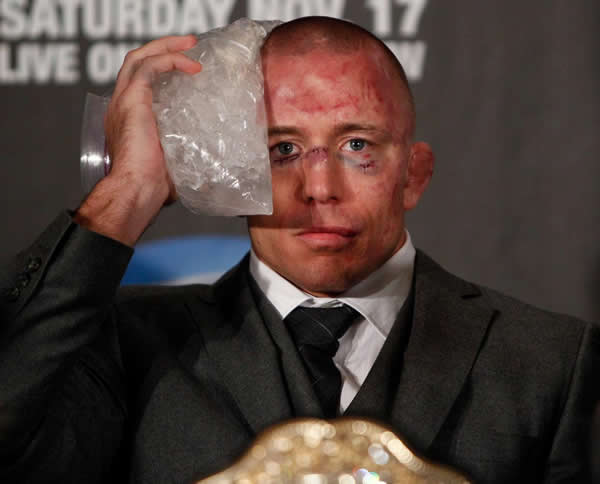 For what could have been another boring Georges St-Pierre fight, the Champion honored his vow and took those risks he promised and gave us a fight well worth our money. Although he dominated Condit for almost the entire fight, winning every round, he took a beating himself.

GSP characteristically out-wrestled his contender but exemplified his new found aggressive style by landing big shots and bloodying Carlos Condit. One of the elbows he landed looked like it came straight out of Jon Jones’ repertoire, leaving a large gash on the side of Condit’s head.

Condit didn’t stand much of a chance against the champ except for one moment in the third round when he perfectly executed a left head kick that GSP claims to never have seen coming. It sent the champion to the mat but Condit couldn’t finish him off.

Once St. Pierre got back to his feet, he continued to out-maneuver Condit in striking as well. Despite the 18 month layoff that GSP sustained, he’s back in full force and clearly has every intention of dominating as he did before.

The welterweight champion and number 2 ranked pound-for-pound fighter is now expected to fight the middleweight champion and number 1 pound-for-pound ranked fighter Anderson Silva. This will be the biggest and most exciting fight in the history of the sport between the two best fighters on the planet. According to UFC President Dana White, it will take place this spring at either Cowboys Stadium, in Toronto, or Brazil. It will bet the largest event in UFC history.