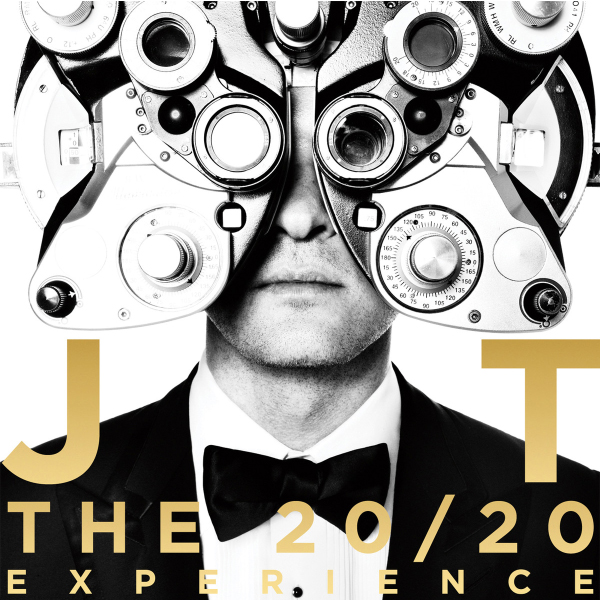 In many respects, Justin Timberlake is untouchable. His accomplishments with The Mickey Mouse Club, N’Sync, the infamous Superbowl incident, appearances on SNL and his feature films pretty much have his legend set with the masses. I don’t even argue, dude is the goods. So why has it taken him so long to get back in the studio? Well, I guess everything I said before that is the answer too, because he didn’t have to. That being said, he must really feel like he has something to give us if he came back after a 7 year layoff. With his last album still being a lot of folk’s favorites, he grabs at a bit more of that magic with some of the same production this time around and gives us some “music that you can see”…thus, The 20/20 Experience. Well, let’s take a look and see what he brings us this time…

1. Pusher Love Girl
Produced by Timbaland, Timberlake, Harmon, & Fauntleroy
I enjoy the cool head nod, finger-snap inducing track the guys produced here. Lyrically, it’s predictable but still pretty cool. Timberlake does a better Robin Thicke than Robin Thicke with his falsetto and overall, this song is nice. Around the 5 minute mark we get the Timbo influence on the drums and the track is much more stripped down at its core with some nice rhythmic elements on the beat. The tone for the album is set and we’re off to a nice start.

2. Suit & Tie
Featuring Jay-Z; Produced by Timbaland, Timberlake, Harmon, & Fauntleroy
The internet exploded when this song dropped. Everyone was screaming “Real R&B” was back and Timberlake was the truth…etc. I on the other hand, was wondering what the fuss was all about even after hearing the song. It was aite, it was aite, but there was plenty of stuff more John Blaze than it. It has since grown on me, but I still don’t know that I’d call this R&B and think that the addition of Hov on the verse just got Timberlake a co-sign…as if he needed it. It’s a cool song and I imagine it will continue to grow on me the more I hear it.

3. Don’t Hold the Wall
Produced by Timbaland, Timberlake, Harmon, & Fauntleroy
Track 3 is really a relationship song dressed as a dance track. The “Please don’t hold the wall tonight” that is the chorus is set between lyrics that talk about how unhappy this chick is and how she should let go and cling to JT for something newer and better. The writing is amongst the deepest and most creative on the entire album and even outshines the track. Even still, there isn’t much of it which is also a theme so far this album. The drums on here and the extra elements make this one sound a little busy, at least for my taste but I imagine that if you rocked out on first listen of “Suit & Tie”, this works for you as well.

4. Strawberry Bubblegum
Produced by Timbaland, Timberlake, Harmon, & Fauntleroy
“Strawberry Bubblegum” is a pretty enjoyable song that almost sounds like the soundtrack to one of those flicks that have a story…or so I’ve heard. With lyrics like “I can tell just by the taste….don’t ever change your flavor ’cause I love the taste…if you ask me where I wanna go and I’ll say all the way….” Timberlake manages to be really suggestive over some slick production that takes all of the Dirk Diggler out of those lyrics. The end result, however, is a song that still has just enough atmosphere to feel a bit gritty in an adult way. Once again, at the 5min mark, we get a change of direction and what was once salacious becomes interesting and above the waist. Lyrically, nothing has changed but the direction of the music makes you feel a bit different about it.

5. Tunnel Vision
Produced by Timbaland, Timberlake, Harmon, & Fauntleroy
This feels so Timberland, I expect to hear Aaliyah or Missy come on when JT does. The title is self-explanatory as the song follows that theme. Each verse just outlines how focused he is on one woman. The real stars of this song are the track and melodies. The arrangement on here is really great. He doesn’t change this one into 2 songs like a few of the previous songs and that’s a wise choice, let this one ride. 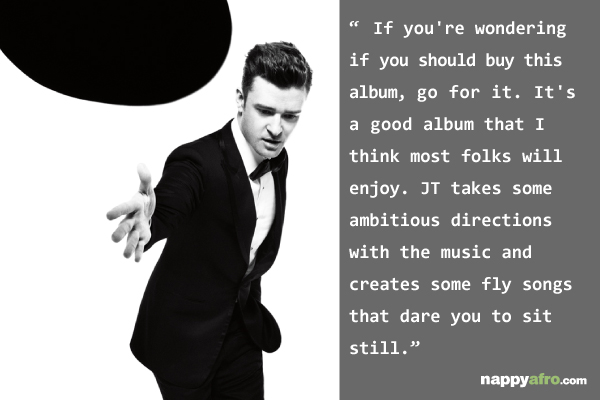 6. Spaceship Coupe
Produced by Timbaland, Timberlake, Harmon, & Fauntleroy
If I’m being completely honest with you…this song is corny as shit. “Spaceship Coupe” asserts that a plane doesn’t fly high enough for where they are going to go and there is only room for two…blah blah blah. Once again, the music is the star. It’s one of the longer tracks that doesn’t feature a change to something else and just like “Tunnel Vision” that’s a wise choice. I think there are more R&B sensibilities on this song than any of the previous songs but at the same time, the strong guitar and tempo put me in the mind of a certain purple musician. It definitely has a throwback vibe to it that makes you just want to put this one on and chill.

7. That Girl
Featuring The Tennessee Kids; Produced by Timbaland, Timberlake, Harmon, & Fauntleroy
Hands down, this is my favorite song on the album. If there was a moment that I wouldn’t disagree that this is an R&B album, that JT had the soul forreal, this would be it. The big band music mixed with some modern styling and barbershop quartet harmonies make this the runaway favorite on this album. Beyond that, the lyrics are even much better. This song is pure goodness and ctually puts me in the mind of the movie A Bronx Tale for obvious reasons (If you’ve seen the movie and heard the song, let me know if you agree.)

Didn’t have to run, I knew it was love from a mile away
But I had to catch you, running through my mind all day baby
They all say I’m crazy, cause anybody even when your father say
That I can’t be with you, I don’t hear a word they say

Now we didn’t have to fall, but fell in love to the bottom babe
No one’s there to catch us when we fell from heaven that day
People always staring, but I don’t care nothing about it babe
Since I saw your face, I’ve been staring just the same.

8. Let the Groove Get In
Produced by Timbaland, Timberlake, Harmon, Fauntleroy, & Noel Williams
Just as often as you can bank on song 7 being the star of an album, you can bank on song 8 being the worst follow-up on the album. It feels a bit more Merengue than the house/electro/dubstep music that has been permeating the airwaves lately and in some form that’s refreshing. The Foreign Exchange has some music that sounds like this on The Reworks but it’s only similar in influence. The arrangement and everything else is done much better on the +FE project. I point that out to say that I’m not completely close-minded to new sounds. This however, is not for me. It does change sound and genre around the 5min mark and becomes something I enjoy much better. Therefore, it’s not a skip and I realize that I may be biased because of how much I love the previous song, so I’ll just move on to the next song.

9. Mirrors
Produced by Timbaland, Timberlake, Harmon, & Fauntleroy
We were fortunate enough to catch “Mirrors” performed on SNL because honestly, the two singles chosen probably moved this album into some pretty elite categories based on how music sells nowadays. It’s a huge arena styled pop song that is expertly arranged and well written. I’d say this is my second favorite song on the album and a great choice for a single.

10. Blue Ocean Floor
Produced by Timbaland, Timberlake, Harmon, & Fauntleroy
I’m not here for this track. I try…but it puts me to sleep. Maybe that’s good because that means it’s calm, peaceful and atmospheric. I wouldn’t call it boring but in contrast to the other 9 songs on the album, it’s vastly different. There are some really great harmonies spread over the immaculate string work and used on some of the more interesting lyrics on the album. Like my view of most of the album, I imagine I’m alone in not falling in love with this one, but I tried. It’s not bad, it’s just oddly placed and very slow. Maybe it’s used as the cool down for all the dancing you did in the previous songs…yeah, that’s it.

Bottom Line:
Like I said, Timberlake is pretty much a made man. Folks went crazy over this album saying that it’s so R&B and the best of such that they’ve heard in years (guess they’re not hip to Melanie Fiona, Kelly Price, Ledisi, or Jill Scott who alone released TWO albums better in 2011). Then again, we’re all entitled to our opinion. If you’re wondering if you should buy this album, go for it. It’s a good album that I think most folks will enjoy. JT takes some really ambitious directions with the music and creates some fly songs that dare you to sit still. My job here is to write about and critique the album, being particularly picky at times, and measuring it against other albums. I gave channelORANGE a 4.5 (Which is getting closer to 5 status each day I listen to it…and yes, I’m still listening to it). If I compared this to that musically, while vastly different, they both have some amazing arrangements and musical production.

The disparity between the two (and all of the other R&B albums that I mentioned before) is lyrics. This album is really thin in that area opting more often for short verses, longer hooks and bridges, and very repetitive chants to carry the song. So a 3.5 puts it on par with my rating for Chris Brown’s Fortune, and honestly, that’s about where it belongs.  If the music was less adventurous it’d probably garner a 3. Music is by far the star of this album and if the goal was to dance or be made to dance, I can’t see anything bad to say about it…if you dance, you will definitely do so. I can’t prop this up as a hallmark or beacon back to real R&B because if we’re being real, it’s a pop album. There’s nothing wrong with that, but I don’t think it’s fair we’re giving JT a pass on the same stuff other artists have done and we’ve been overly critical about them not being true to R&B (see Ne-Yo). If you asked me was this a good album, I’d say yep, go get it. If you asked me is this the R&B album that everyone is saying it is, I’d have to point you in the direction of one of those other albums I listed for more complete songs and substance and that’s sort of tragic because based on music alone, it’s consistently better than a lot of things that have come out commercially.