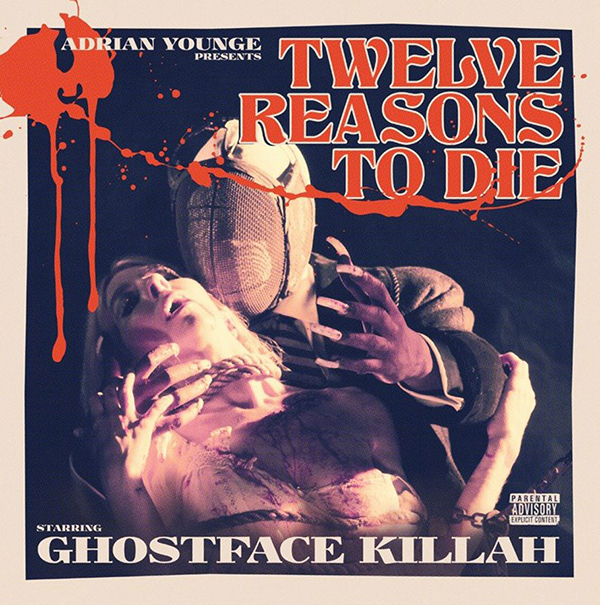 In addition to being the most consistent and proficient member of the Wu-Tang Clan, Ghostface Killah is one of the most influential rappers alive. He wrote film scripts in 16 bars before every rapper started claiming that “my next album is a movie”. He blessed ears with gritty stream-of-consciousness blackouts years before Cam or Wayne. He was a New York lyricist before dozens of interchangeable old-school “keep it real” rappers flooded the market. In addition to that considerable range of traditional talents, one of The Wallabee Kingpin’s defining characteristics is how inventive and thoroughly strange his lyrics can be. That fondness for the bizarre comes through on his latest project, Twelve Reasons to Die, which is a concept album about an Italian gangster (Tony Starks) who is murdered and returns from the dead as a violent monster (the Ghostface Killah) to take his revenge.

1. Beware of the Stare
Produced by Adrian Younge
11 of the 12 tracks on Twelve Reasons were produced by multi-instrumentalist Adrian Younge. In interviews he’s said that he drew inspiration from both RZA and Italian composer Ennio Morricone when putting together the beats for this record. It took me a few listens to get comfortable with the sound of this album. The chorus on “Beware of the Stare” is just as operatic as it is R&B or soul influenced and at first, the warbling vocals bothered me. But once I stopped expecting this album to sound like Supreme Clientele or Fishscale, the beats started growing on me and I could focus on Ghost’s great lyrics: “Murder the don, I’m back with a bird on my arm. Back to pillage, I rock a live grenade as a charm”. Who else would brag about explosive jewelry? This track provides background information on Tony Starks and his eventual transformation into the Ghostface Killah.

It’s the rebirth of a slave brought back as a rebel
I’m immortal, gonna kill generations of your fam
You tried to loathe my legacy away, but I stand, stronger
GFK, the pain prolonger

2. Rise of the Black Suits
Produced by Adrian Younge
The beat on “Rise of the Black Suits” is built around a live drum break, a wailing organ and a bit of piano melody. That’s all Ghost needs to describe how Tony Starks was almost a made man in the mafia, but decided to start a rival crime syndicate instead. The Wu-Tang Clan have always made cinematic music, and this record carries on that tradition. RZA executive produced Twelve Reasons to Die and you can tell that he must still be in director mode following The Man with the Iron Fists.

3. I Declare Ware
Featuring Masta Killa; Produced by Adrian Younge
Ghostface and Masta Killa performed this track on Jimmy Fallon backed by The Roots and the first thought that occurred to me was that “this is what grown man Hip-Hop sounds like”. We’ve seen pop stars and rock bands keep preforming well past the age of 60, but because rap music as a genre is so young, there’s not much of a precedent for rappers over 40. Ghost (who is 42) doesn’t need to act like a 20-year-old to rock the mic; he just sits back and tells incredible stories.

4. Blood on the Cobblestones
Featuring U-God & Inspectah Deck; Produced by Adrian Younge
The best song on the album so far, “Blood on the Cobblestones” features great verses from U-God and Inspectah Deck, who rap from the perspective of Tony Stark’s friends and partners in crime. Twelve Reasons has the feel of a classic Wu project. Early Wu-Tang solo projects benefitted greatly from the contributions of other group members and as the group splintered, the overall quality of the solo albums dropped.

5. The Center of Attraction
Featuring Cappadonna; Produced by Adrian Younge
Backed by the sound of wind and rain, Ghostface gets on his Ghostdini game and lovingly describes the ride or die chick who has come into his life. Cappadonna makes a great appearance on this track, warning Tony that his new girl is really a set-up chick. You can picture Tony’s crime empire crumbling as he threatens to kill his friend if he insults him again.

6. Enemies All Around Me
Featuring William Hart; Produced by Adrian Younge
Even though the production on this album has grown on me, it still has a few weak spots. I’m glad the focus is on Ghostface’s storytelling (he tears this track apart debating with himself over whether he should trust his girl or his friend) but on this song and others, the production is way too conservative. This beat lacks the soul and funk of the music Adrian Younge is paying tribute to. The Morricone track I linked to at the start of this article was full-sounding and absolutely epic. Relying on organic instrumentation over synths and 808’s is fine, but that doesn’t mean that you can’t turn out some bangers. 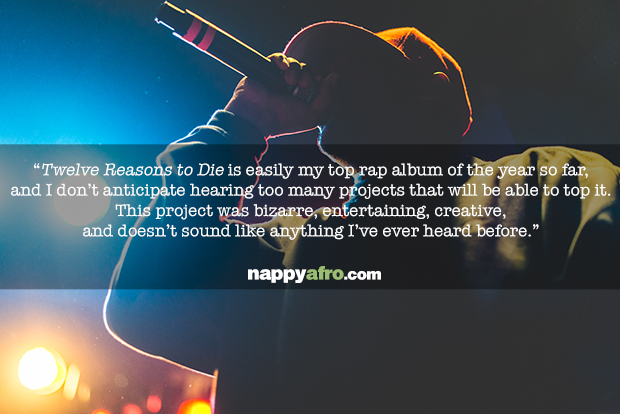 7. An Unexpected Call (The Set Up)
Featuring Inspectah Deck; Produced by Adrian Younge
I love modern rap; I think there are more great artists making music now than ever before. But I really do wish storytelling would make more of a comeback. Hopefully, with Kendrick’s album making such a huge impact, this is a possibility. On “An Unexpected Call” Ghost describes his fall from power perfectly as he gets jumped in the car.

Felt the heat on the back of my neck
Did a mirror check, I didn’t know what to expect
I got knocked out and woke up in the melting pot
I heard the DeLucas laughin’ and then shit got hot
They say ‘Die Tony Starks, you gonna melt like a record
Never to be remembered, never to be respected.’

8. The Rise of the Ghostface Killah
Produced by Bob Perry & Andrew Kelly
The only track on the record not produced by Adrian Younge, Bob Perry and Andrew Kelly do a great job providing the soundtrack as the Ghostface Killah begins his reign of terror. Horn blasts and scratched vocal samples announce that this album has mutated from a crime drama into a horror story. The director RZA makes his presence known by narrating the track’s intro.

9. The Catastrophe
Featuring Masta Killa & Killa Sin; Produced by Adrian Younge
The first minute and a half of this track kills the ominous energy of “The Rise of the Ghostface Killah.” Once Ghost starts rapping though, the vibe comes right back. The highlight of this track is Killa Sin’s sinister masterpiece of a verse. He laughs at his jail sentence and dreams of the day that he can murder his enemies with a Tommy gun.

10. Murder Spree
Featuring Inspectah Deck, Masta Killa, U-God, & Killa Sin; Produced by Adrian Younge
It’s the posse cut! The topic: murder. This is the kind of anthem that I wished showed up a few more times on the album. My favorite verse is either Ghost’s second or Killa Sin’s (who spits gold for the second track in a row). But there isn’t a weak link on the song. There have been rumors of a new Wu-Tang group album floating around (as there almost always is) but if it does happen, I’ll be happy if it sounds anything like “Murder Spree.”

11. The Sure Shot (Parts 1 and 2)
Produced by Adrian Younge
“The Sure Shot” picks up right where “Murder Spree” left off. A pair of fantastic drum breaks are the backbone of the production and Ghostface has no problem keeping up with them.

Ghostface Killah’s back attacking villains
Hanging from the ceilings
Godfather motives, gangsta mentality
Black superhero with the immortality
Forever, I be creeping in a black mist
Ill night vision with the militant tactics
I glide through the air like a swarm of bees
Shake niggas off quick like a dog with fleas
Raw meat, leave bodies slumped in the street
Revenge is the spice of life, it’s so sweet.

12. 12 Reasons to Die
Produced by Adrian Younge
The director is back to put the finishing touches on “the story of the Ghostface Killah”. Younge arranges a nice instrumental to play out the album. In a recent interview, Ghost explained how he wanted to become more prolific to keep the rap game dialed in on him, making different kinds of albums to interest different kinds of people. He definitely succeeded with this crazy Italian horror film concept album.

Bottom Line:
Twelve Reasons to Die is easily my top rap album of the year so far, and I don’t anticipate hearing too many projects that will be able to top it (unless we finally get that DOOM/Ghost record). This project was bizarre, entertaining, creative, and doesn’t sound like anything I’ve ever heard before. There is also an alternate version of this record being released that features Apollo Brown beats which I’m very much looking forward to hearing.