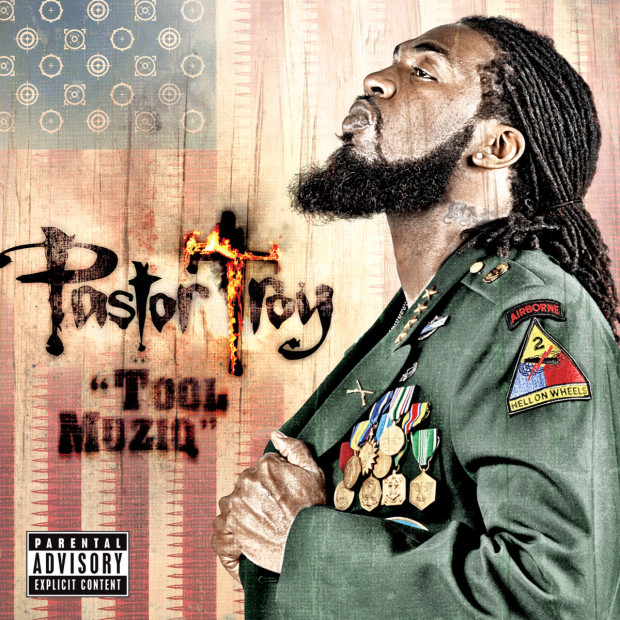 Yo, wassup world, this is your muthafucking boi P Body. First of all I got to give a shout to everybody that been coming thru the site, and showing mad luv. Second I got to get straight to this review!

Pastor Troy is back with another album called Tool Muziq. This is supposedly his last album and then he’ll be out making rock music. I like rock music but I don’t see PT Cruiser doing that shit though. At the current state of hip hop, its really hard to push any units, and everybody is listening to them bullshit A&R’s and labels but at the same time they can’t seem to push 10,000 copies on the first week release since they are listening to the A&R, I say just do you, and stay true like 2Pac say.

1. Tool Muzik
Alright people, the first song on here is called “Tool Muziq”, same as the title of the album. The song starts off with a foul potty mouth little kid talking shit. It don’t stop either, another dude comes in after that, and just talking about the regular shoot’em up bang bang type shit.. The beat is alright though; I’m digging the track actually. Pastor Troy does his thing on here; this is a typical Pastor song. I wouldn’t listen to it all the time though.

2. Saddam
This track right here isn’t that bad. Once again, it’s your typical Pastor Troy. Not that bad though.

3. That’s The Move
This track itself isn’t that bad, but I can’t listen to it a lot though. The concept is the same as a lot of rappers nowadays. Come on people! Let’s be creative!

4. I’m Fucked Up
“I’m Fucked Up” isn’t all that to me. I’m not really feeling it, the lyrics are too simple! The beat sounds too much like everybody else shit, I mean since he is from the south that is the sound but look at Outkast, Goodie Mob, old UGK. Questions? Skip this track.

5. Wanting You (feat. Gangsta Boo)
Dang, the next song is featuring ex Three 6 Mafia member Gangsta Boo. Their rapping over Three 6 Mafia’s 1997 “Late Night Tip” instrumental. Now lets rewind back to 2001, didn’t Gangsta Boo get saved, and changed her name to Lady Boo? She is on this song talking about fucking Pastor Troy, and etc. I use to like Boo but after she converted, and then went back, it’s not much I can really say about her. This song is decent, not all that, its your typical fuck song. We got too many of those right now, its time for more diversity, and creativity. This song isn’t better than Three 6 Mafia, so let’s skip this one but it was a good effort.

6. The Belt
Okay when I first heard this track I thought this was a song but after listening to 1:30 of the track I realized that this isn’t a song but its more of a skit. He is shooting at people and shit like that. Supposedly some kids broke into his truck, and stole his belt and his music. Skip this shit

7. No Money
He jacked 2Pac’s “When We Ride On Our Enemies” (Original track). The chorus to this song is simple and weak. He rides the track alright but 2Pac did a hell of a job better. A lot of times you got to leave certain shit alone. This song isn’t that bad though, I get the concept when I listen to the lyrics.

8. Hard For The Money
I’m not feeling this song that much. He did a 2007 version of Donna Summer’s “She Work’s Hard for the Money” from the chorus. Skip.

9. Digital (feat. Fabo & 2Dolla of D4L).
The track is alright, it sound like something I’ve already heard. I thought this track would be some kind of snap shit when I seen Fabo & 2Dolla on here but they fooled with this. I guess they also see that the snap shit is gimmick. I don’t like this song much but the beat is alright though.

10. In My Truck (feat. Hitman Sammy Sam)
I haven’t heard from Sammy Sam in years but Pastor Troy tried to resurrect him. The beat is pretty good and the song isn’t that bad. So I’ll give this song a pass.

11. Still Looking (feat. Mr. Mudd)
I’m sure you get the concept of this song (“She still looking at my car”). I don’t need to explain no further on this song. I’m not feeling this song much; it isn’t bad though.

12. I’m Down
This song has that Rock/Hip-Hop feel to it with the funky guitars, but it got that snap on the track. Nowadays that’s annoying, but this track isn’t that bad with it. Don’t get me wrong, I hate that snap shit but this isn’t a snap song. The song is decent; you’ll probably catch a nigga rolling in the hood playing it.

13. Hey Mama
Another 2Pac jack track. Is this CD a mixtape or something? Anyways, this song is to all the mothers with thugged out children or them being in prison, the song isn’t that bad. It got a concept to it, you don’t hear too many people doing shit right nowadays and its good to hear something that has a subject matter besides the same ole “24’s”, “Snap, Pop Lock It” and you get the rest of the picture.

Bottom Line:
Overall, this album isn’t bad. I’ll say it’s an average album, not something I’ll buy nor ride to everyday. I can admit though some songs on here, I’ll jam to at times. I’m not a big Pastor Troy fan but I give that dude mad respect and especially how he went at Master P back in 1999 when Percy was the man. Hip-Hop right now really needs a rebellious real album with no fillers but at the same time something that everybody can appeal to at the same time. PT Cruiser needed another “Vice Versa”, one of his best songs to me. Good effort from a Georgia native.

Download: Pastor Troy feat. Hitman Sammy Sam – “In My Truck With Me”