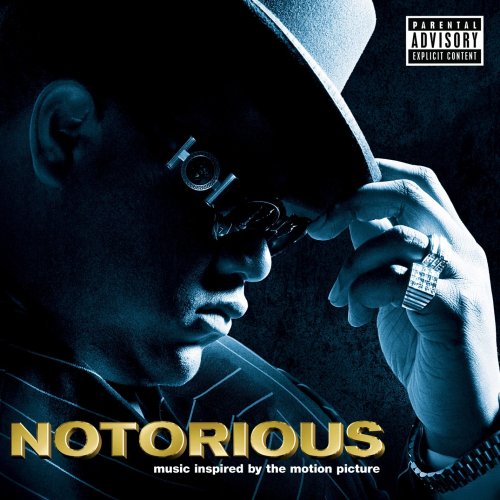 I wanna make things clear; I love Biggie. Before people started calling me a “Jay-Z stan”, The Notorious B.I.G. was my hands down best MC of all time (I’ve said this before but still…). But for some reason, I’m still unsure about the Notorious movie. Not to say I’m not curious; there’s a lot of stuff that I’m curious about seeing in the movie (How Gravy/Jamal Woolard pulls off the role as Biggie Smalls is one thing). I guess one thing they might keep me out of the theaters is that the movie has a “should be onVH1” feel (And I’m only speaking from seeing the commercials and trailers). All that aside, one thing I will be doing is checking out the soundtrack. Headlined by Jay-Z’s “Brooklyn Go Hard” & Jadakiss’ “Letter To B.I.G.”, the rest of the album is like a greatest hits album with some unreleased demos thrown in for good measure (and an “Unforgettable”-style duet with his son). We usually don’t review album like this but it’s a slow month. I also won’t go to in depth about the previously released songs. Let’s see how well this soundtrack stacks up.

1. The Notorious B.I.G. feat, Bone Thugs-N-Harmony – “Notorious Thugs”
Produced by Steven “Stevie J” Jordan & Sean “Puffy” Combs
This was originally on Life After Death (It started off the second disc). I probably would have started with “Kick In The Door”, but this works too. Biggie’s verse is still and always will be sick. Shout out to DJ LP in the forums who posted this song up a few weeks ago. “Just Bone and Biggie Biggie!”

2. The Notorious B.I.G. – “Hypnotize”
Produced by Deric “D-Dot” Angelettie, Ron “Amen-Ra” Lawrence & Sean “Puffy” Combs
This also originally appeared on Life After Death. I remember being so excited when I saw the video for this (Big & Puff driving backwards is classic!).

3. The Notorious B.I.G. feat. Lil’ Kim & Puff Daddy – “Notorious B.I.G.”
Produced by Daven “Prestige” Vanderpool
Okay, I see where this is going. I wish they would have went ahead and put the original “Real Niggas” song on the soundtrack . That’s the reason I never really was into this song; I like the original too much to just hear a chopped up verse. I’m surprised they let a Lil’ Kim verse on this album. This song originally was featured on Born Again.

4. The Notorious B.I.G. – “Juicy”
Produced by Pete Rock
“Super Nintendo, Sega Genesis. When I was dead broke, man I couldn’t picture this” Here we go. This is the kind of thing I hope is brought out in the actual movie. This is Big’s first hit and probably should have lead off this album. Originally off his debut Ready To Die.

5. The Notorious B.I.G. – “Party & Bullshit”
Produced by Sean “Puffy” Combs
I figured they would put this track on here. Can you believe this song is from 1993? Do you remember the Who’s the Man? soundtrack?

6. The Notorious B.I.G. – “Warning”
I wonder why they put “Warning” on the soundtrack but left out what might be Biggie most recognizable hit, “Big Poppa” (After the music videos came out, these two songs are like bookends)? They both show the variations of Ready To Die.

7. The Notorious B.I.G. feat. Faith Evans- “One More Chance (Remix)”
Produced by Sean “Puffy” Combs & Rashad Smith
A more updated and refined version “Big Poppa”. Rappers are still following this blueprint today. Now the other version that was on Ready To Die; thats another story.

8. Jay-Z feat. Santogold – “Brooklyn Go Hard”
Produced by Kanye West
This song is supposedly going to be on Jay-Z’s upcoming Blueprint 3 also; I like it. Kanye must be really into sampling “alternative” artists these days since this song is almost in the same vein as “Swagger Like Us” (Where he sampled M.I.A.). A lot of people didn’t like Jay’s flow on this one, but I think it works. This was a good move putting a Brooklyn great on the soundtrack about the life of another Brooklyn great. But where in the hell is that song with MC Lyte?

9. Jadakiss feat. Faith Evans – “Letter To B.I.G.”
Produced by Needlz
Is it me or does Jadakiss make the best Biggie tribute songs? First it was The Lox’s “We’ll Always Love Big Poppa” and now this. It doesn’t sound forced or fake. The beat is the right tempo and mood with Kiss sounding effortless over it.

11. The Notorious B.I.G. – “What’s Beef”
Produced Nashiem Myrick, Carlos “6 July” Broady, & Paragon
I remember when Life After Death first came out and me and my friends were trying to figure out who was in the Commission roll call in the beginning of this song: “Uncle Paulie, P. Diddy, Caesar Leo DeGenero, Tony Baltimore, Iceberg Slim”. I’ve heard people rap on this beat since then and I scratch my head on why they would even try. Biggie murdered this! “Make my name taste like ass when you speak it, see me in the street, your jewelry you can keep it.”

12. The Notorious B.I.G. feat. Puff Daddy, Too Short, & Carl Thomas – “The World Is Filled…”
Produced by Deric “D-Dot” Angelettie & Sean “Puffy” Combs
“When the Remi’s in the system, ain’t no tellin, will I fuck em will I diss em, that’s what these hoes yellin”. I hope we all know by now that this was Biggie’s line first (Not to say Jay didn’t do it justice). I could think of a lot better songs to put here but maybe it relates more to film? Originally on Life After Death.

13. The Notorious B.I.G. feat. Christopher “CJ” Wallace Jr. – “One More Chance/The Legacy (remix)”
Produced by Sean “Puffy” Combs & Rashad Smith
When I first heard about this, I thought it was gonna be terrible. Why not use “Juicy” or another song Biggie’s not say “Sexing me while your man masturbates”. But then after hearing it and understanding that CJ never really got to know his father, the song is kinda…uh, touching. It’s almost exactly what Natalie Cole did with her deceased father, Nat King Cole.

14. “The Notorious Theme”
Composed by Danny Elfman
A score from Notorious by the same guy that made “The Simpson’s Theme”, scored Pee-wee’s Big Adventure, and won a Grammy for scoring Tim Burton’s Batman

15. The Notorious B.I.G. – “Microphone Murderer (Demo)”
16. The Notorious B.I.G. – “Guaranteed Raw (Demo)”
17. The Notorious B.I.G. – “Guaranteed Raw (Demo)”
The next three tracks are previously unreleased demo tracks by Biggie early on when he was still trying to get on. I find it funny that he has a line here that says; “I don’t fuck with Saint Ives” when later he would go on to do a commercial for Saint Ives. It’s good for fans to hear B.I.G.’s early material. Even though the quality is not that good and Biggie was still honing his craft, there are still glimpses of greatness; “It’s Bed Stuy Brooklyn where this rapper was originated. Your rhymes ain’t shit, they must be constapted”

Bottom Line:
I feel this soundtrack could have gone either way. The makers could have released a full Brooklyn bred line up with rappers like Big Daddy Kane, Mos Def, Talib Kweli, & Fabolous. Or they could have released a 3 disc set of all of Biggie’s songs (uncut). They tried to go both ways to so-so results. Most of these songs were already released on Biggie’s Greatest Hits album 2 years ago. Most Biggie fans with just download the new tracks and the ones who are not super fans will also skip the unreleased stuff. Hey, at least is gives light to one of the best to ever do it. Brooklyn stand up.