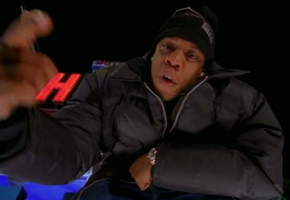 With all the recent hype surrounding Jay-Z and the upcoming “official” release of The Blueprint 3, I think it’s only right for Hovi to be feature in this week’s Friday Night ‘Fro. I could have went with the documentaries like Backstage or Fade To Black, but I had to take it back further than that and go with Streets Is Watching. Even though Jay is on some next shit these days  (“Hov on the that new shit/Niggas like how come?/Niggas want my old shit/Buy my old album” – “On To The Next One”[The Blueprint 3]), it’s still good to go back to 1998 and see him in at his most gutta state.

I also think that during the boom of “straight-to-movie” era of Hip-Hop in the late 90’s/early 2000’s (Ex. MasterP’s I’m Bout It, Three 6 Mafia’s Choices, Cash Money’s Baller Blockin’, etc.), Streets In Watching is the best out the bunch. Why? Jay and Dame did a smart thing by basically making it a movie that connects music videos together (Mostly from In My Lifetime Vol. 1). You don’t have to see (much) wack acting. Plus, because of the music videos, the film quality isn’t that bad either (Compare the camera quality between I’m Bout It and this and you’ll see…). Then you add in the soundtrack with songs like “Where I’m From”, “Streets Is Watching”, “Friend Or Foe”, & “Face Off”.

Check out the movie and tell us what’s the difference between a 4.0 and a 4.6.