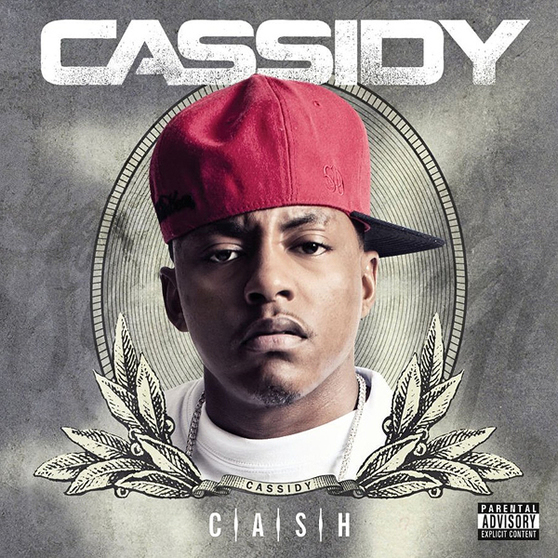 Back in my high school days (2002-2006) I remember Cassidy being one of the few rappers new on the scene that my friends and I talked about. His debut album Split Personality and various mixtapes (i.e. Cassidy vs. Lloyd Banks) supplied plenty of material for conversation and discussion. But oh how things have changed now in 2010. After three solo albums (Split Personality, I’m A Hustla, B.A.R.S.: The Barry Adrian Reese Story) and personal life struggles involving a murder case, jail time, and a car accident, Cassidy arrives at his fourth studio album entitled C.A.S.H. meaning “Cass A Straight Hustla”.

For those like me that have been following Cassidy’s career since the infamous freestyle battle against Freeway, then you know clever punchlines and witty lyrics with solid production to match are to be expected. Well unfortunately those expectations end up being too much when it comes to C.A.S.H., which falls way below the quality of Cass’s three previous albums. Where past albums had hit singles like “Hotel”, “I’m A Hustla”, and “My Drink N’ My 2 Step” that garnered success on the charts and sales at the registers, a song of this kind is nowhere to be found on C.A.S.H. and that’s one aspect that really hurts any future success for the album. Even though “Drumma Bass” was released as the first single it really doesn’t posses the necessary qualities to become a smash and mainstay in the clubs like typical hits. While the song had potential to make noise with suitable lyrics from Cassidy and a catch hook, it’s the imitation Swizz Beatz production that ultimately limits the song from doing more.

Along with the aforementioned lack of hit singles, production value is another aspect that keeps C.A.S.H. from being a superior album. No longer being affiliated with Swizz’s Full Surface Records means there’s no Swizz Beatz production to be found on the entire album. While Swizz currently might not be in top form (see: “Roman’s Revenge”), it’s hard to argue the chemistry between these two as heard on previous efforts like “I’m A Hustla”, “B-Boy Stance”, and “Tha Problem”. This time around Cass is found behind the boards on half of the album’s fourteen tracks (“Paper Up”, “All Day All Night”, “Drumma Bass”, “Hate Me Or Love Me”, “I’m A G Boy”, “She Addicted”, “Music In My Blood”), whether as a track’s co-producer or sole producer. While a majority of the tracks don’t hold up production wise, there are a select few that do Cassidy’s lyrics justice like “Monsta Muzik” (Produced by B!nk), “Paper Up” (Produced by Cassidy & Neo Da Matrix), “One Shot” (Produced by Vinylz), and “Peace” (Produced by Boi-1da).

Even though those aspects hold the album back from its potential, Cassidy proves that he’s still strong lyrically as evident on tracks like “Monsta Muzik” and “One Shot”. Although his punchlines don’t have impact and cleverness they had in his younger days, he’s still able to deliver a few lines that will have listeners hitting rewind. While Cass’s lyrics are solid they are also flawed especially when matched with cliché subject matter and ineffective topics. Such is the case on “Girl Like Her” (Featuring Mya), “Awww Shit” (Featuring Red Café), “She Addicted”, and “All Day All Night” (Featuring Game). Take “All Day All Night” as a prime example, which has Cassidy and Game incorporating a back-to-back style of rhyming over some simplistic, dull production with a less than stellar chorus that all sound uninspired. Unfortunately these instances show up far too much over the course of fourteen tracks.

Bottom Line:
Following B.A.R.S.: The Barry Adrian Reese Story, Cassidy’s career was looking at a comeback after overcoming the murder case/jail sentence and car accident. While that album failed to achieve the Gold certification status that Split Personality and I’m A Hustla earned, it was still able to chart well on the Billboard 200 with moderate sales and put Cassidy’s name back in the news. With C.A.S.H. it feels as though Cassidy has lost a step or two from the level he once was as an artist and will be placed in the category of “rappers who had the potential but missed the opportunity”. Unfortunately for Cassidy, C.A.S.H. won’t do much for him in terms of sales and increasing his status in a game that’s filled with new generation of rappers like Drake, J. Cole, Nicki Minaj, Wiz Khalifa, and Waka Flocka Flame. With only a select few of tracks worth the time, C.A.S.H. ends up being an album not worth the listen. Loyal Cassidy fans may (or may not) enjoy C.A.S.H. while new listeners are better off checking out his earlier albums for a Cassidy that was once considered the next of the young breed of rappers.