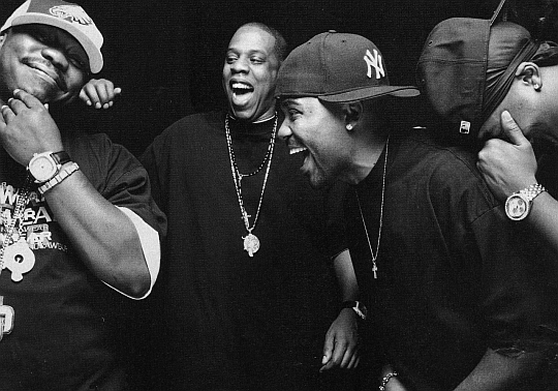 Remember earlier, when I said I had a reason for evaluating the teams I did? Here It is! We all know about the history of Roc-A-Fella records. Imagine things went a completely different route though! Let’s say Jay-Z, Dame Dash, and Biggs didn’t get an ugly divorce. Instead of breaking up they decided it was time to make the “Dynasty” into an empire. Collectively they all could have brought so much to the label that Def Jam would have looked like E-1. The ROC could have been the kingdom of….. well other kingdoms. Before I get ahead of myself lets take a look at the roster they had in place before they split:

After the split many of these artist were let go. Jay-Z went on to become the President at Def Jam and signed (or help sign) some of the hottest rappers we have in the game right now (but made some mistakes as well). Look at some of the better decisions Jay made:

Imagine that these artisst were to sign to Roc-A-Fella instead. At the time Jay was using a pitch like this to sign artist, “I was a rapper, but now I am a CEO trying to help the next generation”. With the help of Dame, I can see everyone here except Nas (Because of the whole crew dissing him for so long).

There is also one big act that Jay-Z almost signed that I feel like Dame would have found a way to make happen, no matter the price.

Combine all of these acts with the roster Jay has built at Roc Nation!

Okay, now lets look at some of the things Dame and Biggs would have done. First off they would have kept Cam’ron around even though he and Jay-Z didn’t get along. They would have gave Cam an opportunity to start Diplomatic Records through Roc-A-Fella. Dame also believed in Kanye and his vision before Jay, so he would have given Yeezy the opportunity that he would give Cam. Thus now you have Dipsets roster and G.O.O.D. Music’s under the Roc. Those artist are crazy:

There were artist that Dame also intended to sign towards the end of the Roc Dynasty:

As far as Lil’ Wayne developing Young Money, I think it would have happened still. Remember, Birdman wasn’t interested in Young Money until Drake and Nicki Minaj came around. As hard as Wayne works, I happen to think him being attached to the Roc would have only made him that much hungrier to have his own label. I think Jay and Dame would also make sure some of the bench warmers weren’t actual artist on his label. Not only do I think Drake and Nicki would have been a part of YM, but I think Spitta would have stayed. Remember, Dame loves Curren$y so I feel like he would have taken him under his wing.

To sum it all up, the Roc-A-Fella Dynasty could have been the Empire. Imagine having the combined rosters of Roc-A-Fella, and Roc Nation. Then turn around and have Young Money, G.O.O.D. Music, and Dipset being funneled through Roc-A-Fella. Even if things wouldn’t have turned out exactly like this, it is hard to deny how interesting this team could have been.