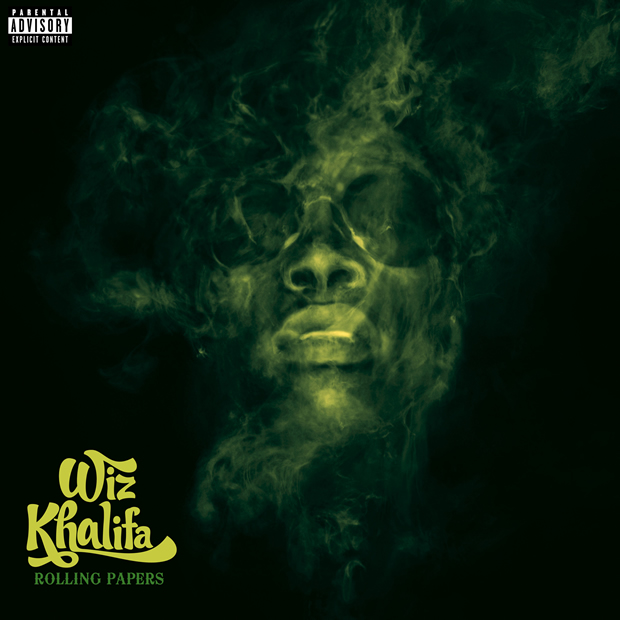 Wiz Khalifa is one of the new stars on the Hip-Hop scene. He is known mostly as a modern day “weed rapper”. His critics often complain that his rhymes are shallow as it is really rare to hear the young emcee from Pittsburgh spit about anything outside of money, hoes, clothes, and dro. He is however one of the latest to develop an over whelming amount of buzz without the help of a label. With his major label debut, fittingly titled Rolling Papers, we will see what this cat from the home of the Steelers will bring to the game.

1. When I’m Gone
Produced by I.D. Labs & King David
This track starts out with a slow piano instrumental that last for an entire minute, and makes you think that the first track will not see Wiz rapping on it. I am shocking impressed by Wiz’s rhymes on this. He is obviously directing the first verse to the critics.

And they say all I rap about is bitches and champagne/You would too if every night you seen the same thing/Money wall to wall, young famous nigga, spend it all

He makes no apologies for doing him and that really impresses me. This is a nice way to start out the album.

2. On My Level
featuring Too Short; Produced by Jim Jonsin
This is about women, weed, and money. The rhymes aren’t really anything special, but the production on this track makes the track catchy when you combine it with the hook (“I’m on my level”); simple but it does the job.

3. Black And Yellow
Produced by StarGate
You know what is. The first single from the album and we all know this was a monster hit. The fact that the Steelers had such a successful year (Coming in second to my Packers) only made the song that much bigger. I can’t remember the last time I went a whole day without hearing somebody bumping this in their ride.

4. Roll Up
Produced by StarGate
The second single off of the album. Unfortunately this track hasn’t had the same effect that “Black And Yellow” had. The video had one of my favorite of the “Diddy Girls” in it, Cassie. The track has done okay but this has some people questioning Wiz’s career. King Jerm even claimed that his career is over. The song is nice though. Its definitely has a summer vibe to it and I can see the ladies loving this track.

5. Hopes & Dreams
Produced by Brandon Carrier & Mr. Pyro
Outside of “Black And Yellow”; almost every verse from Wiz thus far has him either mentioning or referencing getting high. This is another track that is for the ladies. This is a definite skip for me, but some people will like it.

6. Wake Up
Produced by StarGate
This track has a radio friendly vibe to it. Nice poppy beat and a hook that finds Wiz holding a melody. It isn’t bad, but almost half way through the album and it feels like it could be the soundtrack for a Steve Carell movie.

7. The Race
Produced by I.D. Labs
Life is a race. This is another song about weed, women, and money. The album is starting to get hard to listen to.

8. Star Of The Show
Featuring Chevy Woods; Produced by I.D. Labs
This beat sounds like it would fit in perfectly with So Far Gone production wise. Even with that said it is very apparent that Wiz doesn’t have much to speak about. He has just found another way to speak about people wanting to be him.

9. No Sleep
Produced by Benny Blanco & Noel “Detail” Fisher
“No Sleep” is a track that is about Wiz and his life as a party; thus he gets no sleep.

10. Get Your Shit
Produced by I.D. Labs & King David
Finally! This is a track that stands out. Not because it is supremely lyrical or anything, but because he picks an actual subject to speak on. This track is about Wiz getting tired of a woman who he is involved with, and then finally deciding to end his relationship. He speaks about his grind and her complacency in the relationship. This is a definite standout.

11. Top Floor
Produced by Andrew “Pop” Wansel & Warren “Oak” Felder
This is a definite skip! The lyrics are about the same quality of the rest of the album but the production is terrible.

12. Fly Solo
Produced by I.D. Labs
I don’t know why, but I really like this song. It has a quality about it that I think the radio will love. This is my pick for the next single. The production is something I would expect to hear from Travie McCoy of the Gym Class Heroes. Wiz is explaining why he’s single.

13. Rooftops
Featuring Curren$y; Produced by Bei Maejor & Clinton Sparks
The first time these two got together, it was to drop How Fly. These two definitely have a chemistry that reminds me of Red and Meth. They need to do an album at some point. Anyway this is a song about reflection (“Use to not be allowed in the building, now we are on the rooftop”). I think Spitta had the best verse on the track by far.

14. Cameras
Produced by I.D. Labs
This is another song reflecting on where Wiz has been. A sort of rags to riches story. This is a nice way to end a debut album. I really am feeling the production on this too.

Bottom Line:
Any one who has read my reviews probably notice how often I like to quote lyrics on songs that I feel like are the highlights lyrically. This may be my shortest review ever because lyrically Wiz isn’t the most intricate (Which is fine). Honestly, Tupac wasn’t the best lyricist, but his subject matter was able to connect with people. Wiz doesn’t have that quality either. Although he does have some nice songs on the album, it is extremely hard to appreciate this as an entire body of work because it really only talks about a handful of issues. Wiz often would shows his distaste for his critics, but simply proved them right through about 90 percent of the album. Maybe King Jerm was right. Maybe “Black And Yellow” has raised everyone’s expectations too high for Khalifa so early in his career. I know many hardcore Wiz fans will love this album but as for me, I’m not feeling it.