Once again your boy B-Easy watched the MTV VMA’s this year (Still without cable) and once again I will give a recap of what wasn’t a terrible award’s show this year. Laptop with a good illegal stream? Check. Twitter page open? Check. Torrents in the background downloading Breaking Bad, Entourage, & True Blood? Triple Check Let’s go:

Before the VMA’s even started, the world was hit with a bombshell at the pre-show: Beyonce announced she was pregnant. She obviously finally listened to “New Day” off Watch The Throne. Hottest womb in the game. 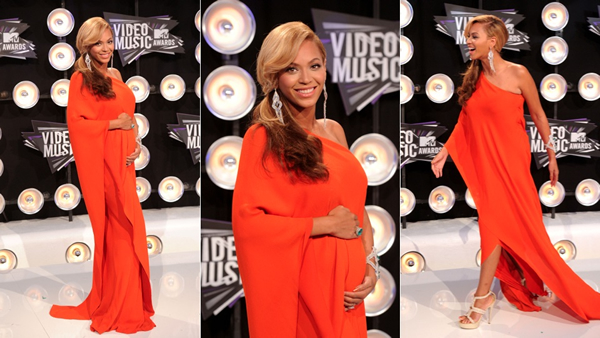 Lady Gaga opened the show as Jo Calderone and performed “You And I”. She didn’t drop character for the rest of the night.

Kevin Hart acted like he had the opening monologue the host usually gets but since the VMA’s had no host this year, it wasn’t. He would have been the first person to host the BET Awards AND the VMA’s in one year. Damn.

Nicki Minaj & Slim Jonah Hill present Britney Spears with Best Pop Video Award. What the fuck did Nicki have on though?

This was suppose to be a surprise performance but we all saw this coming. The performance was just like the last time Jay-Z rapped at a MTV show because someone ran on stage again (Though it wasn’t Lil’ Mama this time). Also, the sneakerheads were all fainting as Kanye was wearing the new Air Yeezy 2’s (I’m not into sneakers so somebody had to point this out to me). Sidenote: Y’all niggas better be happy I didn’t give Watch The Throne 5 Stars. If I was to review it again, I would.

The “Future” Beastie Boys (Will Ferrell, Jack Black, & Seth Rogen) have a dance off with Odd Future.

Nicki Minaj‘s “Super Bass” win Best Hip-Hop Video? Huh? Then again, “Look At Me Now” & “The Show Goes On” was also nominated, so whatever. Nicki also gave a shoutout to Weezy calling him “The Greatest Rapper Alive”.

Pitbull & Ne-Yo Perform “Give Me Everything”

I’ve never heard this song in my life nor do I co-sign this techno/Jersey Shore shit. But since Lindsay Lohan suing him over it, I had to post it. Plus, some of the backup dancers were kinda thick.

I fucks with Adele.

Kim Kardashian presents Justin Bieber the Best Male Video Award for “U Smile.” Isn’t she suppose to be on a honeymoon or some shit? Media. Whore.

Breezy came out in all white, sprinkled in some Nirvana & Wu Tang, and shitted on Spider-Man: Turn Off the Dark. Good job.

Baby in the womb or not, Beyonce killed it. She even undid her jacket and rubbed her belly at end. Jay-Z is a proud poppa. See:

I’ve never heard of Young The Giant or their song “My Body”. I thought they said Human Giant at first then I got excited. But I was let down.

Cloris Leachman comes out with the women of Jersey Shore. Which one is this chick? Just asking.

They do a Amy Winehouse tribute but instead of letting Adele sing a Winehouse song, they get… Bruno Mars? They do show a clip of a Tony Bennett & Amy Winehouse duet so that was kinda cool.

Video Of The Year goes to Katy Perry for “Firework”. I wish Tyler or Beastie Boys would have won but I honestly didn’t care.

Drake comes outta nowhere, sweater and all, and introduces Lil’ Wayne for the show closer

Weezy comes out with an Auto-Tuned microphone and did “How Love To Love”. I still hate that song but not as much as I hate those pants? (What the fuck Wayne?) Thankfully, he also performed “John”. I would have like to see Ross come out but Weezy did go out in the crowd to show Rozay love. All bullshitting aside, this is great promo for Tha Carter IV (Which went on sale at midnight on iTunes right after the show went off).

And that was the show.