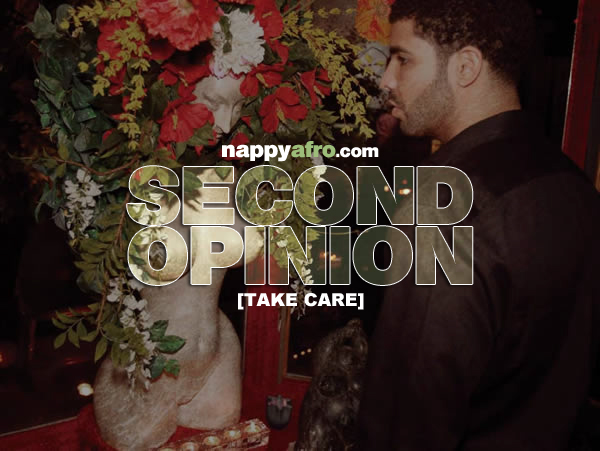 It’s that time again where the rest of the staff gives their thoughts on a major Hip-Hop release. This go around, with only three members deep, we take aim at Drake’s Take Care. If you haven’t already, be sure to check the full track by track review by Saule Wright. – B-Easy

DuB
You know I think Drake may have been the first artist who ever had the pressure that he has had to endure on the horizon of his sophomore release. He has had both critical success and a platinum selling album. Somehow though he was starting to be viewed like an artist who had lost his edge before he even dropped his second major label body of work. I know people have thrown shots at Drake for not being the toughest rapper, but it is his honesty that should be respected, not ridiculed. On Take Care, Drizzy takes the metaphorical bull by the horns almost immediately with tracks like “Over My Dead Body” and his first official single “Headlines”. Although I think Drake is a phenomenal rapper (and it shows on this album) it is his singing that I was most disappointed with on Thank Me Later. He seemed to have lost a step from So Far Gone when he had soulful songs like “Night Off” and “Brand New”, but he didn’t deliver that sound on his debut. Here on his Thank Me Later follow up though he seems to have recovered. Songs like “The Real Her” show his skills as an R&B artist are very real.

The thing that seemingly separates this album from Thank Me Later is the cohesiveness. From the poetry that Drake shares between songs, to the interludes that created bridges to go track to track Drizzy put together a great body of work. One of my highlights on this album was seeing Drake give Kendrick Lamar shine, and hearing him spit a story about meeting Drake through Rihanna. A somewhat low moment was “Practice”. It wasn’t a bad song but I think it would’ve have been a better mixtape track. With that I will end with a quote from Drake that can be found in the album booklet:

Do you love me?
Or do you not?
You told me once
But I forgot
I asked my friends
They said you do
But they are all high
I hope it’s true

H20
I reviewed Thank Me Later last year and gave it a four, while lamenting the singing on the album. Still, it had plenty of great Hip-Hop songs on it that made that rating justified for the time (“Light Up”, “Miss Me, “Unforgettable”, “Over”, “Show Me A Good Time”, etc.). He sang on every track, but when it came time to step up and deliver a hot verse, Drake didn’t disappoint or not give his all.

The problem with this album is I just can’t say the same. Even on songs like “Headlines”, I feel like he’s holding something back. He’s not going in the way he wants to and should be going in. I don’t care what lines you quote from that song, you’d be lying if you said that song wasn’t made for radio. I can’t say the same for a song like “Over”: He wasn’t trying for a radio hit, he was just going in. The hook was a long spoken paragraph!

This emo-rap genre has slowly gained a lot of traction lately and I’m not necessarily against it. But Drake constantly contradicts himself on this album. You can’t have “Lord Knows” and “The Real Her” on the same album in my opinion. I give Drake props because sonically, this album is amazing. Each track flows into the next, and it’s engineered very well. But overall, it’s the embodiment of the drunk dial from “Marvin’s Room”; a bloated, emotional breakdown of an album that can’t decide where or what it wants to be.

B-Easy
Shit was all good just a week ago. Well, to be exact, over two years ago. In 2009, Drake dropped his the mixtape that would start his career, and it was So Far Gone that really shot Dizzy to Hip-Hop stardom. He once again achieved success a year later with his official debut, Thank Me Later, sold over a million copies. What I don’t understand is the problems that a lot of people have been voicing about Take Care and that it’s being too soft or R&B themed. “The Real Her” is reminiscent of “Houstonlantavegas”. “Make Me Proud” reminds you of “Best I Ever Had”. Drake is still making that music that drew so many fans to him. It was the seamless fusion of R&B + rap that is Drake’s bread and butter, and Take Care shows that he may be doing it better than ever.