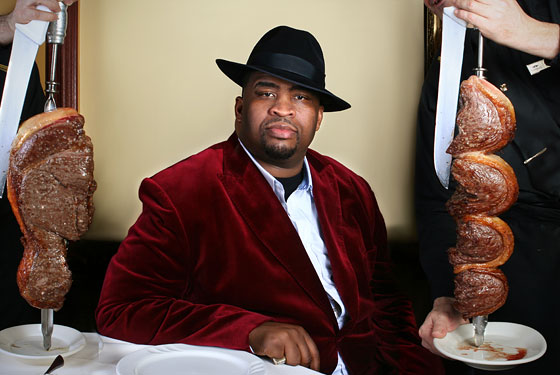 The comedy world lost one of its shining stars (while very much slept on) when Patrice O’Neal passed away. Patrice was ALWAYS funny. There was NEVER a time that he wasn’t, and being that B-Easy and I were just talking about the brother last night hit me in the stomach. For those of you that don’t know homeboy’s history…here is a swipe taken from MTV.

The news of his death was confirmed by two of his radio co-stars on “The Opie & Anthony Show.” The comedian and radio personality suffered a stroke back in October.

O’Neal was best known for his work as a stand-up comedian but also appeared in several films like “25th Hour,” “Scary Movie 4” and “Furry Vengeance.” In addition to being a regular guest on Opie and Anthony’s show, he also made multiple appearances on “The Colin Quinn Show,” “Chappelle’s Show” and “The Office.”
Just this past September, he was one of the many comedians who poked fun at Charlie Sheen during his “Comedy Central Roast.” He also hosted VH1’s “Web Junk 2.0” back in 2006. Earlier this year, his Comedy Central special “Elephant in the Room” premiered on the network.

For those who knew him best, it was his bigger-than-life personality that will be missed most. “Yes it’s true that our pal Patrice O’Neal has passed away,” Opie, a.k.a. Gregg Hughes, tweeted. “The funniest and best thinker i’ve ever known PERIOD. #devastated.” He then tweeted out a link to a video of the late comedian laughing on the radio show, simply adding, “Patrice O’Neal Greatest Laugh EVER.”

Born in Boston on December 7, 1969, O’Neal got his start on the stage and in the early ’90s and moved to Los Angeles to shoot for the big leagues. Eventually, his stand-up career resulted in smaller roles in films, as well as the HBO comedy special “One Night Stand.” He had been living in the New York area at the time of his death.

The New York Daily News reports that O’Neal died Monday night. Shortly after his October stroke, his friend and fellow comedian Jim Norton opened up about his condition on the radio. “We don’t know how he is. We don’t know how he’s going to be,” Norton said. “I didn’t want to do this by myself. I wish we had more news for you.”