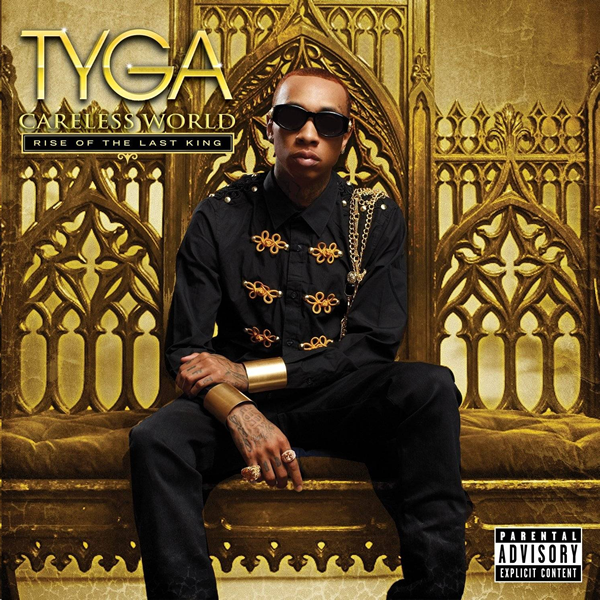 Tyga finally has been granted permission by the Birdman to drop his major label debut, Careless World: Rise of the Last King. It has been pushed back further than LeBron’s headband. So after more than a year of waiting, and watching the success of YM’s big 3, Tyga finally steps into the limelight. I have called him one of the faces to look for from the West, but in ’08 I also said he won’t be around long, after dropping that independent album No Introduction, which was terrible. So which one is it? Will Tyga be around for awhile, or is he just a passing trend? This album will answer these questions.

1. Careless World
Produced By Jess Jackson
The first track on this album is pretty long. The beat switches up twice on here and Tyga does a nice job here switching up his flow as well. He explains the meaning of Careless World, which in his mind the perception he has of the world which is a direct mirror image of him as a person. If you aren’t sure about his flow, after this song you will be surprisingly surprised. (This is also the track with an excerpt from MLK that hindered the albums release).

2. Lil’ Homie
Featuring Pharrell; Produced By Pharrell Williams & Aramis Riley
This Pharrell assisted track really isn’t what I expected when I saw this on the tracklist. Still I do find myself enjoying the track. In essence this track is about Tyga and him coming of age. The hook is pretty infectious, and works well with the beat. Pharrell is pretty much giving Tyga the perfect opportunity to go a little deeper than we are accustomed to seeing but he barely skims the surface.

3. Muthafucka Up
Featuring Nicki Minaj; Produced By Jess Jackson
This song sounds like something that we would have heard off of the Young Money compilation. Nicki gives a below average verse, which is surprising because of the type of beat this is. This track is pretty forgettable though.

4. Echoes Interlude
Produced By Arthur McArthur
This is the first interlude on this album. With soft keys and vocals in the back, Tyga gives a sob story about being ready for love.

5. Do It All
Produced By Jess Jackson
The Interlude leads perfectly into this song. It is about love lost due to insecurities. I’m actually surprised how much I enjoyed this song. Most rappers spit about losing women because of their insecurities, but Tyga takes a different approach. I think so far this is the best joint on the album.

6. I’m Gone
Featuring Big Sean; Produced By Boi-1da
Even though tensions was at an all time high between Young Money and G.O.O.D Music,  Tyga & Big Sean get together on this Boi-1da produced track. When it first started I was expecting Drake to start rapping on this because the subject matter feels like something Drizzy would rap about. Tyga talks about everything from haters to women who he thinks about. Although you may at first feel like this is his best Drake impersonation, it doesn’t come off as forced. It actually sounds genuine. Once it feels like the song is fading out you here Big Sean come in and absolutely kill this beat. So far this album is surprising good.

7. For The Fame
Featuring Chris Brown & Wynter Gordon; Produced By Jess Jackson
Of course everyone knew Chris Brown would be on this album, after all it’s their hit that landed them a Grammy nod. This sounds like some old Bow Wow single where the girl is absolutely in love with the rapper, but avoids the lights and cameras (Ask Tahiry if that actually happens in real life. Shout out to Joe Budden). I am pretty sure this will be a single, and Tyga actually has the most forgetful part on this entire thing.

8. Birdman Interlude
Produced By Arthur McArthur
Damn, I hate when we get Birdman interrupting albums just to spew his incoherent thoughts over an instrumental.

9. Potty Mouth
Featuring Busta Rhymes; Produced By Key Wane & Jess Jackson
This beat sounds so familiar. This is a banger.This may be Tyga’s best outing lyrically in his career thus far. Busta does what Busta always seems to do on other peoples track, but still Tyga does an unbelievable job on this joint.

10. Faded
Featuring Lil’ Wayne; Produced By Donte “Dnyce” Blacksher
Another joint that sounds like it was a left over from the Young Money compilation. How boring is Wayne getting? Tyga still dropped some pretty clever lines. Not bad.

11. Rack City
Produced By DJ Mustard
I love this joint. When it comes on in any club, it seems like it turns into a strip club. This is pure ignorance and just fun. The beat is crazy. Tyga may have put this out at the wrong time though. In the summer, this would have been even bigger. 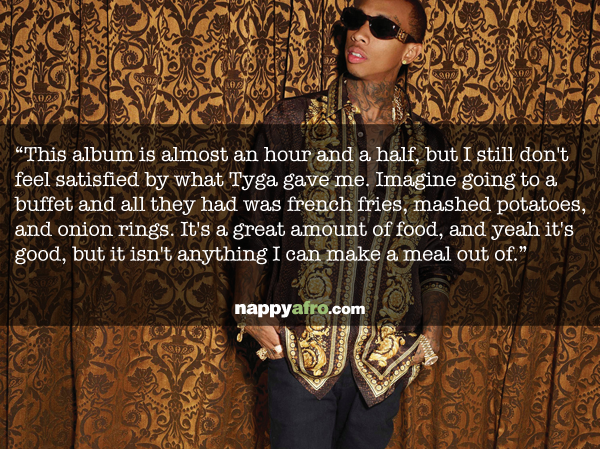 12. Black Crowns
Featuring Cameron Forbes; Produced By David “D.A.” Doman & Jess Jackson
This is a little bit of a darker song. Stress of trying to attain success, supporting his people, and fear of failing are all things that he speaks on in this song. He has become a king, but has a life of darkness, thus the black crown. The song ends with a message from Tyga’s Mom (Who I don’t think understood the songs concept) and tells him how proud she is of him.

13. Celebration
Featuring T-Pain; Produced By Calvo Da Gr8
Tyga and T-Pain do a song that sounds like one T-Pain did back in 2008 with Lil’ Wayne. Not feeling it!!!

14. Far Away
Featuring Chris Richardson; Produced By Jess Jackson
This was the first offering from the album back in July. The song is similar to “Do It All” from earlier in the album. Once again this track deals with love lost. One of the songs could have been left off of the album. Not to say they weren’t both good, but hearing both of these on the same album takes away from it a little.

16. This Is Like
Featuring Robin Thicke; Produced By David “D.A.” Doman
Of course this is going to be a love song, but it not really different that previous two songs about the same thing.

17. King & Queens
Featuring Wale & Nas; Produced By Arthur McArthur
This is the song I anticipated the most from the album. Tyga dropped a line that stuck with me, “They say my flow knocks, well I hope it opens every door”. Wale did his thing as well. I wish he would rap over these type of beats more often. Nas, I can’t front he did unbelievable on this. The stuff he has been dropping lately makes me feel that outside of Andree 3000, his next album is more anticipated than any other Hip-Hop artist for 2012. Great Song!

18. Let It Show
Featuring J. Cole; Produced By Cool & Dre
Cool & Dre drop a jewel off to Tyga with this. Both J. Cole and Tyga dropped some real bars on here. This is another great song. Lyrically Tyga has impressed me on this album thus far.

20. Lay You Down
Featuring Lil’ Wayne; Produced By David “D.A.” Doman
I like this! Soft beat, hard rhymes. Is it believable? Hell no! I don’t believe Tyga is going to kill anyone, but its still dope. This is actually a good verse from Wayne too.

21. Light Dreams
Featuring Marsha Ambrosius; Produced By Jess Jackson
This is the some up of the entire album. His life, his thoughts, his stress, and loved ones and how he deals with it all. I’m feeling this a lot. Once he said that this album is the story of people under 25 and the hardships they have to overcome. This song expresses that thought completely. If you have ambitions to be great this song will hit home.

Bottom Line:
This album had its high moments, and defiantly its low ones as well. Honestly the grade I’m giving it can be deceiving. I’m grading the quality of the album, not just the quality of the songs. As an album, it’s not complete, but yet still too much. This album is almost an hour and a half, but I don’t feel satisfied by what he gave me. Imagine going to a buffet and they had french fries, mashed potatoes, and onion rings. It’s a great amount of food, and yeah it’s good, but it isn’t anything I can make a meal out of. This is what I felt Tyga did with Careless World. Dope songs but I would give up all my french fries and onion rings if you can give me some steak with the mashed potatoes. Still he has greatly improved form his coconut juice drinking days. His flow, his charisma, and some of the pain he was willing to share could have made a great album. But what we now know is that, Tyga is going to be around, and he won’t fade away as I once predicted.