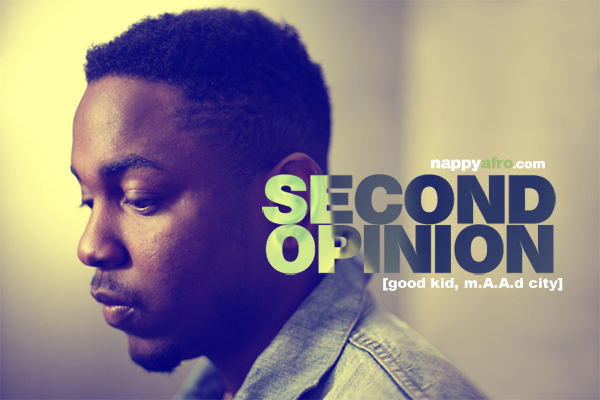 It’s been a pretty good year for music fans across the board. As much as we bitch about the quality and the industry bitches about the pirating, it seems like the music hasn’t suffered at all…and may have even gotten better overall. Enter the official debut of yet another West Coast rapper from an area that seems to be teeming with young talent and a constant race to see who’s next. The amount of pressure heaped upon Kendrick, and B-Easy, for that matter were pretty damn insane. For that reason, it’s only right that after reading his stellar review of good kid, m.A.A.d city, we give you a Second Opinion of one of the most anticipated albums that we’ve seen. – Saule Wright

Saule Wright
It’s pretty well documented on the site how I reacted to K.Dot…but for a refresher, I didn’t understand why everyone was so hype about dude. I found his voice annoying and rhyme-style awkward. I figured it was another flash in the pan guy that the West Coast was trying to make us all like, and it was working on some. I tried the Why You Should Listen mix that DuB made and nothing changed for me. There were a few good songs but nothing groundbreaking. I had no intentions on listening to this album, but I decided to try one last time. Glad I did. This album is an artistic, sonic, and cultural napalm in every sense of the word. It’s got the gritty sound that we seem to require from our Hip-Hop albums if we want to call them authentic. It has fabulous storytelling, not just on a song, but the entire album is a story. It has the subtle nuances such as the “I’ll never face away, I’ll never fade away…(lyrics fade out)….” moment that put that extra bit of personality and quality in the album that let you know, this wasn’t just some mindless album. It identifies, without question, the region it’s from without alienating anyone else that wanted to listen. It even has a blend of radio songs and street songs and some masterful transitions that erase when one song ends and the next begins. Earlier this year I cast my vote for Nas’ Life is Good but I need to reconsider. This album deserves the same praise as Nas’ album did. Where some folks are unwilling to give anything a 5star or classic rating, I feel like Common on this one, “it doesn’t take all day to recognize sunshine”. This is definitely an album of the year contender and 5 star album for me.

Cornell Da Gr8
There was no sophomore slump. I wish I could say the same about my college career. But good kid, m. A. A. d city is on the same level as Section.80. He is going have to stop with all these random punctuation points in his albums though. The only complaint I had about Section.80 was that it sampled too much music that his fans knew. I know it helped bring in new listeners but it was my gripe with the album. I came to hear Kendrick Lamar’s music not Kendrick’s rendition of Bun B’s verse of “Big Pimpin.’” But we did get Kendrick Lamar in his entirety  good kid, m. A. A. d city. We got Kendrick and his family for a little extra-added bonus. We also got risks from an artist we have not seen before. I never saw an artist tie in his album cover to his music. I never heard of a twelve-minute Hip-Hop track. But I never heard Ab-Soul or Schoolboy Q on the album though. That was a disappointment. I have heard that this album deserves the classic stamp. I am not one of those people to give those out like uppercuts. I have to let it sit and marinate for some time. Some recent classics are Return of 4Eva, Kush & O.J., 1999, and Jet World Order.

King Jerm
I have been hearing A LOT of hype about this young cat from Cali. Did all of that make me listen to his music? Nope. This was my first listen to Kendrick and I must say that I was satisfied. Is it this classic that everyone is screaming? Yes and no. Classic these days don’t mean classic like it did back then. Kids these days are used to disposable music like mixtapes, so when someone drops a well put together album, the word classic is mentioned. That being said, I do think this album is 4 star worthy.

GQ Blu
I was a little leery about giving this album a try because before “Swimming Pools” Lamar’s flow and voice made me feel like I could only enjoy him as a guest artist or only for a few songs. After sitting down and giving this album an honest listen I can say that’s not the case anymore as I now appreciate his range and ability to diversify his delivery.

The first thing that stood out to me was the tracklist. When I saw that there were only 12 songs I knew instantly that Kendrick was looking to craft a classic. Most new artists want to throw a whole bunch of music at you and think that makes for a good CD. I appreciate the fact that he went with quality over quantity. The album feels focused and a very fresh perspective on West Coast rap. He’s extremely personal and the album is really inclusive, which is great for fans as it’s always a surreal feeling when you get to connect to an artist.

However, there were times for me when the album started to blend together in the middle, and the trip-hop rhymes that he’s known for with the Black Hippy crew kind of went over my head at times. Yet and still this was a great album and I’m actually happy I gave this a listening and I’ll finally stop sleeping on K.Dot. I can’t call this a classic but this shows me that he definitely has the ability to create one.

DuB
There aren’t many artists who can stay true to themselves while also showing the ability to become relevant in terms of mainstream success. The ones who have been able to do this, we consider the greats (Jay-Z, Nas, Tupac, Scarface, and so on). All of these artists have been able to release albums that have change not only the way Hip-Hop artist make music, but also the way Hip-Hop as a culture view the society. Kendrick Lamar has joined this elite group of titans with the release of this album. During the process of t preparing myself to buy this album, I focused on accepting the fact that the chances of Kendrick being able to duplicate the quality that I found on Section.80 were nearly impossible.  Yet upon the very first listen of the album, I knew that K.Dot had not only made an album better, but a classic album as well. I think it has been more than a decade since I have been so adamant and felt this way about an album. Every decision Kendrick made was calculated, precise, and executed perfectly. Every song, every skit, every piece of instrumentation fit perfectly together and there was not one single misstep on this album. I not only love this album as a fan of Hip-Hop and music but I love this album as a human being who can completely relate to stories like “The Art of Peer Pressure”, and find myself reminiscing on my personal Sherane. There are two things I regret about this album and neither are Kendrick’s fault, I wish that I had crafted this album, and I wish that this was nappyafro’s first, and only 5 star album. No disrespect to Nas or Jay-Z but now that we have artist like Kendrick and J. Cole it’s finally time to pass the torch, or they may just come and snatch it.

Arkitekt
Damn, where do I start? First, I’ll have to say that Kendrick gave us one of the best Hip-Hop storytelling albums of all time. From “Sherane aka Master Splinter’s Daughter” to “Compton”, he displays vivid lyricism that shows the hood’s temptations, and the difficulty of surviving both mentally and physically. Second, with Dr. Dre executive producing the album, you’d expect to see at least one song produced by him. Instead, Kendrick reaches out to (mainly) his former producers to create a sound that does nothing but enhance the story. I have to give him props for doing this and doing it successful. Third, the guest appearances and skits were perfect. The skits really gave this project life, and helped you see the good vs. evil side of things. Jay Rock killed “Money Trees” and proved he wasn’t the Tony Yayo of the group. Drake impressed me with his verse on “Poetic Justice” (yeah, I said it), and MC Eiht brought us back to that early 90’s West Coast gangsta shit. Finally, this story is actually true. In Hip-Hop, we hear storytelling tracks all the time, but how many of them are actually true. Here, K.Dot gives us a story that changed him as a man, and helped him see the bigger picture of things. I wouldn’t call this a classic quite yet, but it does meet all of the other characteristics of one.