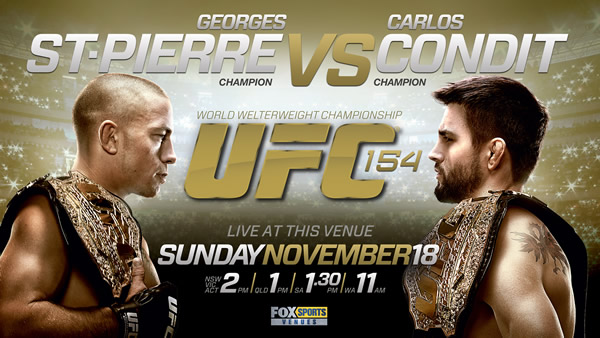 This Saturday we’ve got one of the best fights of 2012 as the welterweight champion Georges St-Pierre returns from his injury/emotional hiatus to face the interim champion Carlos Condit to unify the belt. Condit controversially “earned” his temporary belt in a match against Nick Diaz on Superbowl weekend back in February. Condit lost a lot of fans because of that fight and the “fight not to lose” style he uncharacteristically used. That style, inspired by Greg Jackson, has only fueled the fire of excitement for an inevitable matchup between GSP and Nick Diaz. But we’ll have to wait until mid to late 2013 for that.

Of course, GSP is favored in this weekend’s fight. He claims to be sharpening his striking since that is Condit’s specialty while his opponent is strengthening his ground game. St. Pierre being the dominating wrestler that he is, may be interested in taking Condit down and submitting him, although he wouldn’t be at much of a disadvantage in a striking match either. GSP has perfected the jab, as exemplified in his match against Koscheck, and shouldn’t have much of a problem keeping the distance.

But if he does choose to strike with Carlos, he’ll be wary. Condit is known as a KO artist in the division and shouldn’t have a problem putting the champion to sleep if given the opportunity at a clean shot. The same cannot be said about the champion who has been criticized for his inability to finish opponents and instead beat them in a long drawn out and boring decision. The French-Canadian has since vowed to “be opportunistic” with regards to finishing Condit.

The pair will fight on pay per view this Saturday night at UFC 154. Here are the UFC Primetime episodes to update you on their personal backgrounds.