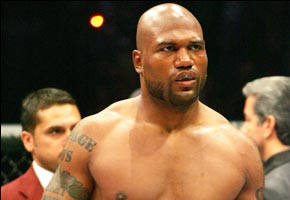 Quinton “Rampage” Jackson loses his light heavyweight title to Forrest Griffin in a unanimous decision on July 5. I can’t buy the judge’s decision…unanimous? Don’t you have to dominate the Champ to get a decision? That didn’t happen, even with Rampage admitting that he “got his ass whooped!” But that is the “realness” of Rampage. Even in defeat he was the man. But I think that this was all conspiracy to get Dana White’s (UFC owner) boy Chuck Liddell the belt back! Chuck beats Griffin, unless Rampage gets a rematch first, then you have Liddell vs. Jackson again which equals BIG ratings. I guarantee you in the rematch that Rampage will dominate, might even knock Griffin out. This is not a knock at Griffin, because he is a tough guy, he was a winner of The Ultimate Fighter reality show. This is a guy who suffered a broken arm in a match and still won. He took Rampage to the limit, but I don’t think he should have been the UNANIMOUS winner. It was a night with good fights but the downer for King Jerm was seeing my boy Rampage lose his title after a 9 month layoff, which he vowed never to do again.