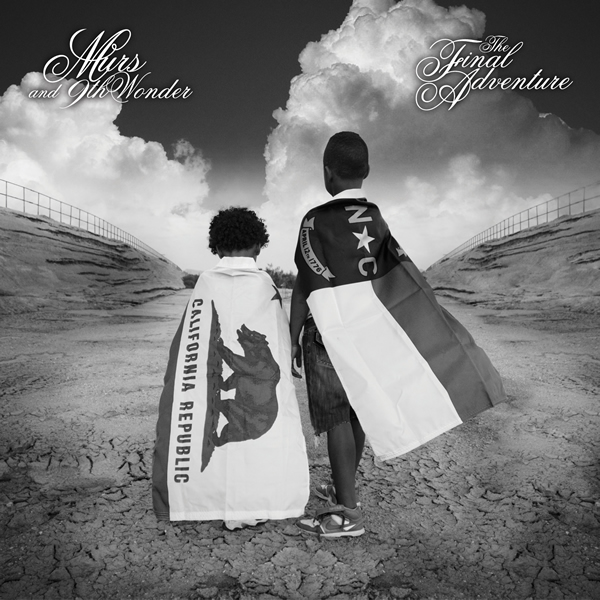 Just like your favorite TV show or that last slice of pizza, all things must come to an end. 9th Wonder & Murs know this and decide to finish up their 8-year career as a team on a high note. Some of you may be shedding tears right now while some of you may not care at all. Either way this should be an epic end to an epic collective. Will this be somewhat lackluster like Seinfeld’s last episode or will they go out with a bang like The Dark Knight Rises?

1. Get Together
Featuring Rapsody; Produced by 9th Wonder
The opening verse is kicked off by 9th’s protégé Rapsody which is kind of strange but I guess this is a way of saying that even though Murs and 9th aren’t making albums together anymore there’s still this MC to keep things rolling. Regardless Rapsody is great here. There’s so many Dark Knight Rises references scattered through her verse that’s probably safe to say that she watched this right before hitting the studio. Murs doesn’t spit a proper bar until the last 40 seconds of the track, which is questionable, but for some reason it all works for the three artists. 9th’s beat is killing it and Murs spits one of the greatest lines in this song saying that him and 9th are: “The closest thing the kids got to Keith and Preem”.

2. Whatuptho
Produced by 9th Wonder
This song is for everyone. It’s not directed at any certain demographic besides the Murs and 9th fans but it is open for new comers too. Check how Murs puts it: “This is for all of us, lovers and the free thinkers/Rozay sippers and the green tea drinkers”. There’s some great witty lines sprinkled throughout this one (e.g. “Take 50 cent and make millions/Word to Chris Lighty”). Even though the beat holds up it becomes repetitive after awhile.

3. Funeral For A Killer
Produced by 9th Wonder
This is the kind of 9th Wonder beat I’ve been waiting for since listening to the album. It’s not dark like Jay-Z’s “Threats” but it’s subject matter is with the question “Who cries when the killer dies?”. Death of a loved one, survivor’s guilt, gang mentality, Think of the track like this: 9th’s beat is the canvas already colored with a dark background while Murs’ words are the paint brush. This song is a piece of gritty, honest, mournful poetry written for a fallen brother.

4. Baby Girl (Holding Hands)
Produced by 9th Wonder
Creating a great relationship song is one thing Murs is associated with and this is no different. With a simple singsong chorus matching the jazzed out sampled beat the scenery is set. This is Murs going down memory lane recalling old relationships and being introduced to the dynamics that come with them. Slick word play is a foot here when spitting game at the ladies with lines like “You know these squares can’t handle your curves”. A homage to oldie love songs is made clear in the way the beat and chorus are constructed. There’s a great horn sample and what sounds like an older drunken man singing the sentimental chorus. I don’t mean to open any just healed wounds from Little Brother fans but you almost expect Big Pooh or Phonte to make an appearance here.

5. Walk Like A Woman
Produced by 9th Wonder
Murs & 9th have made it possible to chronicle a whole experience of first finding sexual identity to finding the right partner to setting up a life with this person in a song that clocks in just over 6 minutes. It’s all done by breaking the song up into three different sections with three different beats. The first verse talks about first discovering the ideas of sex. The second verse is about finding maturity within a relationship and settling down. The third of course details a wedding. All beats are exceptional and Murs’ sincere view of this woman shines through. 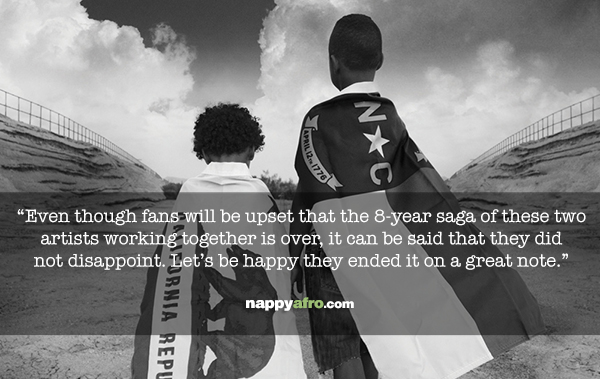 6. Tale Of Two Cities
Produced by 9th Wonder
Story telling rap is definitely one of Murs’ greatest strengths as a MC and coming from a place like California he has a lot to tell. “There’s two sides to my city, a red side and a blue side to my city/Too many died in my city, imagine if we all unified in my city”. This is the chorus creating a picture that shows Murs is yet to give up hope on his community. The slow pace of flow that Murs uses gives 9th’s great soulful beat room to breathe and show off its’ subtle piano keys and saxophone notes. No punches are pulled here with the finger being pointed at all aspects and problems that come with gang related troubles. From the police: “Them white and black cars/Them dudes inside they from streets like ours/So they hop out with their guns drawn/Make us lay down on the front lawn/Knight takes pawn to the holding cell” to the contradictions of gang mentality: “We got a lot of problems, seen a lot of drama/Some believe in Jesus, few of us believe in karma”. The chemistry between 9th Wonder and Murs is so clear here it just makes sense these two have been making music together for 8 years.

7. Dance With Me
Produced by 9th Wonder
After a song like the previous one where things ended on a high note it’s kind of questionable why they have decided to delve back into the premise of troubled relationships again. Even though the lyrics are amazing and the beat ditto it seems like we’ve already been told this story from the last two songs. It’s not the quality of the song that’s troubling it just seems like things are being repeated here.

8. Better Way
Produced by 9th Wonder
Where does 9th Wonder find these samples and how does he create these awesome beats from them? His talent shines through 10 folds on this one. The subject of religion is spoken about here, specially Murs’ religious views and experiences. Much like Tech N9ne’s “Klusterfuck” song Murs speaks on first being baptized as a Christian but then discovery other ways of worshiping a god and converting to Islam and the trials that come with changing belief systems. “When I first quit pork it made my mother shout/Did miss pepperoni, yo no doubt/But I held strong, I was so devout/A little man trying figure it all out”. The chemistry between Murs and 9th Wonder is evident in full force on this track.

9. Whatever You Are
Produced by 9th Wonder
Just when you think the beats can’t get any better 9th hits you over the head with this one! The only bad thing I can say about this song is that it’s too short. Another good thing is at the end of the song there’s about 30 seconds of the instrumental. Not to say Murs doesn’t kill it on the track because he does. In true story telling form he details an encounter with a female in Montreal in 1998 which leads him to his first discovery email (Funny to think about that now right?). Only Murs could make a story about an internet romance interesting. This one is short and sweet.

10. It’s Over
Produced by 9th Wonder
This aptly titled track, which probably has the best beat on the album, covers all bases. Murs doesn’t waste this last opportunity to get out some of his frustrations with the first two verses dedicated to his ex-girl, stans and haters. But just to end things on a positive note they save the last verse to look back at the good times these two artists have had together. “Y’all already know how much fun it’s been/So party on and we catch you on the other end”.

Bottom Line:
For all the Murs & 9th wonder fans this album will be such a hard bittersweet pill to swallow. This album will only frustrate for the fact that this is their swan song.

Even though the album only has 10 tracks they still manage to say so much more then other albums being released this year that have 15 plus songs. Romance may have been covered a little too much on the album but it doesn’t take away from the fact that the songs are good.

The Final Adventure carries with it an important task of giving the fans what they want and that task is completed. It touches on dark issues with songs like “Tale Of Two Cities” and “Funeral for a Killer” while keeping things positive with “Baby Girl (Holding Hands)” and “Walk Like A Woman.” 9th Wonder shouldn’t be over looked either with him bringing some of the best beats to the table. Again songs like “Tale Of Two Cities” shows that Murs hasn’t given up on where he comes from and it also shows he’s not wasting the precious last moments with 9th to put out an album anything less of memorable.

Even though fans will be upset that the 8-year saga of these two artists working together is over, it can be said that they did not disappoint. Let’s be happy they ended it on a great note.