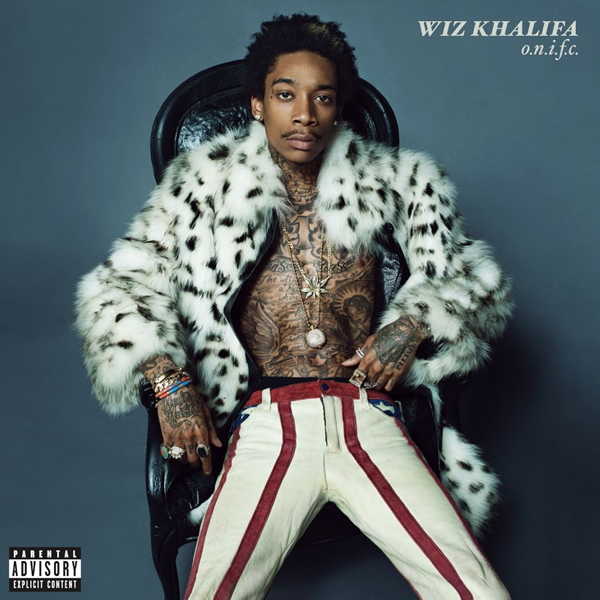 To promote his new album O.N.I.F.C., Wiz Khalifa released a series of videos analyzing the record track-by-track. At the end of each of these videos, there is a clip of Wiz sitting in a dark room in all-black next to a panther. These clips, along with his bizarre album cover, and a confusing music video are all a strange look for the Pittsburgh native. Wiz built his career around being a relatable, laid-back stoner who gave away tons of free music; he’s never struck me as the dark twisted artist type. Let’s see if Wiz decided to change up his sound on O.N.I.F.C. (aka Only Nigga In First Class).

1. Intro
Produced by Cardo & Sledgren
The album starts out with a 40-second instrumental to set the vibe. With rapid-fire hi-hats, echoing snares and a wordless vocal loop, it’s a nice start.

2. Paperbond
Produced by I.D. Labs
The beat on this track is handled by Wiz’s in-house production team I.D. Labs and they do a great job. It’s hazy and blown-out and is exactly the type of thing that Wiz should be rapping over. Wiz has been getting money for a while now, so it’s not unusual for him to rap about being rich. But when he was rapping about money on his Kush & OJ tape, he sounded like a regular dude who managed to become famous and was celebrating. On “Paperbond” he almost sounds bored.

3. Bluffin’
Featuring Berner; Produced by Drumma Boy
This sounds like a classic Wiz mixtape track. He switches in and out of a double time flow over a hyped-up Drumma Boy beat. I thought it was strange that people criticized Rolling Papers for being “too pop”. That criticism is only half-accurate. For some of the songs on Rolling Papers, Wiz just made the wrong kind of pop music. The best Wiz Khalifa songs are catchy, repetitive, and have a great beat (aka. pop music). He probably didn’t need to sing as much as he did on Rolling Papers, but he shouldn’t avoid making catchy music, it’s what he does best.

4. Let It Go
Featuring Akon; Produced by JO A
This is the third song in a row that is almost entirely about how rich Wiz is. But at least he’s reflecting a bit about his new responsibilities: “Sharing this money and trying to get all my niggas up off of them streets/Used to look up some niggas, but now it all seem that it come down to me/Make sure my family gon’ eat.” I really hope Wiz includes more lines like this or at least switches up the subject matter more often, otherwise O.N.I.F.C. could get really repetitive. Kanye West talks about designers and being rich all of the time, but he also raps about how “The old pastor closed the cold casket. And said ‘the church ain’t got enough room for all the tombs.’”

5. The Bluff
Featuring Cam’ron; Produced by I.D. Labs
Even if the subject matter is getting repetitive, at least the beats on O.N.I.F.C. are consistently good. “The Bluff” was produced by I.D. Labs who produced seven of the album’s seventeen tracks. But the biggest draw for this track is a guest verse by Dipset veteran Cam’ron. In his prime, Cam’ron pioneered the free-associative word-mashing that Lil’ Wayne would popularize a couple of years later. The first half of his verse on “The Bluff” isn’t bad, but the second half of his verse makes basically no sense (he even admits as much):

You play? We playin’
Drive by on the way that waving
New five, that’s how we playin’
We that wave, I’m just saying
What you sayin’? What I’m sayin?
Money, hoes, clothes, and mayhem

6. Work Hard, Play Hard
Produced by Benny Blanco & StarGate
StarGate produced “Black and Yellow” and “Roll Up” which were the two big hits on Rolling Papers and they provided Wiz with another radio hit here. If Wiz was trying to cultivate a “serious artist” image by wearing all black and collaborating with The Weeknd, this song definitely doesn’t go with that vibe.

7. Got Everything
Featuring Courtney Noelle; Produced by Sledgren & I.D. Labs
“Got Everything” is one of the most pop-sounding tracks Wiz has ever recorded, and as a pop song it works. It’s got a catchy hook and a couple of clean verses. Maybe it’ll be able to break through electronic dance music’s stranglehold on pop music. Only one rap song managed to hit the top of the Hot 100 this year and it was “Whistle” by Flo Rida. I know this isn’t exactly pure unadulterated Hip-Hop, but at least it’s better than “Whistle.”

8. Fall Asleep
Produced by I.D. Labs
This song is just awful. The hook is some kid singing the words “fall asleep” over and over again, and the beat sounds like someone was randomly messing around in Fruity Loops. There are beeps and sound effects all over the place, and every once in a while some jittery hi-hats jump in. I think this is supposed to be a chill-out/smoke-out track but I don’t see how anyone could relax to this.

9. Time
Produced by I.D. Labs
“Time” successfully accomplishes what “Fall Asleep” was aiming to do. A bunch of synths float around a laid-back beat and Wiz reflects on his success.

However, there are a few lyrics on this song that sound like Wiz is trying to invent the most absurd rich-person problems anyone could imagine, “Just bought a new crib and there’s not enough space to fit all of my clothes”. 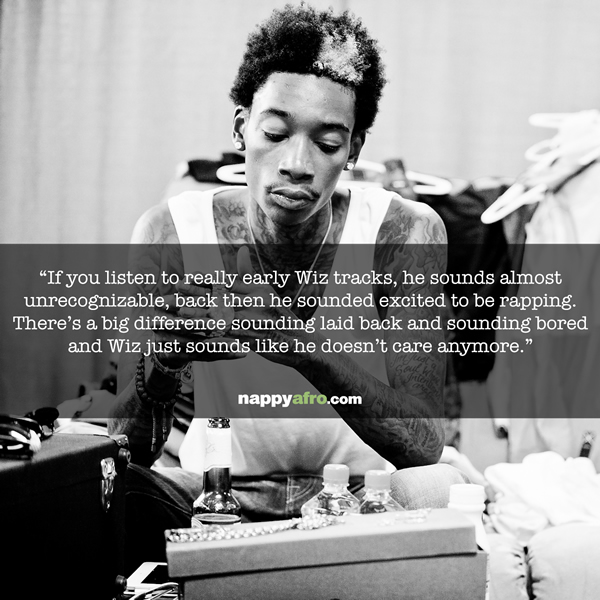 10. It’s Nothin’
Featuring 2 Chainz; Produced by Drumma Boy
2 Chainz recorded over 80 guest verses in 2012 alone, and at this point, they’re kind of getting interchangeable. You have to respect that kind of work ethic though, that’s an almost unbelievable statistic (Especially when you consider that he released an album of his own and went on tour this year). Drumma Boy’s beat makes this song the hardest track on the album but Wiz is still just talking about how much stuff he has. I remember back in 2010, when you would look at the comments on a Wiz Khalifa video, the top comments would all be variations on the “Taylor Gang or die” expression. Wiz might have a bigger audience now, but it seems like he’s lost that insane level of dedication from his fans.

11. Rise Above
Featuring Pharrell, Tuki Carter, and Amber Rose; Produced by Pharrell Williams
This is a great beat, it’s Pharrell’s take on Wiz’s signature chill-out production style, but Pharrell spits an entire verse on “Rise Above” and while he may be one of the greatest producers alive, I’ve never been a fan of the guy as a rapper and this track is no exception. Tuki Carter is one of the rappers on Wiz’s Taylor Gang label and his verse is the best one on the song (His flow reminds me a bit of Devin The Dude). Wiz raps the hook on this track and addresses his detractors.

I personally have no problem with Wiz being rich. More power to the guy for working hard, getting a record deal, and traveling the world. But that doesn’t mean that it’s entertaining to hear him rap about being rich for an entire album.

12. Initiation
Featuring LoLa Monroe; Produced by Sledgren
The songs on this album are starting to blend together, and it doesn’t seem like the subject matter is going to change anytime soon. Wiz and LoLa Monroe (Another Taylor Gang rapper) talk about haters, weed, and money. At the end of this song is a voicemail from Wiz’s fiancée Amber Rose. She talks about how proud of him she is and how she loves him. It doesn’t really add anything to the album.

14. No Limit
Produced by Nice Rec & I.D. Labs
“No Limit” is nine and a half minutes long and there’s a three minute break in that middle that’s all instrumental. I can’t see myself coming back to listen to this entire song very often, but it’s got a nice vibe to it. It would be cool to hear I.D. Labs more often on other rapper’s projects.

15. The Plan
Featuring Juicy J; Produced by I.D. Labs
This is probably the calmest beat on the whole album, but that doesn’t stop Juicy J from threatening to kill people. Wiz’s recent mixtapes have featured a lot of Juicy J verses ever since the Three 6 Mafia founding member signed to Wiz’s Taylor Gang label and I still can’t get used to hearing both of these guys on a song together. They don’t have a lot in common musically. Wiz’s music is all about creating a fun and chill vibe. Juicy J’s music relies on him yelling about women, violence, and abusing drugs over lurching southern beats.

16. Remember You
Featuring The Weeknd; Produced by Illangelo & DPAT
Illangelo is a great producer, and he does his haunted/hazy thing on the beat for “Remember You,” but like Juicy J on the last track, The Weeknd’s style doesn’t mesh well with Wiz’s music. The Weeknd makes druggy depressing underground R&B, and as I’ve said a few times already, Wiz’s music has always been about relaxing and having fun.

17. Medicated
Featuring Chevy Woods & Juicy J; Produced by Danja Wiz closes out O.N.I.F.C. with his best verse of the album:

Back when I was young I had dreams of getting richer
Then my homie Breeze set me down schooled me to the picture
I was with some wild niggas put me on the game
Told me if you tryin’ to make your move you gotta know your lane homie
All you got your name and your words will never break
For this life you pay a price you get a chance you gotta take it
Cause most niggas never make it they stranded where I’m from
Ain’t no conversation all they understand is get a gun
I was riding in my Bonneville hoping I could make it
Out selling peas and smoking weed avoiding police right up the street
Way back in the day before I had all of this paper
Before I had all of these diamonds, before I had all of these haters

For the first time on the album, he’s telling a story and sharing his perspective (On something other than how rich he is). Chevy Woods’ verse is good and he sounds hungry and ready to make a name for himself, in complete contrast to how bored Wiz has sounded throughout the entire album. If you listen to really early Wiz tracks, he sounds almost unrecognizable, back then he sounded excited to be rapping.

Bottom Line:
There’s a big difference sounding laid back and sounding bored and Wiz just sounds like he doesn’t care anymore. Wiz’s longtime collaborator Curren$y is the master of making blazed-out rap that still sounds compelling and exciting and him and Wiz are (supposedly) releasing another collaboration in the near future. Maybe that tape will help Wiz to get back on track.

Overall, there were a few songs on O.N.I.F.C. that I liked, but most of them were very generic and forgettable and a few of them were terrible. The highlight of the album has to be the production, which was great on almost every song besides “Fall Asleep”.