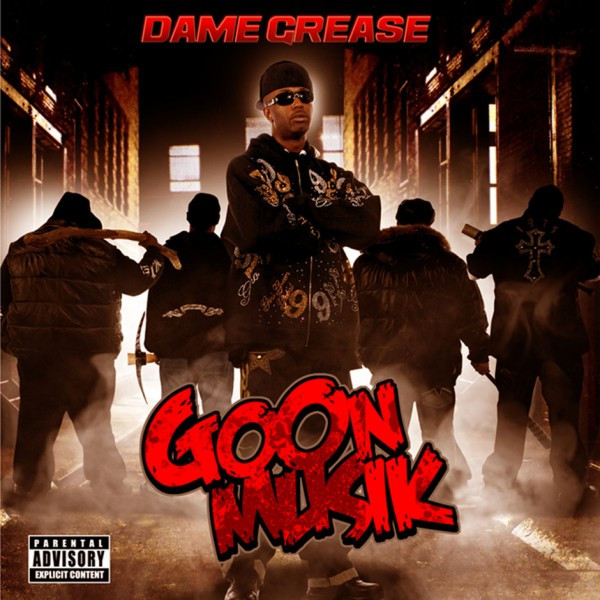 Even though Dame Grease may not have a big name like producers Timbaland or Pharrell, he definitely has a big track record. He has worked with the artists such as Nas, The Lox, Freeway, T.I., Jay-Z, N.O.R.E, Beanie Sigel, Fat Joe, Mary J. Blige, Kelis, and many more. Dame Grease also is responsible for basically producing DMX’s whole first album, It’s Dark And Hell Is Hot (Which might be one of the hardest albums ever!) as well as providing the score for movies Exit Wounds and Cradle 2 The Grave. It’s been 8 years since Dame Grease dropped his 2000 compilation Live on Lenox Ave., and a lot has changed with his new album Goon Musik. Where Dame produced every track and only rapped one track for his first compilation Live On Lenox Ave., he now raps on almost all off tracks while still holding all producing credits for the new album. Where the first album had more star power like Nas, Cam’ron, & Scarface; the new album is full of cameos from unknowns and underground rappers. Should you care? Let’s find out…

1. Goon Musik Intro
“The music you feel when you feel like busting a motherfucker’s head open.” It seems Dame is definitely taking back to the streets on this one as he describes what “Goon Musik” is on the intro while screwed voices and gun cocking sounds are in the background.

2. Lotzilla
Featuring Bigga Threat & Loose Cannons
The first song of the album reminds me of something you would hear by DipSet  (Maybe because both acts are from Harlem). Dame raps first, and while I was surprised that he voice wasn’t half bad, he rhymes leave a lot to be desired. The hook is a little tired too; “You said you rowdy, rowdy/Well look we rowdy, rowdy/Somebody’s wrecking parties/Everybody shake ya bodies”. The Godzilla noises in the background was a creative touch though.

3. 9’s Out
Featuring Meeno & Tony Wink
Hey, it’s Meeno. Remember the guy from Mase’s side group Harlem World? The one who went at Jay-Z on Dame Grease’s first compilation on a song called “I’m That Nigga”? Yea, me neither. The actual beat on this song is good though; the hard bass and pianos do the job. It’s your basic song about having to pull you guns out and not playing games in the street. Nothing really stands out in the form of lyrics though; more thug talking and drug dealing stories.

4. Connecticut Kush
Featuring Max B & Messiah
Speaking of DipSet earlier, ex- DipSet member Max B drops by on this track. Of course he provides his trademark hook singing. While the beat, lyrics, hook and is not the worst, I wish they would venture out more with the lyrics; if you gonna kill 20 niggas by the forth track, at least be creative with it. This is especially true when a song is supposed to be about smoking weed. I also will note that Dame Grese had the best verse here.

6. Bout To Ride
Featuring E. Snaps
At first, when I heard E. Snaps talking, I thought it was Drag-On; he actually raps a little different though. This song is another victim of a weak hook. Of course the song is about being down when the beef hits. Even though so far I not liking this album, I will say Dame does a good job of placing sound effects on a lot of these tracks (For example, he has crowd riot noises on this one in the background).

7. The Tombs
Weird interlude about tombs. The beats sounds like something DMX would wrecked in his early days though.

8. Hustla Dog
Featuring Mysterious & Bigga Threat
The song starts out with a clip from the movie Ghost Rider. It also kept my attention cause I had Mysterious on the track, you know, the big girl who almost made it into the end on Puffy’s first season of Making The Band? Yea, that girl. I’m happy to hear she’s still doing her thing. Besides that the song actually kept my attention with a nice beat and a good hook. It‘s basically talking about working hard in the streets; it’s what I call a New York “crunk” song. Not saying that it tries to be Southern, just that I see New York getting hype over this one in the club.

9. Goon Luv
Featuring Fosho, Tony Wink, & Tanya T6
For somebody who made a beat for a songs like “Feds Takin’ Pictures” & “Niggaz Done Started Something”, Dame Grease came with his “Z” game on this one. It tries to be the ladies/radio song of the album, but it’s just sad. SKIP!

10. Coke Talk
Featuring E. Nast
Guess what this song is about? One clue: It’s not about a soft drink. Grease changes his cadence on this one (Kinda like DMX did on “Ruff Ryders’ Anthem”). The beat gets redundant and even though the song is called “Coke Talk”, it’s really no different than a lot of song already heard on this album.

11. Lenox Ave Boys
Featuring Meeno, Messiah, & E. Snaps
Even though Grease is talented on the boards, its here that I realize that after hearing most of this album, the beats sound a lot alike. This particular song does nothing to stand out; nobody spits anything with style or creativity to make you take notice.

12. Picture Me
Featuring Meeno & Sixx Tray
Why did Tupac ever utter the words; “Picture Me Rolling”. Now almost every thug rapper tries get their Pac on and repeats those words. It still surprises me how some of the album’s beats are third rate though…like this one for instance.

13. Get Yo Hand Out My Pocket
Featuring Tony Wink & Messiah
When the first guy started rapping (Don’t ask me who; I can’t tell anymore), I didn’t know if he was rapping or talking. The beat is not bad, I just don’t know if it’s the best beat to rap over. I kinda liked the hook though.

Bottom Line:
While I respect what Dame Grease has done in his career as a producer and I understand that this album was to strengthen his label Vacant Lot, I’d be lying if I said he didn’t drop a disappointment with Goon Musik. Even though the album could be looked at as homage to early 90’s New York street-inflected Hip-Hop acts like Mobb Deep and Wu-Tang Clan, it doesn’t do that kind of music well. It’s doesn’t do “street-ready” anthems creatively or even different from what you might have already a thousand times before. But why would a talented producer such as Dame Grease drop a compilation that has beats that are lacking? Maybe he was too busy worrying about his rhymes and delivery instead his producing. All in all, Goon Musik is not my kind of music.