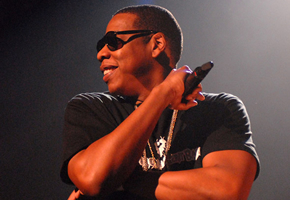 Yeah, I know this one has been the buzz of the “internets” for a whole day, but I might as well put this up for prosperity. This song has already got history: Last night DJ Kay Slay played  a new song by Uncle Murda featuring Jay-Z (At this point, no one is really even sure “Get Away With Murda” is the real title; some say it’s called “He Asked For It”). In the song, it seems Jay takes shots at Fat Joe & DJ Khaled, and of course the “Drama King” Kay Slay plays this up.

The Jay-Z Lyrics In Question:
“Gangsta, Gangsta, how you wanna do this?/I clap niggas down for yappin’ all foolish/ ain’t no stopping this Roc-a-fella movement/The name is Jay Guevera, homie, who are you? and, if your off-beat DJ, anything he play sound familiar?/I’ll wait ’til Pharrell say, ‘Play ‘em.’/Now I’mma have to diss you, Joe. You can get a smack for that, matter fact, the gats will blow….your toy squad will get squashed, Boy–yard dee, you’re lost in the sauce partly because your boss ain’t a leader/He’s a follower/No, I’m not coppin’ ya album or your single, most likely you’ll go copper…”

Well, after all the dust settled, it seems Jay’s verse is like 5 years old. The Uncle Murda verse seems up to date since he says something about Stack Bundles’ death.

And According to Just Blaze:
“So for some reason people think this “new” Jay/Uncle Murda thing is a Fat Joe/Khaled dis. It’s not. It’s also like 8000 years old and somehow dude got his hands on it and put a  verse on it. Now that I recall, it’s Blueprint 2 era..I was going to use this verse for the S. Carter Remix CD but we couldn’t get the Pro Tools in time. Don’t fall for the okeydoke.”

Shit, recently even Fat Joe Said:
“I have no beef whatsoever with Jay-Z. In fact, we share a common goal…helping to get Barack Obama elected on Nov. 4th.”

Well, I guess that’s that. So, what about the actually song? I like it. Both verses are hard; that beat is hard as well as the Sadat X hook. I just wish it was more current. I also can’t wait until a none tagged version drops updated link with better version.