10 Reasons Why Lil’ Wayne COULD Be The Best Rapper Alive 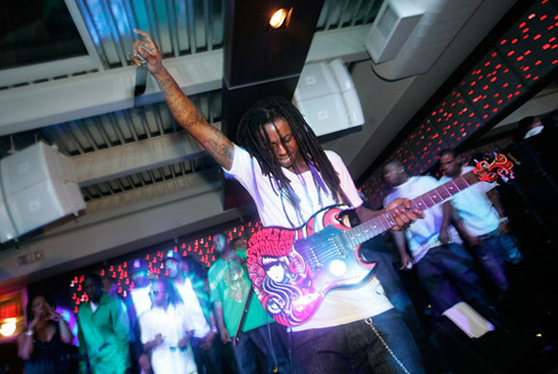 Our dedicated fans remember B-Easy’s column about Lil Wayne, and the reasons he listed why Lil Wayne wasn’t the best rapper alive. Well, while I agreed with him on several points, I ain’t even tryin’ to front, there have been several moments where I have been like: “Damn, Weezy could really be IT!” When I say it, I don’t mean the best rapper ever; I’m going to need a lot more proof before I say that. But I do really think that Weezy is close to being the best rapper alive, and here’s why…

1. His performance at the BET Hip-Hop Awards 2007
This was the first moment where I can recall thinking; “Damn! Weezy done it for real this time.” Everything was perfect: the flames, the song, the emotion, the whole thing was just raw. I rewinded like five times on my DVR, and even showed it to my moms, who was impressed (she still thinks Wayne is ugly as sin). The studio version disappointed, lacking all the emotion, but this still comes to mind whenever I think about Wayne.

2. The Mixtapes
Some of Wayne’s best content has been on the mixtapes that he releases. Da Drought, Dedication, etc. All those were hot as hell. I remember getting into fight about who was the best rapper, and all of the people I argued with, their first defense was his mixtapes. I don’t know why, but he sounds and performs better on the mixtapes than on actual albums. While this doesn’t help commercial credibility, the streets know what he can do, which is arguably more important.

3. Too Many Drugs
B-Easy had this as a downside. I’m putting it as a positive. Even if you didn’t take Health class in high school, we all know that doing drugs makes people do stupid things. It’s a simple fact. However, the same opposite is true: people also get strokes of genius when high. Look at Notorious B.I.G. He came up with “Suicidal Thoughts” while high. Weezy has had plenty of strokes of genius, so let the man do what works.

4. He’s already famous
What’s it matter whether or not Weezy is the best rapper alive right now? He’s only 26! If Jay-Z can be a 40 year old rapper, then Weezy has at least 15 more years left to claim the crown. I’m sure he will do it within that time frame.

5. Young Money Ent.
Jay-Z and Roc-A-Fella was the click to be in 2001, and the fact that Weezy’s Young Money is already almost famous will help. He’s already got something to fall back on if Baby and him ever start arguing (like that will happen). The artists on his label vary: some are hot (Drake & Nicki Minaj), some are garbage (Tyga, but every label has a Peedi…), but he can build up the roster as time goes on.

6. HUGE Fanbase
This man sold “A Milli” in one week. He ain’t going ANYWHERE anytime soon. Sure, a lot of his fanbase is ignorant, I’m not going to lie, but you know, who’s fanbase isn’t? The average Hip-Hop fan nowadays hasn’t heard the classics. Some don’t know who dead prez or De La Soul are. They haven’t heard the classic albums from The Roots. But hell, what about during the East Coast-West Coast feud? You think the brothers on the West were even paying attention to what Nas had to say? The East was still arguing his cover was stolen from Biggie! It’s happened to everyone, so even having a large fanbase is still good.

7. Hardly any competition
Yeah, the greats still exist. Andre 3K, Hov, Em, Nas, etc. Plus we still got veterans like Luda, Lupe, T.I. Jeezy, Kanye, etc. Still, hardly any of these people can match Weezy sales wise; Nas barely went Gold, Hov struggled to sell Platnum with American Gangster, Lupe did the same as Nas, T.I. still ain’t touchin’ him, same with Jeezy, Luda barely went Gold, and Kanye is barely right there with him. Only Em and Andre 3K are the only people I’d say could beat 3X Platnum. Weezy can take on all of the newcomers; there are hardly any people in Weezy’s age group that can match him.

8. All his best material leaked
This is probably one of my number one reasons: Tha Carter III could have been classic, or at least near-classic, but all the good songs got leaked! He had to push it back several times, make more new content, and then more content would get leaked. I think if the material that had been leaked hadn’t gotten leaked and made it on the album, then it would be much better.

9. “I’m Me”
This almost shoulda been #1 to me. I mean, this one song sums up perfectly why Lil’ Wayne could be the best rapper out right now. The beat is like majestic, just crazy, like Weezy is already king. His raps are just fire: “I know the game is crazy, it’s more crazy than it’s ever been/I’m married to that crazy bitch, call me Kevin Federine…Yes I am the best, and no I ain’t positive I’m definite/I know the game like I’m reffin’ it/This is Tha Carter, Tha Carter III, the new Testament/And I’m the God, and this is what I bless ’em with”. Damn. Notice the “Tha Carter III” line? Yeah, this was gonna be on Tha Carter III. Imagine if all his songs like this were on the album!

10. He’s already in your Top Ten
When I say “your” top ten, I know there is about to be a lot of criticism there: “He’s not in MY top ten”. Well, he’s in mine. I’m not going to go into my top ten, but I know Weezy is in there somewhere. The point here is that it’s easy to go up in rank once your already there. Every rapper doesn’t start at #1. It takes time to build your way up and make it there. Weezy is only 26 and in the top ten, so give it at least 5 years I’d say, granted he’s put the guitar down by then.

Bottom Line:
Weezy has got to do at least five things before he can claim to be the best.
1. He’s got to get rid of the Guitar. If you gonna be the Best Rapper Alive, be the Best RAPPER Alive.

2. He’s got to set a bar for himself, and stop releasing all these songs just for the hell of it. No more “Pu$$y Monster” bullshit.

3. He gotta stop over saturating the game; you never saw any of the greats doing that, and for a good reason. The more exposure you get, the more people get sick of you. Remember how you hated “Lollipop” after the 100th listen?

4. He gotta work with the greats more. Greatness plus greatness equals greatness. Remember how “Mr. Carter” was the joint for a while? It wasn’t cause people were arguing over who won, it was cause it was a great record with two titans, similar to “Black Republican” (which is on some classic shit). How dope would it be for Wayne to hope on a DJ Premier track? Even the Wanye stans gotta be drooling over that!

5. And this is the most important one, and obvious one. He gotta have a REALLY good album. The Blueprint, for example, which reached all the corners of Hip-Hop to make a record everyone loved. Tha Carter II is definitely his best album, at least in my opinion. He reached out to 3 million fans with C3, but some people still aren’t convinced, and probably some will never be. But it really hurts Wayne’s resume that he has NO classic albums. He’s about 1 hour away from a classic album in my eyes. As soon as that album drops (Tha Carter IV, hopefully!) we’ll see.

One more thing I want to say before I stop. I know I compare Jay-Z and Wayne a lot, but consider that endearment: I see Wayne as the future #23 of the rap game (Not Kanye. You heard him; he’s Kobe). While he’s got a lot of people to convince, I think that he’ll do it and prove finally he is one of the greatest to touch the mic.