Top 5 Ways NOT To Promote Your Music 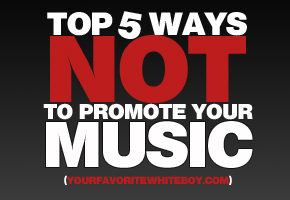 By now you already know that B-Double drops knowledge. You already know we cool (There was this mixtape we did together a few weeks back…). Well, pull up a chair because B-Dub is dropping more science and this time he’s giving recommendations to rappers and their marketing reps. As usual, be sure to check out the dopeness that is YourFavoriteWhiteBoy.com – B-Easy

Look, I understand that the music industry is a tough place to be right now. Album sales are down, label pressure is up and every artist is expected to post Weezy numbers. In a bid to sell enough albums that their A&R still returns their calls, rappers are looking for any way to keep their name in people’s mouths and on their computer screens.

But it is starting to get ridiculous. I can’t go 2 minutes without getting a new video, song or mixtape jamming up my inbox. So, as a public service to all the other bloggers, web site owners and readers alike, here is my advice to rappers and their marketing reps. Summary: sometimes, less is more. Get me? In any event, let me serve it up:

1. Trailers for music videos
There was a time when debuting a new video on TRL or BET (when they still played videos) was a major marketing activity. It was the visual interpretation of your artist’s product and can help build buzz. But creating a trailer for your own 3+ minute video is just madness. Your director is not Francis Ford Coppola and you definitely are not Al Pacino. Let’s keep things in perspective.

2. Calling Your Album A “Classic”
The homie Guy Fawkes over at Hip Hop Head touched on this as well, but too many of your favorite rappers are putting their album title and the word “classic” in the same sentance. I realize that rap was built on bragging, but only fans can dub product worthy of such a title.

Even worse is when you’re throwing that word around and the only person who’s heard your joint is you. Its called managing expectations. And keep your label from hyping you up to fail. Who thinks Pray IV Reign fits that title besides Dame Dash? Steve Rifkind calling Asleep In The Bread Isle a Top 5 album? With a straight face? Uh, yeah.

3. Dropping Every Single Before The Album Drops
Nothing wrong with pushing out a single or two to whet the appetite, but a gang of artists right now are pretty much dropping virtually their entire album before the release date – one song at a time. I pretty much had all of Asher’s album before it came out and there must be 8 or 9 releases from Busta’s new joint.

And this isn’t just happening with signed artists. In the everyday struggle to get a record deal, unsigned rappers are throwing out singles like they’re at a gentleman’s club. Just stop it.

4. Prequel Mixtapes
I’ve seen a few of these, where artists try to build buzz by dumping old material as a “new” mixtape. This is not unlike pushing out a “greatest hits” to satisfy a label contract. If you were/are as relentless in the booth as Tupac and have a ton of unreleased material, then this is a good way to drop a gem to fans to get them buzzing about your new stuff. If you’re Jay-Z and your catalogue isn’t a little thick because studio time is as rare as a lunar eclipse, the strategy may not work. Just annoy.

5. Twitter Countdowns
If people care enough about your music to follow you on Twitter, its a good bet that they are pretty much up on what you’re doing. So its a little redundant – not to mention frustratingly excessive – to use Twitter to give us daily updates on how many days are left until you bless the public with your product. A few days notice, tops, will suffice. Its not like we don’t know where to find our local record store or there will be a mad rush on copies of your latest opus.

Sorry to break the bad news.