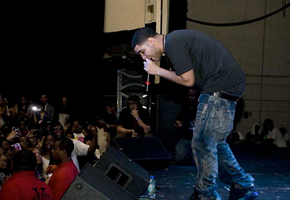 The other day, me and King Jerm were talking about just how real (or not real) the the buzz on Drake is. Not to say he isn’t the hottest in the game right now; he is. But the expectations on this kid are tremendous. Then there are the questions: How good will his debut album Thank Me Later be? Was it a good idea signing with Cash Money? How much will he sell in his first week? After the “Best I Ever Had” video, how’s his female fan base? Matter of fact, after the BET Awards’ performance, how’s his fan base period? Did he give away too much with So Far Gone?

Oh yea, the song. This is the first leak off his upcoming album Thank Me Later. It’s produced by the Bizness. I got to hand to Drizzy; this is not bad at all. No singing here. Just him rapping. And about all the questions before? We’ll see later this year. The world will be watching.