The Numbers Game: Slaughterhouse Is #26 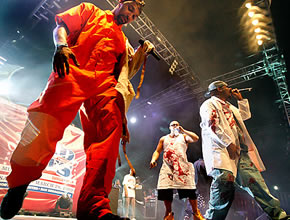 This week we only have one notable Hip-Hop entry on the charts: Slaughterhouse. Now is selling 18,000 copies of their self-titled album a good thing or a bad thing? It depends how you look at it. On the bad side, they didn’t crack the Top 25 or 20k in sales. They also had a lot of “internet” hype around them, not to mention a video that got rotation on MTV2, plus they are also currently touring on the Rock The Bells Festival. On the good side, this is a heavy lyrical Hip-Hop album that just missed placing in the Top 25 with almost no radio play (They definitely didn’t break the bank in terms of promotion). Plus, this is the first chance for most of Slaughterhouse members even being this high on the charts. Personally, I would have liked the album to do better because I felt these guys could take Hip-Hop towards better rhyming and more talent. Either way congratulations are in order Joell Ortiz, Royce Da 5’9″, Joe Budden, & Crooked I. If you haven’t already, check out the review of Slaughterhouse’s album by yours truly. There are already reports that we may can expect a second album next year. That’s a good thing.

Speaking of Joe Budden; I can’t find any information on the sales figures on his latest album EP Escape Route. And with all the delays and no promotion, I expect that it didn’t even chart. Hopefully he’ll do better with The Great Escape later this year.