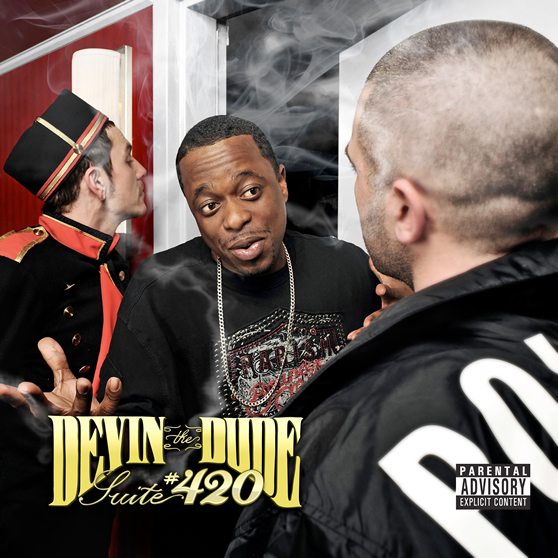 I remember when I first discovered The Dude. I saw the CD case laying on the floor of my boys ride, and the infamous pic of a guy on the toilet reading the paper had me in stitches. I HAD to hear this cat who had the gall to take that pic. That was 12 years ago and now Mr. Boo Boo’n is on his 6th studio album with Suite #420.

Devin fans know what to expect when he drops a album. His game is relatively unchanged in 12 years. There will be talk of weed, sex, hoes, weed, sex, and then hoes again. The thing that keeps fans involved is his sense of humor and his laid back style. No matter if he’s singing or flowin’, he’s always so chill that you can’t help but feel high even if you aren’t.

The album comes in with a silly ass intro, but after that, the album really kicks off. “We Get High” comes in with his signature laid back beat, flow, and hook. Devin’s delivery is on deck and this song is nothing less than classic Devin. “Still Comin’” is a cool track that has Devin kick some advice and reminding us that he’s still in the game. “Pick My Brain” has a real throwback feel to it, but somehow still comes off fly. The hook was a little to choppy for me, but it works. One of the funnier songs on the album is “That Ain’t Cool” where we talk about side broads that shit to mark their territory. It’s funny on wax, but back in the day…While the next song isn’t original, it’s funny as hell and a smooth groove. “I Gotta Ho” is in the same vein as those various other “I gotta girl to do this and that” songs made by several artists. “What I Be On” rides the line between annoying and infectious as far as the track goes. I like how Devin sings on this one and I can see this one being blasted in the ride on these summer days.

The next track “Ultimate High” maybe the song for the hardcore fans or something. The storytelling, the hook, and the track are all pretty bland to me. For those that love his singing, “I Can’t Handle It” may be your jam. It’s not a bad song, I realize that it may just be me not feeling it. However, the next song, is terrible. “Where Ya At” is a skip song by all means.

The rest of the album is marginal at best with another funny little interlude. By this point in the album though, I’m sure it gets over if you’re high, I mean, 15 songs in, you should be anyway.

Bottom Line:
For the chokers and hardcore Devin fans, this is probably going to be right on par with what you expect. The method and process is still the same as his first 5 albums. I think this one has a little less smoke/chill factor to it which is odd considering the name and date of release being the weed smokers holiday, but as an album, it’s another cool album from Devin. In our review of Landing Gear we questioned how he continues to fly under the radar. Well, that album as well as this one are the answer. He simply stays in his lane, that’s where his fans want him, and I get the feeling he’s comfortable there.