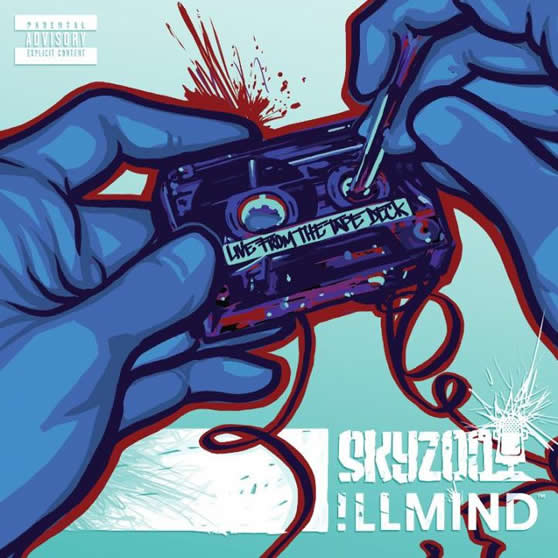 Imagine a world where analog still dominated the media with the digital age far from arriving, where iTunes and Rhapsody didn’t exist with Mom & Pop stores being your source for new music, where the ability to carry hundreds of albums and thousands of songs on one device wasn’t an idea yet with cassettes and a Walkman defining “music on-the-go”. Kinda sounds like the 90’s (80’s) huh? Well that’s exactly the mindset necessary while listening to the new album Live From The Tape Deck from Skyzoo & Illmind. Sure in 2010 it’s “all digital everything”, Mom & Pop stores are harder to find, and everybody by now has some form of iPod, but for a little over 40 minutes Sky & Ill take you back musically to a time where cassettes and ghetto blasters made the world go ’round.

Those whose musical taste aren’t not totally marred by mainstream/commercial artists may be familiar with the duo and what they are capable of individually. On one side you have Brooklyn emcee Skyzoo, known for his battle with Jin on 106 & Park’s Freestyle Friday and album releases including Cloud 9: The 3 Day High (w. 9th Wonder) and The Salvation. Opposite you have New Jerz producer Illmind (or !llmind), widely known on the underground scene for his superior productions for acts like Little Brother, Sean Price, and Boot Camp Click as well as a collaborative album entitled The Art Of One Mind (w. Symbolyc One). On Live From The Tape Deck Skyzoo combines his lyrical prowess with the diverse production from Illmind to produce an album worthy of the title it bares.

If you couldn’t conclude from the album title, the sound of boom-bap is prevalent throughout as Illmind draws inspiration from great producers like J Dilla and Rick Rubin infusing different styles seamlessly. Handling all of the album’s production, Illmind crafts some bangers for Skyzoo to exercise his lyrical abilities on as heard with tracks like “Barrel Brother” (f. Torae), “#AllAboutThat”, “The Burn Notice” (f. Sean Price & Rock), and “Frisbees”. A close listen to “Frisbees” displays Skyzoo’s creativity as an emcee as he starts every new line with the last word of the previous line with relative ease. What other rappers do you know who put that much care into their rhymes like that rather than just dropping a quick 16 in the stylings of B.I.G. and Jigga.

Being that it is a collaborative album, Skyzoo does a bit of collaborating throughout the album with the likes of his Duck Down fam Heltah Skeltah and Buckshot, along with Rhymefest and Styles P. But the most chemistry has to be with fellow New York emcee Torae as heard on “Barrel Brothers” as they trade bars in fantastic fashion. This chemistry comes as no surprise dating back to their earlier collaborative work on tracks like “Click” and “Get It Done”, so the fact that a collaborative album (Barrel Brother’s Corner) between the two is in the works is fantastic.

The only minor misstep to be found on the album is “Understanding Riley” (f. Rhymefest) which is just below the bar set by the other tracks heard. The snippets of The Boondocks, Do The Right Thing, and Lebron’s The Decision heard before and after select tracks are nice additions that keep the songs flowing smoothly. Those listeners that aren’t too particular to the latest albums from Gucci and Waka and want a change of scenery in terms of quality music should look no further than what Skyzoo and Illmind offer with Live From The Tape Deck. If you’re a member of this generation like me who spent his childhood in the 90’s, this album allows you to experience a time from an era that defined not only Hip-Hop music but did so minus iPods and illegal downloads.

Bottom Line:
Coming into it collaborative albums are always a risk as it’s never known if both sides have enough chemistry to produce a good album. We’ve seen examples of this work (Jay-Z/R. Kelly, Nas/Damien Marley, John Legend/The Roots) and examples of it bomb (Jay-Z/R. Kelly, Bow Wow/Omarion), and luckily Skyzoo & Illmind fall into the first category of success. Live From The Tape Deck presents a nice collection of songs to be enjoyed by all that appreciate good music at the essence of Hip-Hop. They do a good job of keeping the “cassette/90’s” theme flowing throughout never really resorting to a more modernized sound to fit what’s popular in 2010. In the end Live From The Tape Deck is a solid album for any collection whether the format is a digital file, compact disc, or vinyl record (I don’t think cassette copies of this album were even made… Ironic?).