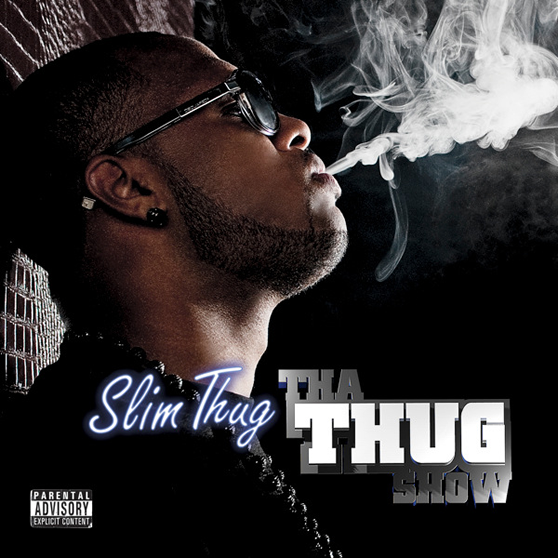 It’s very few rappers in the game that put on for the city harder than Slim Thug. When you listen to Thug, you know what you’re getting: Texas rhymes and heavy Houston beats. But that’s why fans love him. On his third album, he is introducing the world to Tha Thug Show. If you think Tha Thug Show means flossing, getting money, taking your girl, and being a boss, you’d probably be right. Let’s tune in…

1. Tha Thug Show
Produced by FIYA
“You tuned in the Tha Thug Show”. Over a bass heavy track, Slim Thug goes over his usually subjects like flossing, getting money, taking your girl, and of course, being a boss (Told you). Nothing new in terms of subject matter but this gets the job done.

2. The Sky
Produced by Mr. Lee
I like the use of the piano sample here, but as soon as we get to that poorly sung hook, I’m immediately taken out of the track (It sounds like Mo B. Dick. I know it’s not but still…).

3. Gangsta
Featuring Z-Ro; Produced by Mr. Lee
This was the album’s first single. Even though naming a track “Gangsta” isn’t that original, I like it. Besides being another example of Thugga putting on for his city, Z-Ro killed the hook (Ever since hearing “Mo City Don”, I think I’ve secretly been a Z-Ro fan). Check out the equally gangsta video here.

4. How We Do It
Featuring Rick Ross; Produced by Lex Luger
Hip-Hop biggest self-proclaimed bosses once again connect. My main problem with this song is the production by Lex Luger. It’s just sounds like he is chopping up “MC Hammer” & “BMF” over and over again at this point. If I never heard of those songs, I might have loved this one.

7. 100’s
Featuring Big Chief & Lil’ Keke; Produced by Mr. Lee
This song might have sounded better if it wasn’t placed right after a song that has a similar format (I know both were produced by Mr. Lee but still…). The song is produced is a bit better with the drum pattern but it should have been placed elsewhere on the album.

8. Beat It Up
Featuring Dallas Blocker; Produced by Mr. Lee
Slim Thug reminds the ladies why his name is Slim Thug:

Baby girl listen up. Let me holler for a second
I ain’t trying to rude I’m just trying to get you naked
I figured if I kept it one hundred you’ll respect it
I know you tired of niggas lying to you so check it
I ain’t trying to settle down but I wanna fuck
I wanna be behind you when you back that pussy up
You look like a good I wanna make you my slut

Todd Shaw would be proud.

9. So High
Featuring B.o.B; Produced by Nard & B
This is most popular song on the album due to the assist from Bobby Ray and it being the second single. I was never in love with this track but I do understand that it was made strictly for radio play. I guess it does what it’s suppose to. Check out the video here.

10. Free
Produced by Play-N-Skillz
What the hell is this shit? It sounds like Thugga rapping over Tom Petty. Naw homie. SKIP!

11. Celebration
Produced by Mr. Lee
“It’s a celebration!” Here Slim Thug raps about, uh, celebrating. Of course it’s your usual from Slim Thug but for some reason the beats sounds unfinished here; like something was left out. (*Shrugs*)

12. Caddy Music
Featuring Devin The Dude; Produced by Mr. Lee
The beat samples from of Monica’s “Knock Knock” which samples from The Masqueraders’ “It’s A Terrible Thing To Waste Your Love”. Either way, this is by far my favorite track off the album. The song is smooth and adding Devin to the party only adds to that. Ross may have “Maybach Music” and “Aston Martin Music”, it’s still room for “Caddy Music”. Sidenote: Who is that third guy that raps here?

13. Coming From
Featuring J-Dawg & Big K.R.I.T.; Produced by KC
I remember Pitbull pointing this song out in the Forums and he was right, it is a standout track on the album. The production is soulful and makes the track mean more. All rappers here get introspective but Big K.R.I.T. has the best verse: “Let the curtain fall, fuck the laws and the judge/Sending niggas up the creek for selling drugs they gave to us”. This is one to check out. Anybody know the sample used here? It samples “Delta Man (Where I’m Coming From)” by Gill Scott-Heron & Brian Jackson.

14. Murda
Produced by Beanz N Kornbread
Thugga goes right back at it with this one. As the title says, we go on a ride for a 187. Slim Thug’s storytelling ability won’t have you ranking him with Biggie, but it’s not terrible either. The song as a whole makes okay for an album cut.

15. Do It Again
Featuring Keisa; Produced by Mr. Lee
As soon as the song start I recognize the “Do It Again” sample by The New Births. I love this sample (Some of you may remember Lil’ Wayne used the same one for his version of “Do It Again”). Mr. Lee gives it a Houston twist which makes it perfect for Slim Thug to close out the album: “If I just measure my past I’m doing better than fine/And it’s sad to see how many I had to leave behind”.

Bottom Line:
This album was hard for me to rate. While I’m a Slim Thug fan, I realized that at the end of it all, I only really liked four songs out of fifteen. That’s not a good ratio. The album could have been better by trimming some songs off and rearranging a few others. With Mr. Lee producing a bulk of the album, it also seems songs were to similar. Some will even point out that at this point in Thug’s career we should see him span out more in term of subject matter. But with lack of growth come a bright side: Slim Thug will satisfy his die hard with this album. And doesn’t that count as another win for Houston?