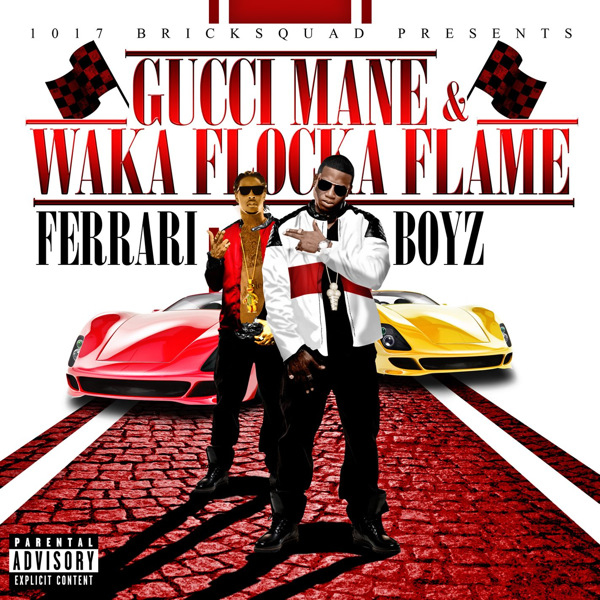 If you live in the South, the biggest collabo you were waiting wasn’t Watch the Throne, it was the collabo from Gucci Man and Waka Flocka titled Ferrari Boyz. I will let you catch your breath for a second before I continue….Alright. Now that we have regained our composure…I will continue the review.

*sub story* I really didn’t understand the appeal of Waka until I listened to his Salute Me Or Shoot Me 3. After a couple of spins, a couple L’s, and some games of Madden…I got it. *end of sub story*

Ferrari Boyz
Produced by Drumma Boy
The dynamic duo kicks the album off with their lead single that was actually on the Salute Me 3, so I’m familiar with it. I really like the beat on this one. Drumma Boy sounds like he fell out of that slump he was in when he was selling the same beat over and over again. As far as the lyrics go, you know what it is, Gooch and Waka hood stunting on the track. This is their answer to “Otis”.

15th And The 1st
Featuring YG Hottie; Produced by Southside & Lex Luger
It didn’t take long for them to go to the classic sound and turn the NIGGARDLY LEVEL UP (© MIstagoodbar) on the track with this one. First off, the beat beats through the speakers and Gooch and Waka did what they do best. Go stoopid on the beat. I LOVE THIS SONG right here.

Break Her
Produced by Schife
One thing this album is not lacking is dread swinging beats. I can really see why niggas like those BrickSquad niggas. The fucking beats go SO HARD. Pause. I mean you nodding so hard with the beats; you overlook the ignorant stuff they saying.

Feed Me
Featuring Frenchie; Produced by Southside & Lex Luger
Waka and Gucci give you something to jam to while you at the strip club and I can see the money raining from the ceiling when this one comes on. If this song comes on in the booty club and you not throwing bills around like Pac Man Jones…you not a live fellow.

Mud Musik
Featuring 2 Chainz; Produced by Southside & Luger
2 Chainz makes an appearance on the album and I can tell this track will be chopped & screwed in no time. These cats might have made an anthem for the people that like getting wasted. The syrup is flowing on this song like a maple tree in Vermont.

I just slow sip (Pour me up) Styrofoam cup (tripled up) this that mud drank, 4 ounces in a one liter.

2 Chainz is gone be the next voice of the streets…watch what I tell you.

In My Business
Featuring Rocko; Produced by Shawty Redd
The first beat that I didn’t like on the album was this one. It’s not bad; it just didn’t beat as hard as the other ones. Gooch and Waka didn’t sound at home on the track as it just didn’t fit them at all. Rocko has been making some noise on the hood circuit lately, but he too sounded out of place on the track. I’m not a fan of this one.

This one for the young niggas.

They said that shit. I agree. This one has the ignorant levels turned up and the “young niggas” gone love this one. This song even makes my old ass feel like a young nigga. I might go buy a snapback, sag my pants, and cop some Dunks. RIP CAMOFLAUGE.

Suicide Homicide
Featuring Wooh da Kid; Produced by Southside & Lex Luger
The Jordan and Pippen of Hip-Hop speed up the tempo on this one and show some versatility on the track. I bet you didn’t know that Gucci and Waka had the master flow fast or slow did you? They made up for the average beat.

I Don’t See U
Featuring Ice Burgundy; Southside & Lex Luger
Back to what was working. Hard beats and catchy hooks that will have the listener participating. I don’t like this Ice Burgundy guy; he should have switched places with Rocko on the album. That would have been much better. Waka showed that he was a student of the game on this song where he name dropped Jay-Z.

Pac Man
Produced by Southside & Lex Luger
This is the Ferrari Boyz version of “Pac Man”. I don’t see Manny Pacquaio coming to the ring on this one. I mean if he did, that would be AWESOME, but I doubt it. Imagine Mayweather vs. Pacquiao and he comes to the ring with Gucci and Waka?

Stoned
Produced by Shawty Redd
This one is for the smokers. I did learn something on this track. Obama = brown and white liquor mixed together. For some reason I think Shawty Redd messed up the flow of the album with his two beats. BOTH of his offerings have been suspect.

She Be Puttin’ On
Featuring Slim Dunkin; Produced by Southside & Lex Luger
The dread shaking music is back and they showing love to them ladies that don’t ask for nothing. They are not talking about the ladies that are too good for a meal at McDonalds. I mean who wants to talk to a girl that she is too good for a McDouble? Not me.

So Many Things
Produced by Fatboi
Fatboi is one of those producers that should get more work. He is that nice. I have to say that Gucci killed this verse. This might have been his best verse he ever spit. No shit. I was impressed with Gucci on this one. BANG THIS ONE!

Too Loyal
Featuring Slim Dunkin; Produced by Fatboi
Damn…back to back Fatboi tracks? This one is totally different from the last one and this one has me shaking the dreads. I would think OJ Da Juiceman would make an appearance on this one…matter of fact he hasn’t made ONE appearance. That might have been a good thing. They really picked up the swag level on this one.

What The Hell
Featuring Rocko; Produced by Drumma Boy
They end the album with one for the trappers. I was hoping they came back to this. There is a good chance the next time you go see your local dealer, this will be playing loud as hell as he serves you. At least that is how it was when I went. I’m glad that Rocko got to rap over a better beat this time around.

Bottom Line:
I know the comparisons between Watch The Throne and Ferrari Boyz will be going on for a while, I just want you guys to understand is that they are doing all of this under the radar. You not getting a bunch of floss on the album, these dudes are not out to make you feel bad about your regular ass life, they not out there trying to be deep or say enlightening lyrics. They are out there making music for you to get high to, get drunk to, party to, ride to, play video games to, and most importantly, SWAG TO! This is what you get when Gucci and Waka connect.