Azealia Banks Signs With A Major Label & Why You Should Care 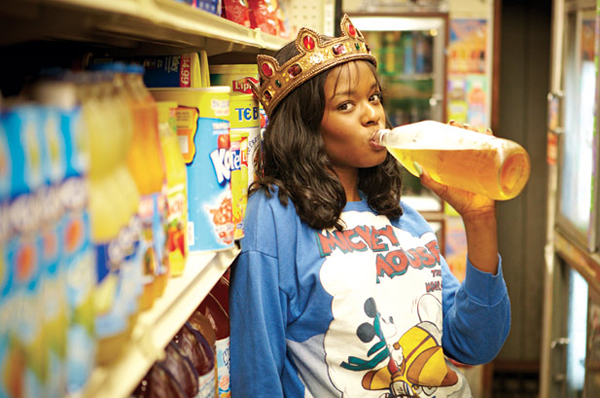 I’ve posted things about Azealia Banks before but just not on the main page of nappyafro. To be honest though, I only know like maybe three  songs by the Harlem born rapper (“L8R”, “212”, & and the recently released “NEEDSUMLUV (SXLND)”). Azealia been getting some heavy press lately with 2012 maybe being her breakout year as she’s recently announced that she signed a deal with Universal Music (With an album maybe dropping in May or June of this year). Not familiar with Azealia? Why should you care about another new female rapper? I’ll provide few points…

Some thought Kanye West was gonna sign her:
Doesn’t take much for the rumor mill going and in this instance all it took was a Kanye follow on Twitter and a few Azealia tweets. Obviously the G.O.O.D. Music signing never happened but it’s good that she has Yeezy as a fan.

She’s already dissed Kreayshawn:
Azealia doesn’t even want Kreayshawn as fan (Did you see their Twitter exchange?) let alone be mentioned in the same lane:

As much as Kreayshawn would love to be considered part of this ‘rap game,’ she’s not. I guess a part of me is kind of annoyed that those white girls are making these songs, and it’s like if these girls were black and making the same songs would you be that interested?

She respects Nicki Minaj but expects more from her:
Although she has love for the Harajuku Barbie and even went to the same high school (LaGuardia High School of Performing Arts), she also expects Minaj to continue to innovate:

The butt, the hair, the this, the that, all the other shit, like… As much respect that I have for her, we’ve seen you do this already, what else can you do?

She brings something different:
Azealia falls in the category of being bigger on Pitchfork than in the hood, but you can’t say she isn’t trying to do her own thing. Actually, at this point she’s bigger in the UK seeing that her song “212” has already charted there. She does spit explicit lyrics just like a lot of her female peers, but I think that’s where the sound comparisons end.

And here’s an interview she did with BBC as well as some music: