The Spider, Wrapped in Sonnen’s Web 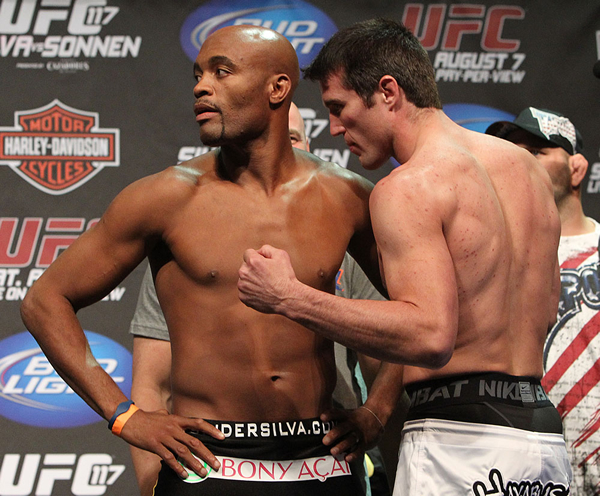 Two years after their first meeting, Anderson Silva still hasn’t silenced Chael Sonnen and his endless stream of absurdity. Despite being submitted by the champ in August of 2010, Sonnen still won’t shut up. In fact, he’s gotten louder. He’s gone as far as declaring himself the UFC middleweight champion while carrying around a plastic replica belt that can be found on Amazon for $22.99. While most fans including myself simply laugh at Sonnen for what he is, an entertainer, Silva takes his remarks very seriously. Silva is a person who values respect and he shows this by giving respect to those around him including his enemies. He exhibited his reverence by bowing at the feet of Sonnen immediately after winning their first match. This was after weeks of torment from Sonnen’s absurd but disrespectful comments. One of my favorites was “I can drag Anderson Silva out of a hotel and beat up him anytime I want. I’ve made a commitment to wait until August 7 and I’m going to do everything I can to make sure millions of people watch me do it.”

Since his first loss to the champion, Sonnen has talked his way to fame and has earned a rematch with the Brazilian. He has truly out-done himself in the past few years, making his statements prior to their UFC 117 bout seem tame. He’s spun such a huge web of nonsense that the Spider seemingly can’t escape. Silva will reluctantly rematch the loud mouth this summer and possibly be free from his web of bullshit.

Silva’s reluctance to fight Sonnen a second time stems from comments Sonnen made regarding Silva’s Black House teammates. Sonnen spoke negatively about Brazil and essentially called the Noguiera brothers naive of modern technology and stupid. He discredited their value, skill level and relevancy in the sport. Naturally, as a student of the brothers, Silva was offended and angry. In an interview, Sonnen said, “I don’t have a problem against the Brazilian people. I have a problem against the Brazilian government. The government of Brazil has refused to extradite Black House. Black House needs to stand trial in America for crimes against integrity.” He then, made comments about Silva’s wife. He said he would break into Silva’s home, pat his wife on her ass and tell her to make a steak for him, medium rare, how he likes it. It was after these comments that Silva appeared to truly be agitated by his rival. Silva has spoken to interviewers about how Sonnen is disrespectful and undeserving of another title fight. Silva says that he understands the need to promote in this sport but he thinks Sonnen has gone too far. He also believes Sonnen to be a cheat because of his use of testosterone replacement therapy.

Sonnen is such a nut that he even used his failure of a drug test for steroids as an opportunity to boast. After the California State Athletic Commission found him to be utilizing, what was later found to be medically prescribed, exogenous testosterone, he said, “You’re telling me I’m one-tenth higher than the average man? Re-test that. You must have caught me on a low day.” He also claimed “Chael Sonnen’s too goddamn macho for the standardized testing procedures of the California State control board.” He seemingly will never miss an opportunity to either disrespect Anderson Silva or blow his own horn. Despite his focus on Silva, he apparently doesn’t set anyone else in the company out of bounds. According to this statement of his, even 265+ pound Brock Lesnar doesn’t intimidate him enough to keep him quiet.

“If Brock Lesnar was here right now, I’d take my boot off and throw it at him, and he’d better polish it up before he brings it back to me. Talking about he’s the baddest guy in the UFC? Brock, quit eating so many raw eggs and doing push-ups because it’s affecting your realm of reality. Are you kidding me? I’d slap you in your face, and you wouldn’t do anything. ‘I’m Brock Lesnar. I’ve got this $5 haircut and a knife tattooed on my chest.’ I’ll shove it up your face if you get in Chael Sonnen’s way.” 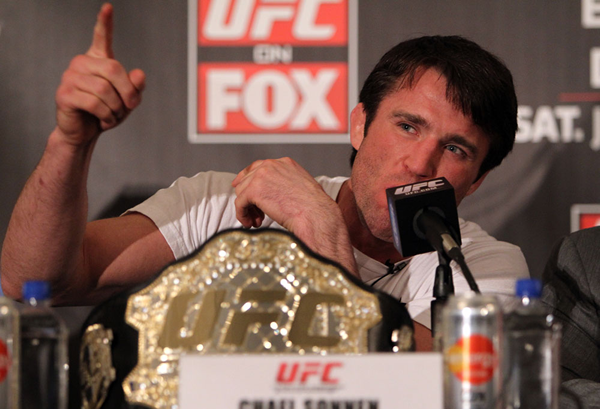 The seemingly infinite number of Sonnen interviews on YouTube is quality entertainment. His statements have become more ridiculous over time. It’s gotten to a point where no one really knows when he’s being serious. Ironically, the only true statements he makes are those about being able to dominate Silva physically. In 2010 he did just that and hasn’t stopped bragging about it. He’s disputed the integrity of Silva’s title by carrying around a plastic UFC replica belt and making several statements including, “In what parallel universe can you punch a man 300 times, he wraps his legs around your head for eight seconds and they declare him the winner? On the streets of West Linn, Oregon, if you lay on your back with your legs wrapped around a man’s head for eight seconds, that does not make you a winner. That makes…not a winner.”

When asked about his expectations for the rematch, Sonnen claimed the fight will be a boring, one-sided beating with him “swinging the hammer.” He’s been asking for this fight for two years and has added incentives to lure the spider in. Immediately after his domination of Brian Stann, Sonnen said in his post fight interview with Joe Rogan, “Anderson Silva, you absolutely suck! Super Bowl weekend, the biggest rematch in the history of the business. I’m calling you out Silva, but we’re upping the stakes. I beat you, you leave the division. You beat me, I will leave the UFC forever.” He later claimed the offer had expired since Silva didn’t respond.

Silva has made few statements about a rematch. As possibly the most skilled fighter in the world today, he most likely doesn’t feel the need to speak. Actions do speak louder than words. Recently he’s made claims that he won’t be taken down by the wrestler this time. He said that Sonnen was able to dominate him for the majority of the first fight because he had broken ribs.

The rematch is scheduled for UFC 149 in Rio de Janeiro, Brazil in front of, a record breaking, 80,000 spectators. This is bound to be the biggest event the promotion has hosted and Sonnen is doing everything in his power to fill every seat in the soccer stadium.

While I expect Silva to win the rematch, Sonnen’s comments have convinced me that anything is possible. Sonnen can honestly say he’s beaten up the best fighter in the world and he very well may not stop saying it. With his mouth, he has turned this matchup into one of the biggest rivalries in the sport, comparable to the Jones versus Evans situation. I leave you with a few of my favorite Chael Sonnen quotes and his highlight real of greatness.

When asked about his intentions after fighting Silva he said, “I put Anderson Silva out for a year and when I’m done with that I’m going to put GSP out for a decade.”

When discussing how he may end his MMA career he stated “I think when my fighting future is done and my athletic ability has diminished I’ll probably join the NFL.”

When speaking about Silva’s manager and translator he said, “Anderson just fired Ed Soares and replaced him with a Translation App he got on his phone for $14.95.”